Investors continue to rotate into stocks more sensitive to economic growth after Moderna Inc.'s vaccine trial update lifted shares Monday, adding to optimism surrounding Pfizer and BioNTech data last week. The Dow Jones Industrial Average closed at a record high, and while most Asian benchmarks were little changed, energy and financial stocks pushed higher. Futures in this region are trimming yesterday's rise, however. The dollar edged lower amid a prediction that the U.S. currency could begin a 20% plunge in 2021, should the treatments become widely distributed. For the drugmakers themselves, BioNTech's boss is keen to emphasize that producers aren’t competitors. Here’s what we know about the two products.

Vaccines may well be on the horizon, but new restrictions keep on coming. German Chancellor Angela Merkel urged people to limit public and private gatherings, and she had proposed requiring face masks for all school students but failed to push through a range of new measures. Sweden, one of the few countries to avoid a coronavirus lockdown earlier this year, resorted to its toughest restrictions yet after an influx of people filling intensive care beds. “Don’t go to gyms, don’t go to libraries. Don’t host dinners, don’t host parties. Cancel,” Prime Minister Stefan Lofven said. Amid a largely voluntary strategy thus far, Sweden's economy has fared better than most. In Italy, a surge in hospitalizations below intensive care level has caught officials off guard. Over in the U.S., California on Monday reinstituted bans on many indoor businesses, while Michigan has ordered a three-week partial shutdown.

It's been a long time coming, but Tesla Inc. was finally named to one of the world’s most famous stock indexes in an action that will greatly broaden its investor base. The firm will enter the S&P 500 on Dec. 21 following months of speculation that has helped drive a nearly fivefold rally in the stock this year, making the electric vehicle pioneer the biggest company ever to be added to the gauge. While entry into the benchmark may dim some of Tesla’s cult stock appeal, membership comes with benefits, including forced purchases by index-tracking investors and funds. Tesla shares rose as much as 15% in extended New York trading on the news.

Oil bulls got another boost as a technical panel that advises ministers suggested the OPEC+ oil alliance should consider delaying its planned output boost by between three and six months. The coalition — led by Saudi Arabia and Russia — is scheduled to increase crude production by almost 2 million barrels a day in January, having initially anticipated that a global economic recovery would rekindle fuel demand. Futures in New York added 0.7% on Tuesday after rallying 3% on Monday amid the vaccine joy.

U.S. stocks may have closed at an all-time high on Monday but under the surface their rally is showing signs of exhaustion against peers. Since reaching a relative peak at the beginning of September, the S&P 500 Index has lagged the MSCI World ex-U.S. Index by more than 4 percentage points. Vaccine optimism — which has kickstarted a rotation toward global stocks and sectors that have been hardest hit by the pandemic — has taken the shine off once market-leading U.S. shares. A look at the size of the value stock cohort in each market continues to favor international shares over their U.S. rivals, according to data compiled by Bloomberg from MSCI Inc. indexes. The market capitalization of cheaper shares is over 50% of the MSCI Europe Index and about 48% of the MSCI Japan. They make up just 46% of the U.S. benchmark. If the global vaccine value rally has legs, look for U.S. shares to continue to lag. 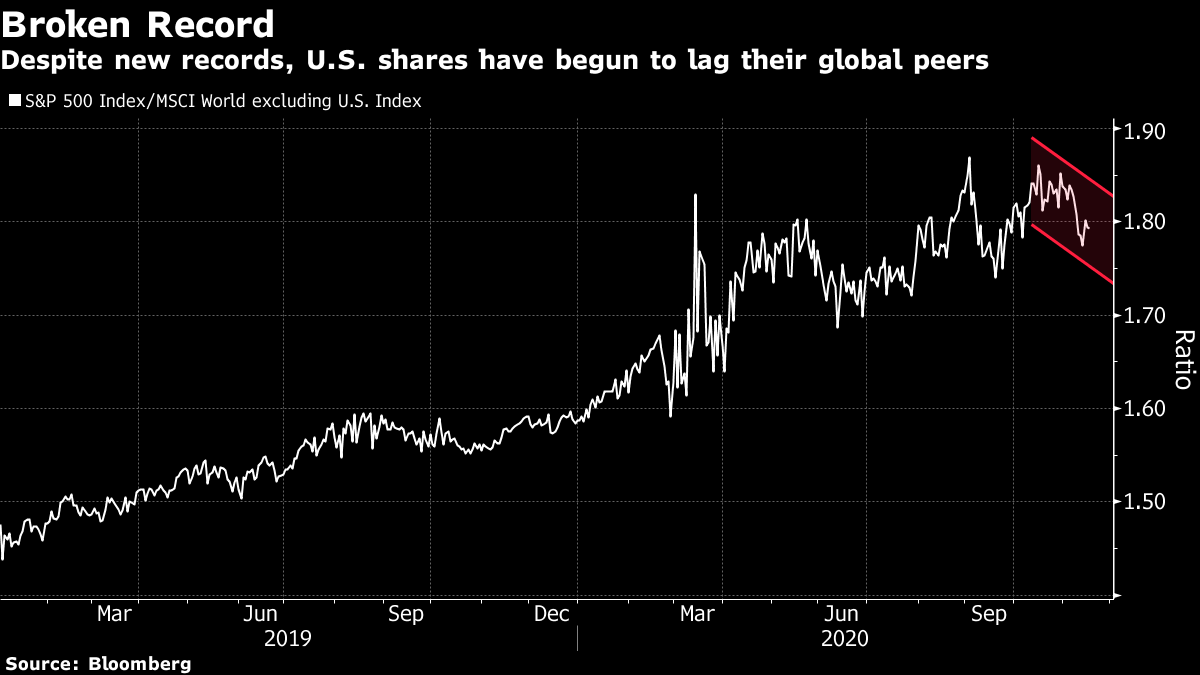 Protected: OP: The Boys With the Better Seats Rule

Midday Report: How you could lose everything by short selling stocks — whether you’re betting against GameStop or Tesla