Memories of 2017 are flooding back as Bitcoin's charge continues. The digital asset added another 15% to rise above $18,000 this week before dipping below that level again this morning. It's more than doubled in value this year amid a fresh embrace from some Wall Street firms and many watchers are setting their sights on the record high of almost $20,000. Even the legendary billionaire hedge funder Ray Dalio thinks he might be missing something.

U.S. and European futures edge lower while Asian stock markets were mostly steady. In Washington, Democrats asked Mitch McConnell to resume talks on stimulus, though the Senate majority leader stuck to his insistence on a targeted package. Meanwhile, monetary policy-makers are having their say on vaccine developments, with European Central Bank President Christine Lagarde commenting that she's “not sure that it’s going to be a major game changer for our forecasts,” and Federal Reserve Chair Jerome Powell cautioning that the U.S. economy still has a “long way to go.” Bank of America Corp. strategists, meanwhile, reckon it’s time to start selling risk assets.

Goldman Sachs is preparing to trim its workforce for the second time in just three months, as a hold on firings during the pandemic gives way to a push to improve efficiency. This round isn’t expected to exceed the roughly 400 positions the bank began eliminating in September, according to people with knowledge of the matter. But executives anticipate going deeper in the coming year, in what could eventually amount to one of the most significant staff reductions at the bank.

Outgoing U.S. president Donald Trump ordered the Pentagon to accelerate a drawdown of U.S. troops in Afghanistan and Iraq as he works to deliver on a longtime pledge to exit from “endless wars” before he leaves office in January. Reports on the proposal drew bipartisan criticism from lawmakers including Mitch McConnell, who is usually a staunch Trump ally. Separately, Trump also announced he had fired a top cybersecurity official who has publicly contradicted his unfounded claims about widespread election fraud.

Reports Tuesday said the U.K. and European Union could strike a deal on their future relationship early next week. Elsewhere, Halfords reports results as more and more Londoners turn to cycling during the pandemic, while A.P. Moller-Maersk raised its guidance as the world’s biggest container shipping company enjoys stronger demand than feared. U.S. housing starts is on a light data schedule.

After all the euphoria of having not just one but two incredibly effective vaccines in the pipeline, and little to suggest Joe Biden won't take the reins at the White House in January, the U.S. stock rally is starting to look a little tired. About 90% of S&P 500 members are trading above their 200-day moving average and the benchmark itself is trading two standard deviations above its 50-day average — both signs of an over-extended market move. While it's easy to make a bullish case for stocks when the first vaccine trucks start to roll out next year, it's less clear when that might be. It's also sadly inevitable that many countries are going to suffer badly from rising infections until that happens thanks to the resurgent virus, and lockdown measures to contain the spread are mounting. Traders are now bracing to see the impact of the latest restrictions in upcoming economic data. And as discussed before, a growth-to-value rotation could end up weighing on the level overall benchmarks, or at least not give them the same oomph that investors got used to when megacap tech stocks were leading them higher. It seems a good time for the rally in U.S. shares to take a pause. 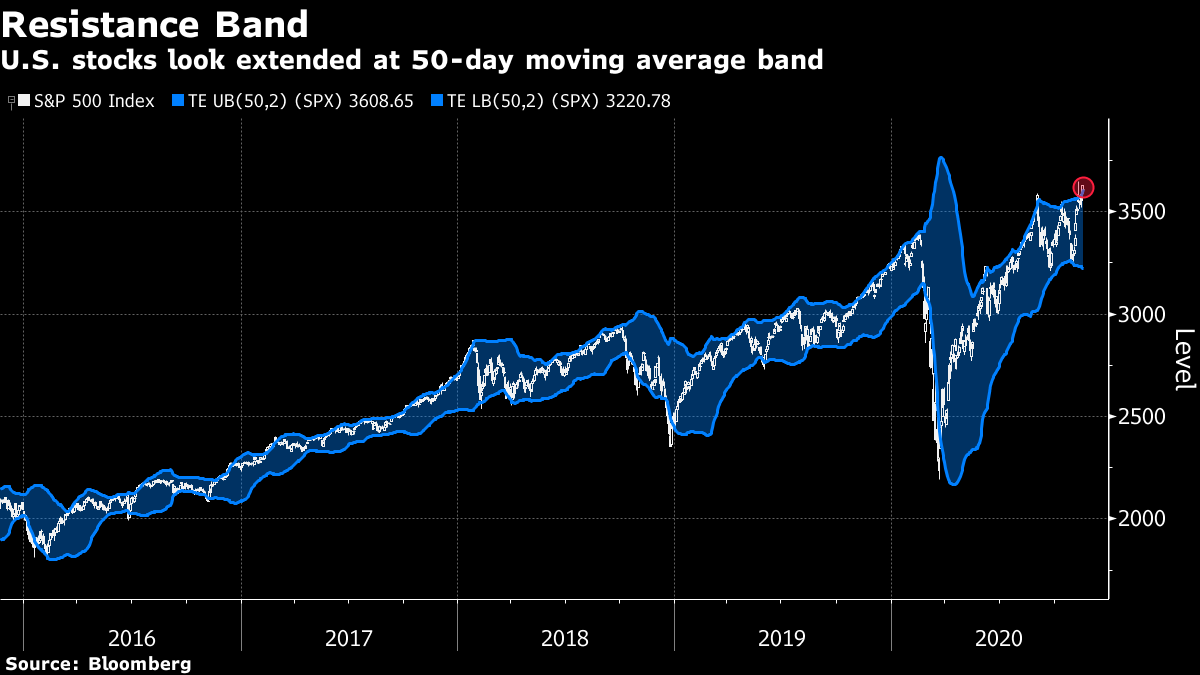