Pfizer results pave the way for vaccine authorization. Trump is running out of time. Joyy is a "fraud tech firm," according to Muddy Waters Research.

Pfizer says its vaccine is 95% effective, paving the way for the company to apply this week for the first U.S. regulatory authorization for a coronavirus shot. The U.S. drugmaker and partner BioNTech SE said their vaccine protected people of all ages and ethnicities, with no significant safety problems so far in a trial that included almost 44,000 participants. Pfizer shares were up 2% at 11:25 a.m. in New York, with BioNTech American depositary receipts gaining 5.3%. Moderna’s rival shot appears equally effective, and a third contender, from AstraZeneca and the University of Oxford, is expected to release trial results soon.

Asian stocks look set to come under pressure after U.S. shares closed at their lows as restrictions to curb the coronavirus spread overshadowed progress toward a vaccine. The dollar held near its lowest in two years. Futures slipped in Japan and Australia. The S&P 500 Index closed at its session low after New York City shut schools because of rising infections. The Bloomberg Dollar Spot Index earlier fell to the lowest since April 2018 as vaccine optimism lifted commodity prices and resource-linked currencies. Benchmark Treasury yields ticked higher. Oil edged higher.

How CleanTech is Helping Power a Greener Economy

Companies devoted to clean technologies – or ‘CleanTech’ – like those involved in renewable energy production, energy storage, energy efficiency, and pollution reduction represent an emerging area of technological innovation. We recently explored how CleanTech is accelerating the transition to renewable energy – and why investors might want to take notice.

President Donald Trump's gambit to overturn states' election results is running out of time, bringing Joe Biden closer to formally claiming the White House as states push ahead with certifying election results. Although Trump’s campaign and his supporters have mounted legal challenges, Georgia is on track to certify its election results on Friday, with Michigan, Pennsylvania and Nevada expected to follow next week, Arizona by Nov. 30 and Wisconsin by Dec. 1. Unless courts intervene, validation by those states would make it difficult for Trump to continue to claim that he, and not Biden, won the presidential election.

One of China’s largest asset managers wants to almost double the foreign cash it oversees, as the nation’s economic rise and financial opening increases demand. China Asset Management Co. will seek to grow such assets to at least $10 billion over the next few years, up from about $6 billion, said Richard Pan, head of Global Capital Investment at the Beijing-based firm. Its assets under a program that allows foreigners to invest in China have already risen from $1 billion in 2013. Offshore holdings of Chinese bonds and equities reached all time highs this year after regulators scrapped quotas limiting inflows. China, meanwhile, is in no rush to rein in their strongest yuan in more than two years with booming exports.

Whatever you think of the outcome of the recent U.S. election, it's clear that the race between President Donald Trump and challenger Joe Biden was closer than many had expected. So why did Trump get more than 70 million votes, according to the official count? Setting aside the bifurcation of U.S. media, which almost certainly played a role, there's a simple answer: Some of Trump's policies appealed. Richard Koo over at Nomura argues that Trump's stance on trade, in particular, might have been well-suited to a globalized economy that's changed the investment equation for U.S. companies so that many of them "find their capital earns higher returns when invested in emerging markets than when invested at home." 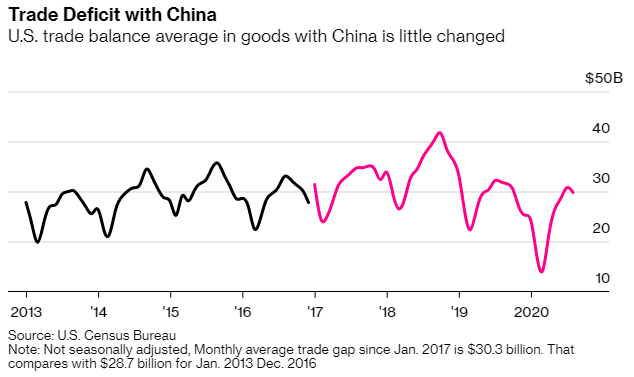 The argument here is that businesses will find the easiest way to produce profits is by investing in emerging markets where labor costs are cheaper. This is what Koo dubs a "pursued economy." While he says Biden "seems unaware" that the U.S. could be characterized as an example of this category, I'd argue something different. There's nothing like a narrower-than-expected electoral victory to focus a politician's mind on the opposition candidate's appeal. Biden will understand why Trump's trade policies resonated with many Americans, and that's one reason why trade tensions with China probably won't be going away anytime soon.