The G20 and IMF warn the recovery is at significant risk. China pressures more overseas dissents. Biden rips into Trump over the transition logjam.

The IMF and the Group of 20 warned that the recovery from this year’s recession is at risk and could be derailed as the resurgence of Covid-19 forces fresh restrictions on households and companies. The IMF noted progress on a vaccine, but also said elevated asset prices point to a disconnect from the real economy and a potential threat to financial stability. “The recovery is uneven, highly uncertain and subject to elevated downside risks, including those arising from renewed virus outbreaks in some economies,” the G-20 said, ahead of a virtual summit this weekend hosted by Saudi Arabia. Among the worst- affected major economies is India, according to Oxford Economics. Meanwhile, even outdoor exercise is banned in one of the world's toughest lockdowns in Australia.

How CleanTech is Helping Power a Greener Economy

Companies devoted to clean technologies – or ‘CleanTech’ – like those involved in renewable energy production, energy storage, energy efficiency, and pollution reduction represent an emerging area of technological innovation. We recently explored how CleanTech is accelerating the transition to renewable energy – and why investors might want to take notice.

President-elect Joe Biden assailed the Trump administration’s lack of cooperation on the presidential transition, which he says hinders his team’s ability to get up-to-date information on the coronavirus pandemic. "It’s just outrageous what he’s doing,” Biden said, referring to Trump’s legal maneuvers to overturn the election result. Separately, Biden said Thursday he has chosen a Treasury secretary, promising an announcement either next week or the week after. Names he is said to have been considering include current Federal Reserve governor Lael Brainard, former Fed governor Roger Ferguson, and former Fed Chair Janet Yellen.

A vocal advocate of Chinese government reform living in the U.S. said that several banks have frozen his accounts back home, in another sign that Beijing is stepping up pressure on overseas dissidents. The action has kept Deng Yuwen, a former editor at the Communist Party-run Study Times journal, from accessing about 300,000 yuan ($46,000), a sum he described as his life savings. In September, China jailed outspoken property tycoon Ren Zhiqiang for 18 years on graft charges, months after he was linked to an article criticizing Xi’s handling of the coronavirus outbreak. And earlier this week, a Beijing-backed newspaper in Hong Kong reported that China was preparing a global watch list of people who had advocated independence for Taiwan.

Elon Musk has mocked the idea of using hydrogen fuel cells to power next generation green vehicles (“Fuel cells = fool sells”), but China is promoting it. Beijing's offering to reward cities that achieve adoption targets in a 15-year plan for new-energy vehicles. Targets for 1 million fuel-cell vehicles in operation by 2030 are in place, according to an energy savings vehicle development plan. “Hydrogen is expected to play a much more important role to drastically decrease the country’s greenhouse gas emissions,” wrote French think tank Ifri's Kevin Jianjun Tu.

What do a top chipmaker, a car manufacturer and a coal company have in common? Defaults from this trio of state-owned companies have sent jitters through China's credit market in recent weeks. The big question when it comes to SOE defaults is whether they are happening with the blessing of Beijing as authorities try to reform the bond market and encourage credit differentiation, or whether they're happening outside of the capital's control as local government budgets simply become over-stretched and debt burdens impossible to maintain. 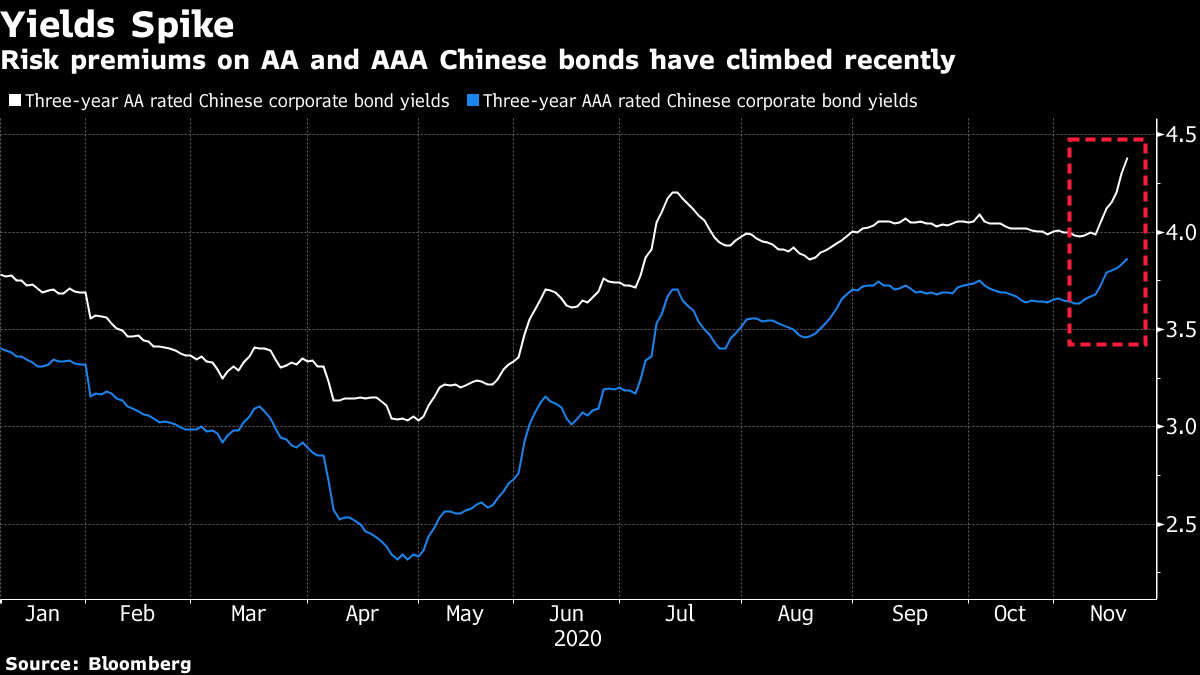 Signaling from Beijing is incredibly important in answering the question. One thing worth watching is the reaction of local credit rating agencies. Many Chinese agencies have strong state connections and a history of seeming to do Beijing's bidding by keeping credit ratings high on strategically important businesses. (A Bank for International Settlements paper, for instance, found back in 2017 that local Chinese agencies tend to rate companies an average six to seven notches higher than international credit agencies like Moody's or Standard & Poor's.)

If Beijing wanted to show that recent SOE defaults are happening in a controlled manner — deflating a massive debt balloon slowly rather than letting it pop suddenly — then having credit rating agencies signal this to the market through changes in their bond designations would certainly be one way of doing it. So far there's not much sign of that happening. Chinese rating agencies have been upgrading a record number of local government financing vehicles in the midst of the coronavirus crisis, and one agency issued a triple-A rating on that previously mentioned coal company just a few weeks before its default.