Another vaccine breakthrough, pressure grows on Trump to concede, and it's PMI day.

A vaccine developed by the University of Oxford and AstraZeneca Plc stopped an average of 70% of participants in a large trial falling ill. While the efficacy falls short of the headline numbers from Pfizer Inc. and Moderna Inc., early analysis of the results showed 90% effectiveness can be achieved through altering the dosing regime. The vaccine will be far cheaper than the others previously announced and can be stored in an ordinary fridge. The U.S. plans to start using the Pfizer vaccine by mid-December as the number of cases, hospitalizations and deaths continue to rise rapidly.

Pressure is growing from Republicans on President Donald Trump to concede defeat in the election, or at least allow the transition process to begin. With states including Michigan and Pennsylvania preparing to certify their election results as soon as today, his court challenges failing to make ground, and even his legal team splitting, Trump's avenues for overturning the election are rapidly closing. President-elect Joe Biden intends to name longtime advisor Antony Blinken as secretary of state, according to people familiar with the matter as he continues to prepare for the presidency.

Renewed lockdowns have pushed the euro area into another contraction, with IHS Markit’s composite Purchasing Managers’ Index falling to 45.1 in November from 50 the previous month. A strong performance from the manufacturing sector helped Germany hold on to an expansion in the month, while both France and the U.K. saw output shrink. The U.S. is expected to show continued growth when PMIs for the economy are published at 9:45 a.m. Eastern Time.

The AstraZeneca vaccine announcement added to the risk-on mood which is pushing equities to new records and the dollar to a 2018 low. Overnight the MSCI Asia Pacific ex-Japan Index added 0.8%, with South Korea's Kospi index hitting an all-time high. In Europe, the Stoxx 600 Index had gained 0.4% by 5:50 a.m. with energy and bank stocks the best performers. S&P 500 futures pointed to a higher open, the 10-year Treasury yield was at 0.854%, oil traded above $43 a barrel and gold slipped.

Fed Chairman Jay Powell and Treasury Secretary Steven Mnuchin have been depicted this year as the duo to save the world. However their parternship seemed to hit the rocks last week after Mnuchin requested that the Fed "return" billions in relief funds that it hadn't used to the Treasury. Ostensibly, Mnuchin would like to see that money redeployed as direct fiscal stimulus, rather than see it used as part of a lending program. 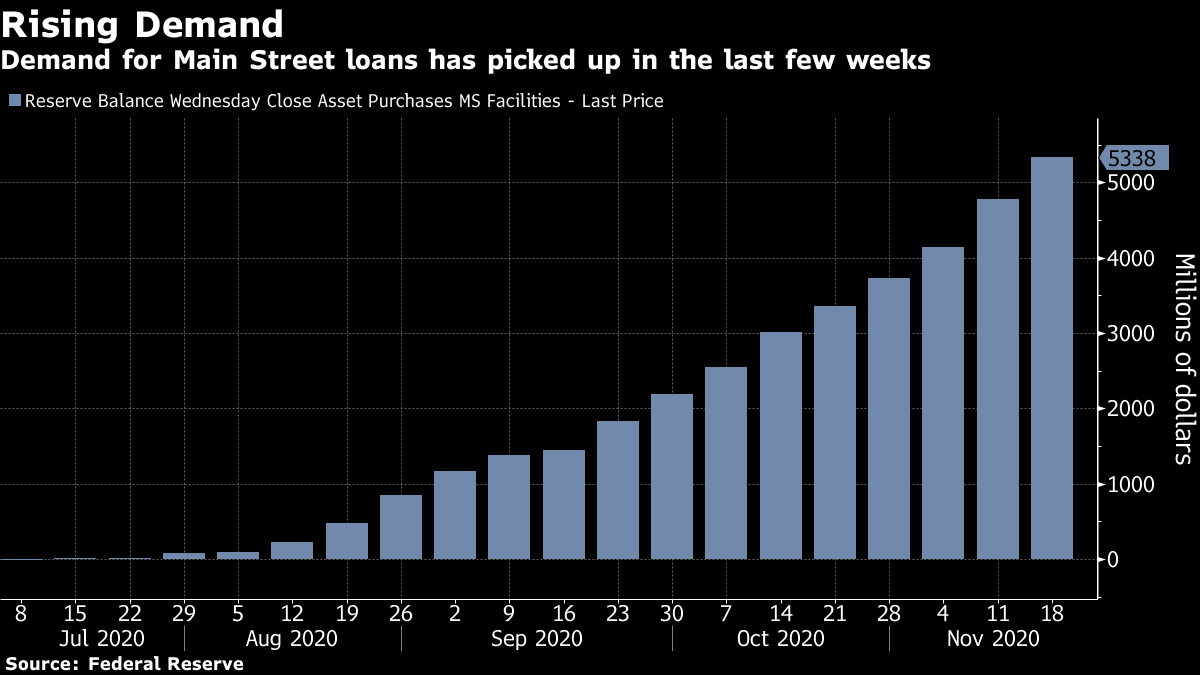 The whole discussion, however, is riven with weird accounting and imprecise language. For one thing, the idea of the Fed giving back money is weird. It's not like there's some pile of cash somewhere at the Fed or even the Treasury that gets wheeled from one building to the other. All that exists is a certain legal authority granted to the Fed to lend out a certain amount, which the Fed has now relinquished. And by relinquishing that authority, the Treasury doesn't suddenly have hundreds of billions of dollars that it can now "re-allocate" as it fits. If Mnuchin wants to get one more round of PPP money out the door, that has to be voted on by Congress in the form of another stimulus bill. But this was just as true prior to his request to the Fed as it is after.

The Fed supposedly giving back the money doesn't change the fact that the constraint on new spending was always political and it always will be. Some accounting tweaks that say the Fed has less ability to lend now than it did before don't strike at the real issue. Either McConnell, Pelosi and Trump/Mnuchin can agree on a new deal or they can't. That's it.

Now in theory, there could be some senators who were reluctant about voting for a new stimulus but now are under the impression that a few hundred unspent billions of dollars just showed up at the door, burning a hole in the administration's pocket or something like that. And so perhaps a move like this greases the skids a little in terms of getting something passed. And if so, maybe that's fine. But fundamentally the discussion is still based on misconceptions that there's some fixed amount of money out there for politicians to redeploy, as if the amount of money was the issue at hand, rather than the political will itself.