It's three weeks since the election and President-elect Joe Biden has finally gained access to government agencies and officials after the General Services Administration acknowledged him as the apparent winner of the vote. The move from the GSA came after Michigan certified Biden as the winner, President Donald Trump suffered fresh legal setbacks and pressure grew from Republican senators to get the process under way. The big news from the Biden camp yesterday was the selection of former Fed Chair Janet Yellen as Treasury secretary, a move seen as signaling he plans to go big on stimulus.

The World Health Organization’s chief scientist said that people will need to take precautions for the next year as countries need time to vaccinate their populations. The global travel industry meanwhile is pushing for so-called Covid passports that would allow travelers to demonstrate their virus-free status. The U.K. is moving to end its current lockdown at the start of December while Greater Los Angeles reintroduces additional measures from tomorrow night as cases surge. Bloomberg has launched its Covid Resilience Ranking showing the best and worst places to be in the pandemic era.

The rapid rise of Bitcoin continued this morning, passing $19,000 for the first time since 2017. The rally has been accompanied by the usual collection of further price rises, with Tom Fitzpatrick, a strategist at Citigroup Inc., saying earlier this month the token could potentially reach as high as $318,000. There's less good news for lovers of more traditional economic-curmudgeon plays with gold dropping for a second day to trade at $1,815 an ounce by 5:50 a.m. Eastern Time.

Stock investors are welcoming the start of the transition and news that Yellen will head the Treasury Department. Overnight the MSCI Asia Pacific Index added 1% while Japan's Topix index closed 2% higher. In Europe the Stoxx 600 Index gained 0.5% by 5:50 a.m. with oil stocks by far the best performers. S&P 500 futures pointed to more green at the open, the 10-year Treasury yield was at 0.862% and oil was at $43.50 a barrel.

Stocks jumped yesterday afternoon once it was confirmed that President-elect Joe Biden planned to nominate former Fed Chair Janet Yellen to be Treasury Secretary. The Wall Street take on Yellen is that she's supremely qualified, extremely competent, a known quantity, of a generally dovish bent, and someone who will work well alongside the Fed, during a period where there's more focus than ever on fiscal-monetary coordination.

So here's three quick things to think about:

1. Her reputation as an uber-dove may be somewhat exaggerated. She started raising rates at the end of 2015 when the unemployment rate was over 5%. Since the unemployment rate dropped as low at 3.5% before the virus hit, and since we never really saw particularly rapid wage growth (let alone inflation) during this time, there's good reason to think that hike wasn't necessary, and that there was still considerable labor market slack. Same with the hikes throughout 2017. 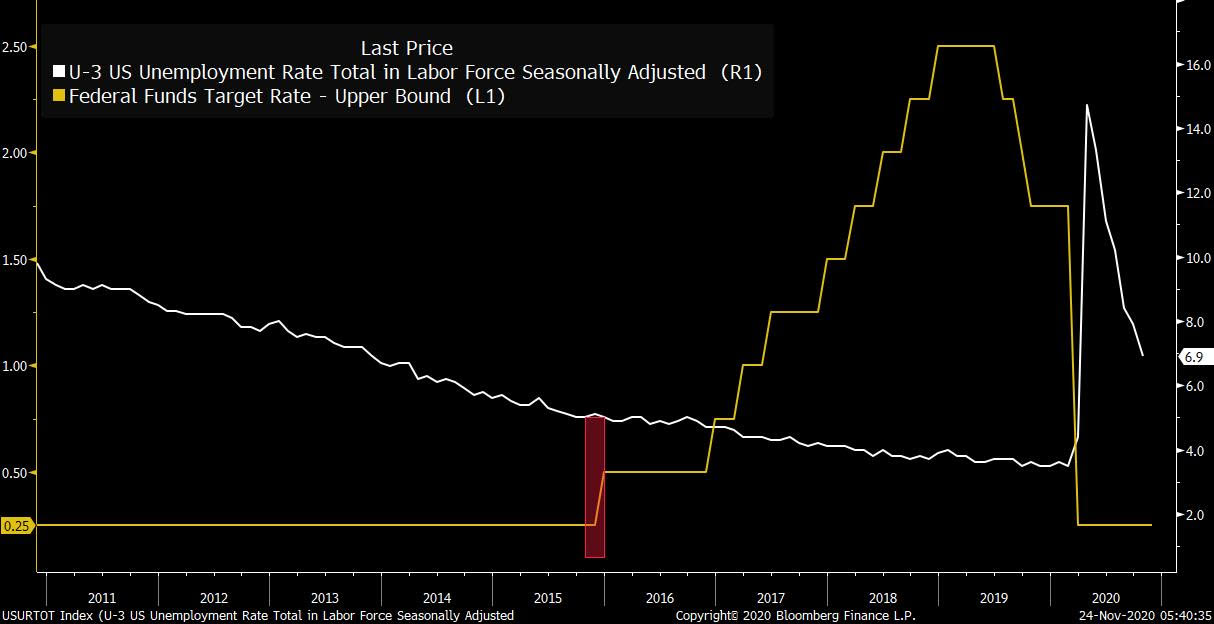 2. Furthermore the hawk/dove framework isn't so useful when talking about a Treasury Secretary. When we talk about hawks and doves on the FOMC, we're talking about how they weight employment and inflation within the dual mandate. The Fed is always turning a dial this way or that to get everything into balance. But the Treasury doesn't have an easy "tax and spend" dial to turn. If Yellen wanted to come in and help craft a mega stimulus that blows out the deficit, that'd be great, but the only thing that really matters is what can pass the Senate. And so then we're talking about what kind of deals she can strike with Mitch McConnell or — depending on what happens with the Georgia runoffs — the slimmest possible majority where Joe Manchin is the deciding vote. So thinking about how you get the best budget with that political reality is just a very different thing than weighing inflation and employment in the setting of monetary policy.

3. Olivier Blanchard tweeted that Yellen was a great appointment because this is a time where fiscal and monetary policy makers must work together. There's little reason to doubt that she and Powell will work very well together. And after last week's drama with Mnuchin asking for the return of unused Cares Act money, this is a topic high on people's minds. However, it's likely that fiscal-monetary coordination is an overrated issue here.

Protected: OP: Rainy Days and Mondays Always Get Me High