Tomorrow's Thanksgiving holiday in the U.S. means the Thursday slate of economic data has been moved up to today. Initial jobless claims at 8:30 a.m. Eastern Time are expected to come in at 730,000, slightly lower than last week, with continuing claims seen dropping to 6 million. The second reading of third-quarter GDP and durable goods orders are also at the time. Personal income and spending data, new home sales and core PCE – all for October — are at 10:00 a.m. At 2:00 p.m., the minutes from the Nov. 5 Federal Reserve meeting are published.

President-elect Joe Biden continues to name the senior officials who will join his incoming administration. While reaction to his Treasury pick, Janet Yellen, has been almost universally positive, Treasury Secretary Steven Mnuchin may have already handicapped her spending discretion by placing the $455 billion in unspent Cares Act funding recovered from the Federal Reserve in an account that lawmakers will control. There was some good news for both the current and incoming administrations with Democrat and Republican lawmakers reaching agreement on the annual spending bill needed to avoid a government shutdown on Dec. 11.

The Thanksgiving holiday travel period is likely to be very different this year as the pandemic continues to run almost uncontrolled across the U.S. Texas reported a record number of cases yesterday, while California's top health official warned that daily deaths from the virus could hit a new high by Christmas. Federal officials are working on reducing the required quarantine period for people who can show a negative test. In Europe, German Chancellor Angela Merkel is proposing further tightening of the country's restrictions while French President Emmanuel Macron said he will gradually lift a nationwide lockdown from Saturday.

After yesterday's record-setting session global equity markets are a little quieter this morning as investors wait for a raft of economic news. Overnight, the MSCI Asia Pacific Index was broadly unchanged while Japan's Topix index closed 0.2% higher. In Europe, the Stoxx 600 index had slipped 0.3% by 5:50 a.m. with banks among the worst performers. S&P 500 futures pointed to a small decline at the open, the 10-year Treasury yield was at 0.87%, oil's rally continued and gold held above $1,800 an ounce.

Euro-area banks underperformance today can be linked to a European Central Bank financial stability review published this morning that said that the region's lenders will probably have to set aside more money for bad-loan provisions. The central bank also echoed earlier warnings from both the Federal Reserve and the International Monetary Fund that a worsening of the pandemic could lead to a sudden drop in "stretched" valuations in some asset prices. The ECB did say that the risks to financial stability from Brexit are "mostly contained" after the European Commission allowed temporary access to critical derivatives clearing houses in London after Dec. 31.

Happy day before Thanksgiving! This can be an interesting time of year for markets and the economy. The immediate aftermath of Thanksgiving in 1999 saw the dotcom bubble kick into high gear. In 2017, of course, young people at the dinner table told their family all about cryptocurrencies, and then a bunch of coins went to the moon in the days and weeks thereafter. And it's not just markets stuff that sometimes makes the holiday memorable. Who can forget the oil crash over Thanksgiving in 2014. And of course Dubai World defaulted around Thanksgiving 2009.

This year's going to be a weird one, since fewer people will be gathering in big groups due to the virus. But the wild action is already here, with stocks soaring to record highs, electric vehicle names of all stripes surging, cryptocurrencies booming and so forth. With the election in the rear-view mirror, and a vaccine on the horizon, animal spirits are running crazy high. 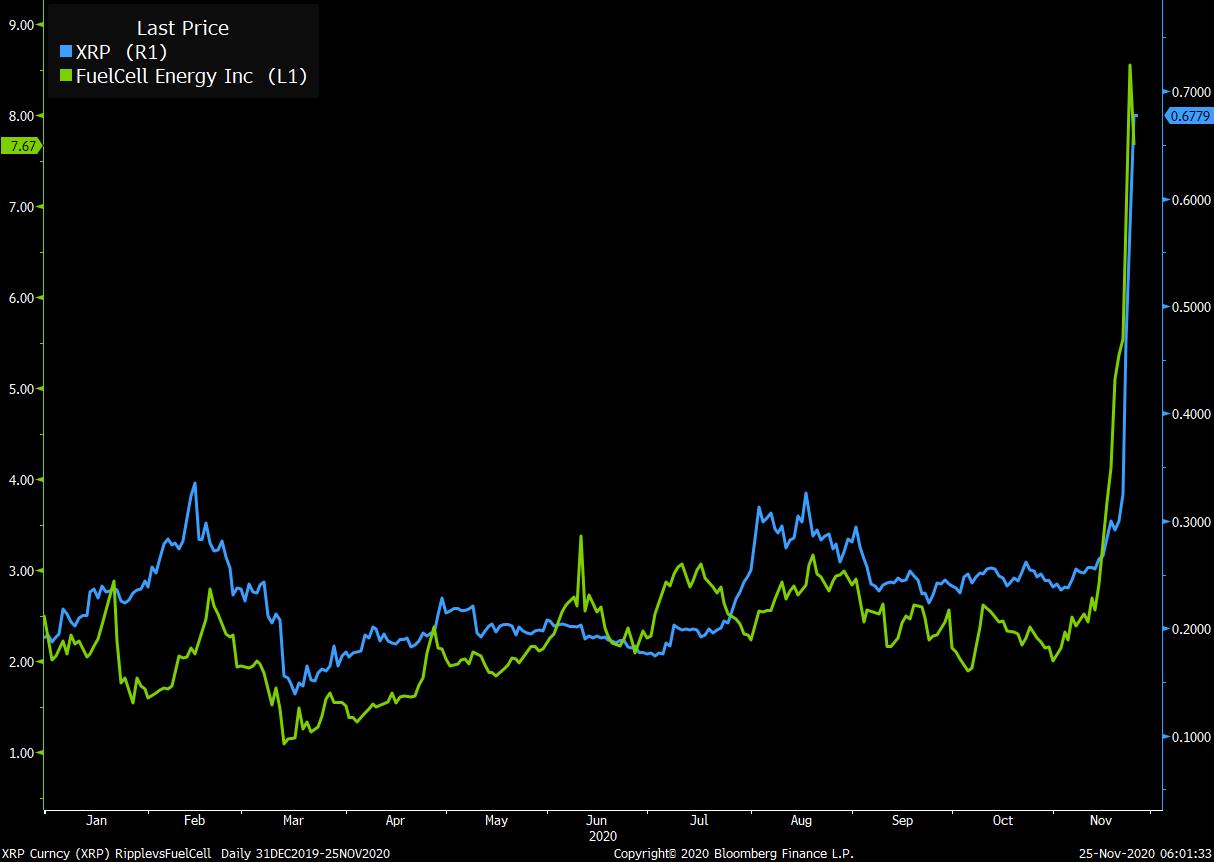 How high though? Well, the above is a fun chart that says it all IMO. The green line is the chart of FuelCell Energy Inc., a clean energy company that's been publicly traded for literally almost 30 years, and which tends to surge whenever people get excited about electric vehicles or green tech. The blue line is the cryptocurrency Ripple or XRP, which has also been around for a long time now, and has a low nominal unit price, so people think it's "cheap." It also tends to rally whenever we experience a bout of cryptomania, only to be forgotten about when the hysteria subsides.

Anyway, you can see them side-by-side on this year-to-date chart. Up, down, up, down, and then BOOM — both take off like a rocketship at virtually identical moments in early November. It's real dash-for-trash hours out there, and whether we're talking about cryptos or listed companies, these last couple of weeks it all went wild.