AstraZeneca is likely to conduct an additional global trial to assess the efficacy of its Covid-19 vaccine, according to the company’s chief executive officer, after current studies raised questions over its level of protection. The new trial would evaluate a lower dosage that performed better than a full amount in Astra’s studies and would be used to confirm whether or not the higher 90% efficacy rate stands. Meanwhile, Swedish confidence in the nation’s decision not to lock down has slumped, with concerns over capacity in the health-care system now almost universal.

Asian equities were poised for a cautious end to the week as a global stock rally lost steam. Oil retreated amid rising tensions with OPEC+ members. Futures slipped in Japan, Hong Kong and Australia, indicating the MSCI Asia Pacific Index will claw back some of this month’s 12% surge. Earlier, the spreading pandemic tempered gains in European stocks, while U.S. markets were closed.

Rising incomes, expanding smartphone access, and population growth are among the factors powering internet and e-commerce adoption in emerging markets. Explore our long-term outlook and the types of companies positioned to benefit.

Ray Dalio, the billionaire founder of Bridgewater Associates, is opening a family office in Singapore to run his investments and philanthropy throughout the region. Dalio is the latest uber-wealthy business leader to open a family office in Singapore: Vacuum cleaner tycoon James Dyson’s Weybourne Group ramped up hiring in 2019 while Shu Ping, one of the billionaires behind Haidilao International — the world’s biggest chain of Chinese hotpot restaurants — opened Sunrise Capital Management there last year. In more Singapore news, the city just recorded its first local case of Covid after nearly two weeks.

Bitcoin plunged on Thursday in a sell-off that saw other digital assets fall more than 20%, a slide likely to stoke speculation about the durability of the latest boom in cryptocurrencies. The largest token fell as much as 14% in Thursday trading, heading for one of its worst days since the pandemic-spurred liquidation in March. The rout began just hours after Bitcoin rose to within $7 of its record high of $19,511, the culmination of a more than 250% surge in past nine months. Fears over tighter crypto regulation and profit-taking after a frenetic rally were among the reasons cited for the sudden drop. Here's the lingo you need to know to understand all things crypto.

Concern about the depth of India’s recession is slowly being replaced by optimism over a recovery. A slew of indicators from car sales to services sector activity notched higher last month, while alternative data signal robust demand in an economy that’s primarily driven by domestic consumption. Data due Friday will likely show GDP declined 8.2% in the three months through September. While that pushes Asia’s third-largest economy into its first technical recession in records going back to 1996, it’s a sharp recovery from the record 24% contraction the previous quarter. But not all Indians are feeling it: Almost 300,000 farmers are on their way to India’s capital to protest against new agricultural laws they say will severely hurt their incomes.

This November will be one for the record books. Global stocks have had their best month ever, using data back to 1988 — the MSCI gauge of world shares is up 13%.

Usually a lull in trading volume around Thanksgiving makes for a less exciting period, but not this year. Take the Nasdaq Composite. Volume averaged 1.07 billion shares per day through Wednesday, making it the biggest lead up to Thanksgiving since 2004 and almost double the volume of last year, according to data compiled by my colleagues Divya Balji and Brandon Kochkodin. 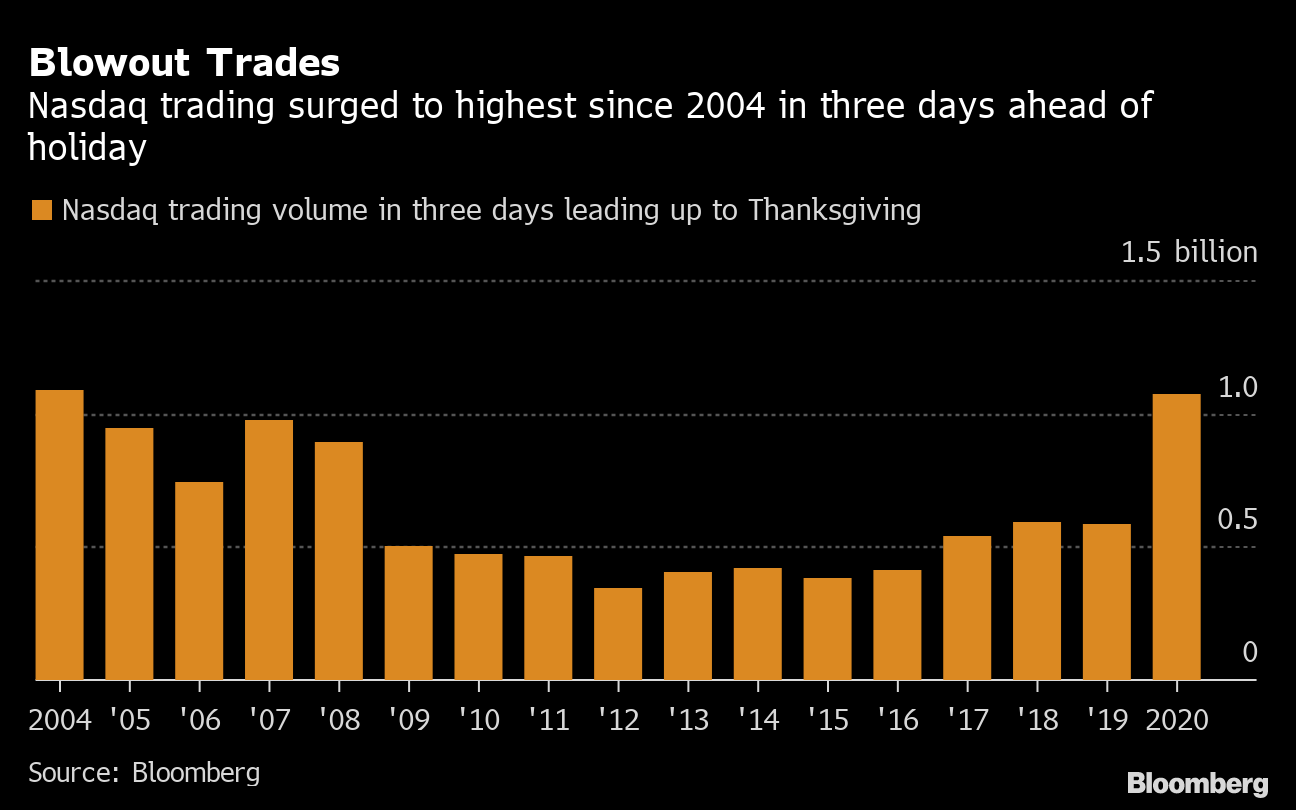 With portfolio rebalancing heading into year-end taking on a potentially significant role due to 2020's strong equity gains, it will worth keeping a close eye on whether trading volumes remain elevated before Christmas.