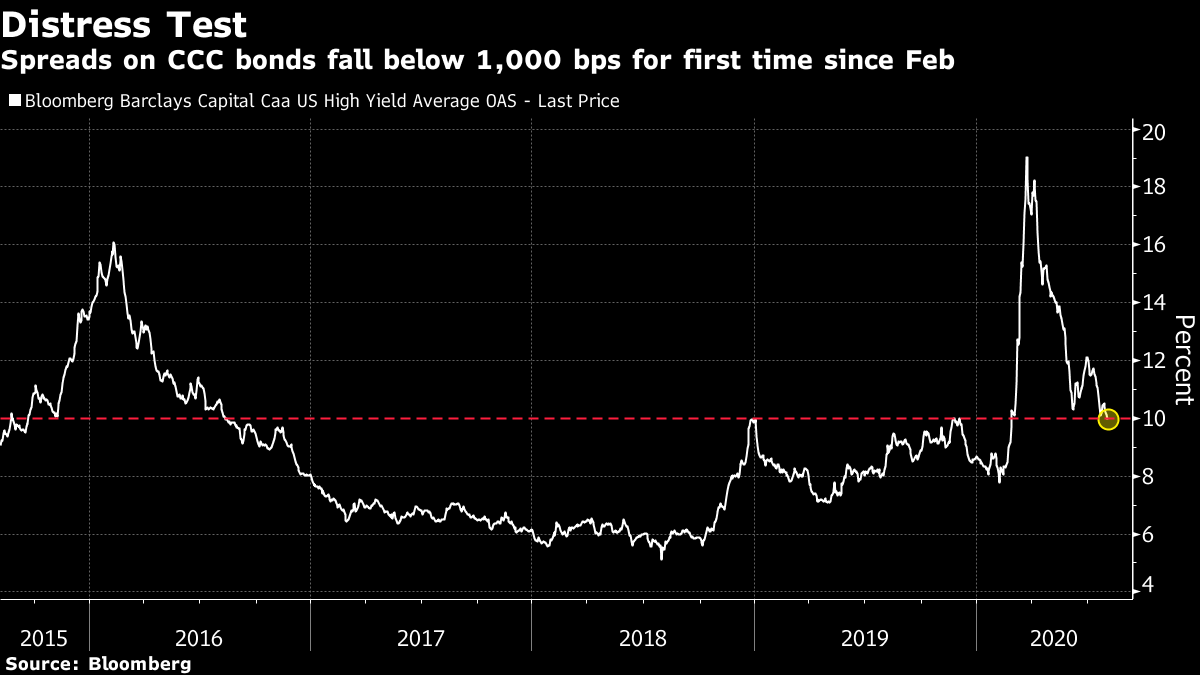 Britain’s government signed deals for fast Covid-19 tests, aiming to provide tests with a 90-minute turnaround to hospitals and care homes in time for an expected winter resurgence of cases. The U.K. has already secured the highest number of potential vaccine doses per capita, ahead of the U.S., having signed a deal with GlaxoSmithKline Plc and Sanofi for as many as 60 million doses. Meanwhile, Kosovo’s Prime Minister was the latest European leader to self-isolate after contracting the disease, while outbreak statistics elsewhere may be understating the gravity of the situation. Covid-linked deaths in Iran may be triple the official tally, the BBC reported, while experts warn that India hasn’t properly recorded fatalities.

Merger Monday came roaring back this week, with a spate of acquisitions from health care to consumer hitting the tape.The flow of deals started over the weekend, when Siemens Healthineers AG clinched a $16 billion takeover of Varian Medical Systems Inc., gaining technology used for cancer treatment in the year’s biggest health-care deal. There was also a smattering of technology deals, with Google agreeing to invest $450 million in home-security provider ADT Inc. At least $39.6 billion of transactions were announced between Sunday and Monday, marking the fastest start to a week since before the pandemic, according to data compiled by Bloomberg.

The Nasdaq 100 touched a record as traders sought out names poised to do best in a stay-at-home economy. Apple Inc. reached an all-time high and Microsoft Corp. gained as it tried to salvage a deal for the U.S. operations of TikTok. Given the near-term overvaluation for the Nasdaq, its next 10% move is likely to be lower, reckons Ben Emons at Medley Global Advisors. Since the index bottomed in March the top 10 stocks have been small caps with no or negative free cash flow, and often with a business model which is focused on a single, but risky idea. These companies are up on average 1,000% since the lows of the Nasdaq, notes Emons. In comparison the Nasdaq index is up around 64% from the March low. Tech stocks in Europe’s Stoxx 600, meanwhile, are up 8% this year, the strongest performance of any sector but far short of U.S. peers.

President Donald Trump repeatedly insisted on Monday that any sale of TikTok’s U.S. operations would have to include a substantial payment to the U.S. — but it wasn’t clear under what authority he can extract a payout.
It would be unprecedented, based on recent history, for the U.S. government to collect a cut of a transaction involving companies in which it doesn’t hold a stake. Trump said the money would come from China or an American buyer such as Microsoft Corp. “The United States should get a very large percentage of that price, because we’re making it possible,” Trump told reporters at a news conference Monday evening.

Away from the almost existential debate about the sustainability of the global equity rally, risk appetite remains almost unquestioned in the U.S. corporate debt market. The lowest-rated U.S. junk bonds have pushed past a commonly-watched indicator signaling they are in “distressed” territory for the first time since the pandemic. As noted by my colleague Max Reyes, the average spread over Treasuries for bonds in the Bloomberg Barclays CCC index fell beneath 1,000 basis points Monday. Meanwhile, David Wilson has pointed out that the yield on the Bloomberg Barclays U.S. Corporate Bond Index has fallen to match the dividend yield on the S&P 500 for the first time since at least the 1970s. But under the hood, things are not quite as rosy. Part of the recovery in junk spreads may be down to the removal of debt from companies that have already defaulted. And the number of firms at risk of losing their investment grade status has risen to a record high, according to Moody’s. The U.S. corporate bond market is in rude health — thanks of course to the Federal Reserve — but that doesn’t mean the same can be said for U.S. corporates.