Germany's Angela Merkel is setting the groundwork for a showdown with two eastern European Union countries that have threatened to veto a $2.2 trillion spending package in a dispute over democratic standards. Hungary and Poland are headed for the gravest clash with their peers since they joined the EU in 2004, after reiterating on Monday they won’t agree to tying disbursements from the bloc’s budget and virus-recovery fund to upholding the rule of law. A unanimous approval by all 27 EU governments is needed for allowing the bloc’s executive arm to raise debt in capital markets to finance the package.

U.S. biotech company Moderna closed more than 20% higher on Monday, after seeking U.S. clearance for its Covid vaccine and unveiling an analysis of 196 cases that found the shot was 94.1% effective. As the world awaits inoculation, Britain's Boris Johnson is defending the tiered pandemic management system that is set to succeed England's lockdown this week, ahead of today's House of Commons vote where rebel Conservatives said they'd oppose the plan. Meanwhile, there are new signs the virus first started its global spread before researchers and public health officials were aware of it. U.S. health authorities found evidence of infection in blood donations collected by the American Red Cross in mid-December 2019 from residents in nine U.S. states, The Wall Street Journal reported.

After its November bull run suffered a one-week setback, Bitcoin soared to a new all-time high, surpassing its December 2017 peak. Last week's tumble, the biggest since March amid a 172% run-up this year, underscores the famous volatility of the asset class. The digital currency is a trading ground for a motley crew of retail players, speculative pros and exotic quants, while traditional investors have hitherto stayed on the sidelines. Yet, some big institutions, desperate for anything that might produce a return in current conditions, are beginning to dabble in it, Bloomberg's John Authers writes.

OPEC+ talks were delayed for two days to give ministers more time to reach a deal, after a long and tense meeting on oil production broke down without agreement. The delay, set out in a letter seen by Bloomberg, was the most dramatic sign yet of the deep division inside the cartel after hours of talks on Monday yielded no result. OPEC+ ministers will now meet on Thursday rather than today, to allow time for “further consultations.” Ministers are discussing whether to increase production in January as planned or maintain the cuts that have helped create a rally in oil prices. While some see the market as still too fragile to accept more barrels, others are keen to ramp up production and make the most of rising prices.

Euro Stoxx 50 futures are rising, though less than S&P 500 futures and Asian equity benchmarks. It's a quiet earnings morning aside from Swiss baker Aryzta. Economic data abounds, including Eurozone inflation, German unemployment, Swiss GDP and manufacturing Purchasing Managers' Index data for the Eurozone. U.K. house price data from Nationwide are expected to show a slow-down in recent gains. The OECD bloc of developed countries is expected to publish its latest economic outlook.

After the best month for global stocks on record, it seems the speculative froth is bubbling up in small-cap names, not the once market-leading bluechip megacaps. Total open interest in options on the Russell 2000 Index has pushed up to a near-six-month high in recent weeks, while an equivalent measure for the S&P 500 Index has stalled. Meanwhile, speculative net-long positions on the gauge of smaller companies has hit a nine-month high, according to the latest Commodity Futures Trading Commission data, while the equivalent for the S&P 500 has turned short for the first time since the beginning of September. The narrative is a straightforward one — small caps are deemed more exposed to a recovering economy — but again the enthusiasm isn't matched across other asset classes. It's a good sign for a rally when small caps are outperforming, but they don't have the power to drag the rest of the market higher on their own. 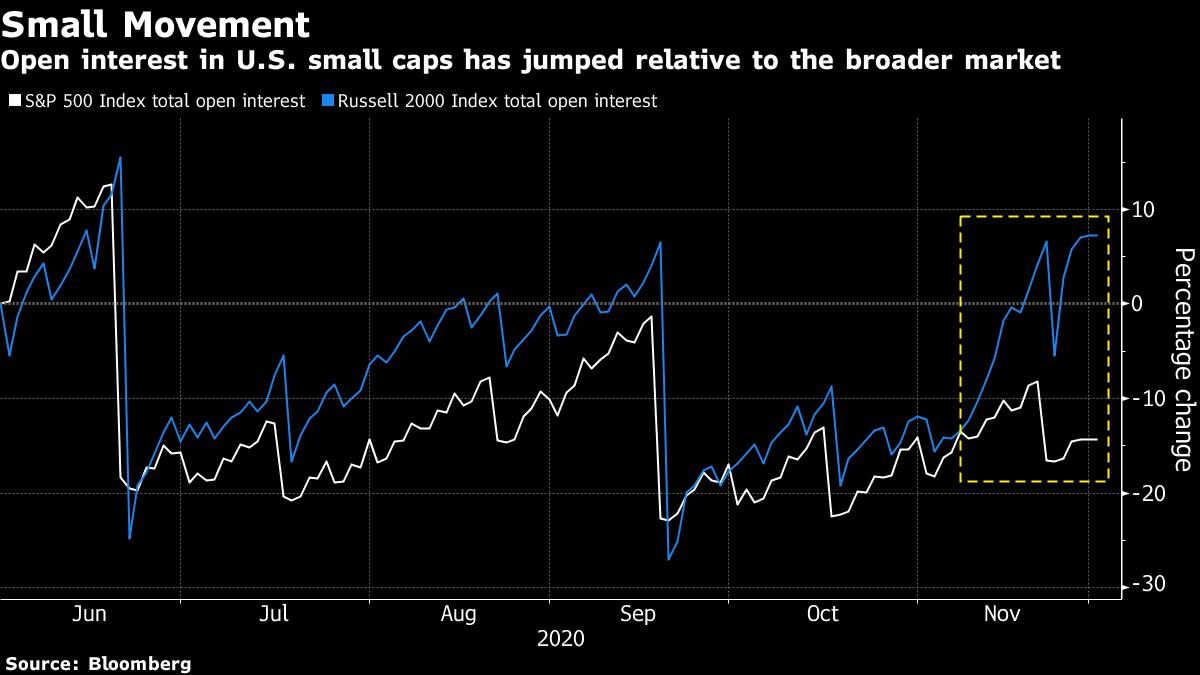