Chinese diplomats are playing to growing nationalistic sentiments. Hopes for a return to normal in Hong Kong are scuppered. And Australia’s stock exchange has become the world’s most unpopular bourse.

China’s diplomatic rhetoric is increasingly driven by concerns at home, where President Xi Jinping’s promise of national rejuvenation and a torrent of overseas criticism led by the Trump administration are fanning nationalistic sentiments. An example: When Australian Prime Minister Scott Morrison demanded Beijing apologize for a provocative tweet, the Chinese Foreign Ministry’s top spokeswoman shot back, asking whether Morrison lacks “a sense of right and wrong.” The response was a hit in China, drawing praise on social media. Diplomats have become celebrities on China’s internet and are widely known as “Wolf Warriors” in a nod to a “Rambo”-like action film series.

Asian stocks looked primed for gains after fresh record highs from their U.S. peers as a renewal of aid talks added to optimism over progress on coronavirus vaccines. The dollar extended its slide to a more than two-year low and Treasuries slumped. House Speaker Nancy Pelosi delivered a new proposal for a stimulus package and Senate Majority Leader Mitch McConnell said he is circulating among Republicans his own revised plan. Elsewhere, oil fell the most in two weeks on tensions between OPEC members and Bitcoin retreated after almost reaching $20,000 for the first time.

Categories Leading the Next Wave of E-commerce

This year has likely reshaped the trajectory for e-commerce. But despite impressive growth, adoption still lags in key categories and developing markets. Explore why we believe groceries, health care, and automobiles are among the opportunities that will take e-commerce to the next level.

A resurgence of the virus is scuppering hopes of a return to normalcy in Hong Kong. A key travel bubble with Singapore was delayed for a second time on Tuesday, some international banks ordered their staff to resume working from home and Carrie Lam, the city’s chief executive, said even parties on yachts are off limits. After a long lull with just a handful of cases a day, the deteriorating situation in Hong Kong prompted the government to impose tighter social-distancing rules and to close schools again.

The world’s factories are powering along, providing vital support for economies as renewed virus restrictions in some countries take a toll on growth. Indexes of manufacturing activity in the U.S., China and parts of Asia improved in November, and Germany saw solid expansion, according to reports on Tuesday. In South Korea, a bellwether for global trade, exports rose 4%, supported by surging demand for tech devices. The strength of trade activity in recent months is giving a lifeline to the recovery, though the situation remains fragile as the world awaits developments in the race to get a coronavirus vaccine.

Australia’s stock exchange has become the world’s most unpopular bourse among sell-side analysts after technical glitches prompted its longest-ever shutdown in over a decade. ASX Ltd. has zero buy ratings and 11 sells, giving it the lowest analyst consensus rating on both the S&P/ASX 200 Index and a Bloomberg Intelligence gauge of global security and commodity exchanges.

So Libor might live to fight another day, after administrator ICE said it's considering extending the retirement date for the much-maligned reference rate. Libor is still the benchmark to which trillions of dollars worth of financial assets are pegged, and it's proven difficult to transition this creaking financial architecture to something else. News of Libor's not-so-imminent demise raises the prospect, again, of "Zombie Libor." This is the notion that the reference rate sticks around, albeit in a half-living, half-dead form, with the number of submitting banks dwindling until you have something that's unrepresentative of the market, more volatile and still tied to trillions of dollars worth of financial assets. There are some signs this is already happening: The number of Libor panelists has been falling steadily, while 30-day volatility has been ticking up even as the rate itself drops. Spooky! 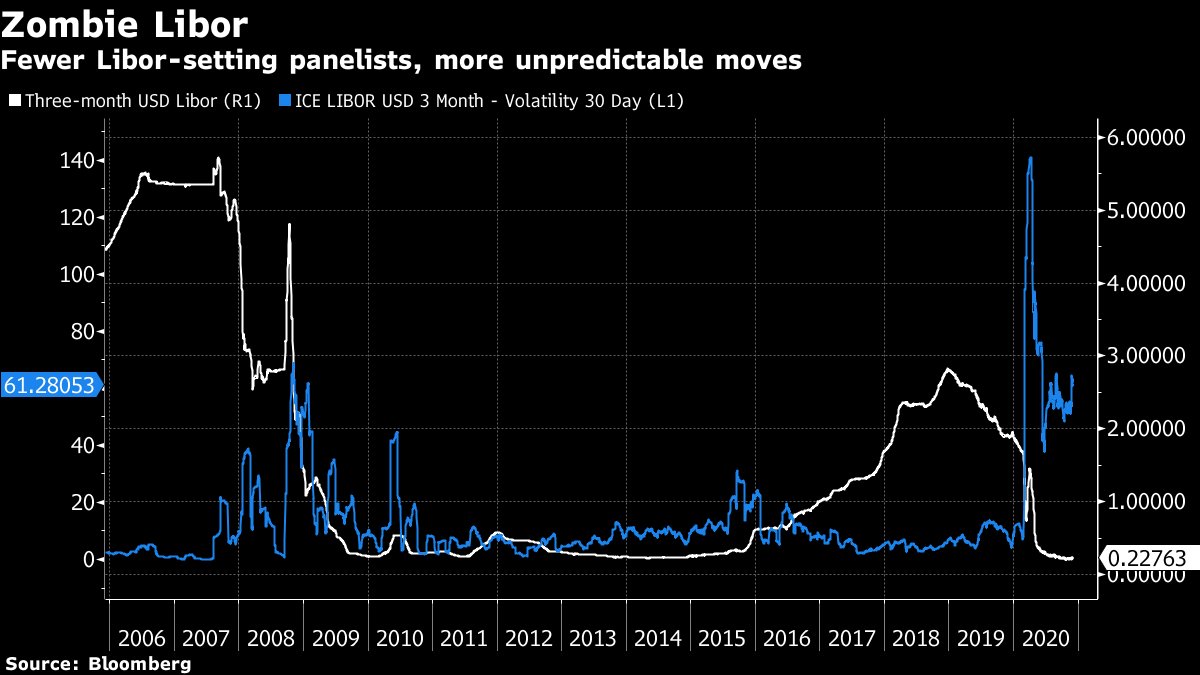