Good morning. Europe risks being left behind in the race to vaccinate, France warned it could veto a post-Brexit trade deal and OPEC+ is making headway. Here’s what’s moving markets.

Now that Britain beat the rest of the world in approving a German-U.S. Covid vaccine candidate, the U.S. looks to be next in line, with an FDA decision on the shot expected in mid-December. While vaccines could begin rolling out in the U.S. and Britain before the end of the year, research firm Airfinity projects that the EU’s first doses won’t arrive until January. After the approvals process, the high-stakes rollout process of the different vaccines will be in focus. Here, too, Europe is expected to reach the critical threshold of immunizing two thirds of its population months after the U.K. and U.S., in September next year. The U.K.’s approval of the vaccine could be the start of the rebound from its worst recession in three centuries, Chancellor of the Exchequer Rishi Sunak said on Wednesday.

France warned it could veto a trade deal between the U.K. and the European Union if it doesn’t like the terms, piling pressure on the EU negotiating team not to make further concessions as talks build to a climax. At a meeting of the bloc’s 27 ambassadors on Wednesday, the French envoy warned chief Brexit negotiator Michel Barnier that it would look bad if he brokered a deal only to see it vetoed by EU leaders, according to a diplomatic note from the meeting seen by Bloomberg. After nine months of work, the negotiations have reached a delicate point, with officials on both sides saying that a deal could be done in the next few days. EU leaders must approve any deal unanimously if it is to take effect, meaning Barnier has to keep all member states on board.

Boeing is closing in on two key milestones in the comeback of its 737 Max, according to people familiar with the matter: the jet’s return to regular service and the first delivery since U.S. regulators lifted a 20-month grounding. United Airlines is expected to receive the first Max delivery since the flying ban was imposed in March 2019 after two deadly crashes, the people said. In another boost for the planemaker, Brazilian airline Gol said it will resume commercial flights with the Max on Dec. 10. Grupo Aeromexico and Panama’s Copa Holdings are also planning flights soon. A Ryanair order for more jets of the embattled type could be announced as early as today, people familiar told Bloomberg.

OPEC+ is making headway in its negotiations on oil-output cuts, raising the chances that today’s meeting can salvage a deal after failed talks earlier in the week. After days of direct negotiations between the group’s heavyweights — Russia, Saudi Arabia and the UAE — discussions are now focusing on proposals for gradual easing of output cuts over several months, said a delegate. Initially, talks had centered on delaying the January production hike by three months, but that option ran into obstacles on Monday amid a clash between Saudi Arabia and the UAE. Since then, delegates have been trying to find a way forward.

European and U.S. stock futures are broadly neutral. The morning's earnings agenda includes homebuilder Countryside Properties, mortgage lender Paragon and virus-battered Nordic airline SAS, whose full-year sales are expected to drop by more than half. In the afternoon, get ready for weekly U.S. jobless claims, which economists on average expect to remain steady.

The life story of a once-sleepy exchange-traded fund covering the global airline sector is an interesting example of how contrarian investors get to work. As my colleague Jan-Patrick Barnert noted Wednesday, the five-year old U.S. Global Jets ETF had struggled to attract more than $125 million in assets before this year and had assets of just $30 million when markets went into freefall in March. But as the financial world was panicking at the scale of the virus spread, what we might now call smart money was already at work. That month the fund's price had halved before markets bottomed, yet cash was already pouring in, pushing total assets to nearly $200 million by March 23. That was just the beginning as investors piled into the recovery trade with assets soaring to almost $2.8 billion this week. The fund has surged 87% from a low in May following government agreements to provide aid and growing prospects for an early vaccine rollout. If the brave investors in March managed to average in at the right price, they have earned their place in the first class cabin by buying when it seemed to be the very last thing you should do. 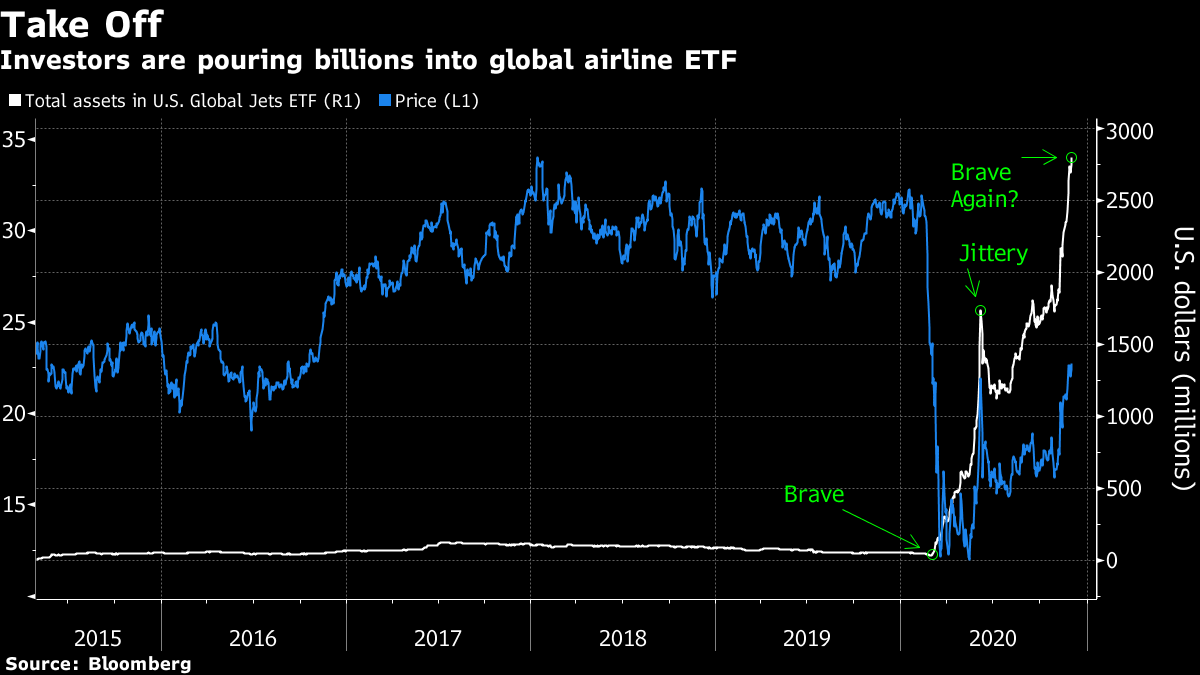