House Speaker Nancy Pelosi and Senate Democratic leader Chuck Schumer said a $908 billion proposal from a bipartisan group of lawmakers should serve as the baseline for negotiations with Congressional Republicans and the White House. It's the first real break from entrenched divisions and puts pressure on Senate Majority Leader Mitch McConnell to negotiate a deal that could be included in the year-end spending bill.

The rapid progress on vaccines to fight the spread of the pandemic is great news, but even with the best will in the world it will be well into next year before the spread is under control. Until then, restrictions are likely to remain in place, tightening when needed to control a surge like in Los Angeles where Mayor Eric Garcetti issued a stay-at-home order. Announced Covid fatalities topped 2,700 yesterday, the deadliest day yet in the country from the disease, with total deaths from the virus likely to pass 300,000 in the next two weeks.

The delayed OPEC and its allies meeting kicks off today, with delegates suggesting that the cartel is closing in on a deal for output cuts after days of behind-the-scenes negotiations. The proposal on the table is to extend the current production levels for one month beyond the Jan. 1 end of the current agreement and then gradually ease the curbs on output over several months. Front-month futures in both West Texas Intermediate and Brent crude slipped slightly this morning ahead of the meeting.

Global stocks eased slightly from fresh record highs as investors await news on the progress of a new stimulus package in Washington. Overnight the MSCI Asia Pacific Index added 0.6%, with Japan's Topix index closing 0.1% higher. In Europe, the Stoxx 600 Index was 0.3% lower by 5:50 a.m. Eastern Time with uncertainty over the EU's future relationship with the U.K. continuing to weigh on sentiment. S&P 500 futures pointed to a small drop at the open, the 10-year Treasury yield was at 0.933% and gold added to recent gains.

Today's initial jobless claims at 8:30 a.m. come with a health warning as the data can be unreliable around holiday periods, according to Bloomberg Economics. Expectations are for 775,000 new claimants. U.S. November Markit services and composite PMIs are at 9:45 a.m., with ISM non-manufacturing at 10:00 a.m. Companies reporting earnings include Dollar General Corp., Michaels Cos Inc. and Toronto-Dominion Bank.

I always come back to the ratio of the S&P 500 to the price of an ounce of gold. It's one of my favorite measures as a great proxy for optimism versus pessimism. Are you betting on human ingenuity or are you betting on a metal whose main investing proposition is that it doesn't tarnish, and so will withstand the tides of history. Anyway, that ratio plunged of course back in March, but has been slowly clawing its way back. It's still not there yet though, as it has about 7% further to run to reach its February highs. So while lots of markets are flying, here's one measure that shows the crisis hasn't quite been put out of investors' minds. 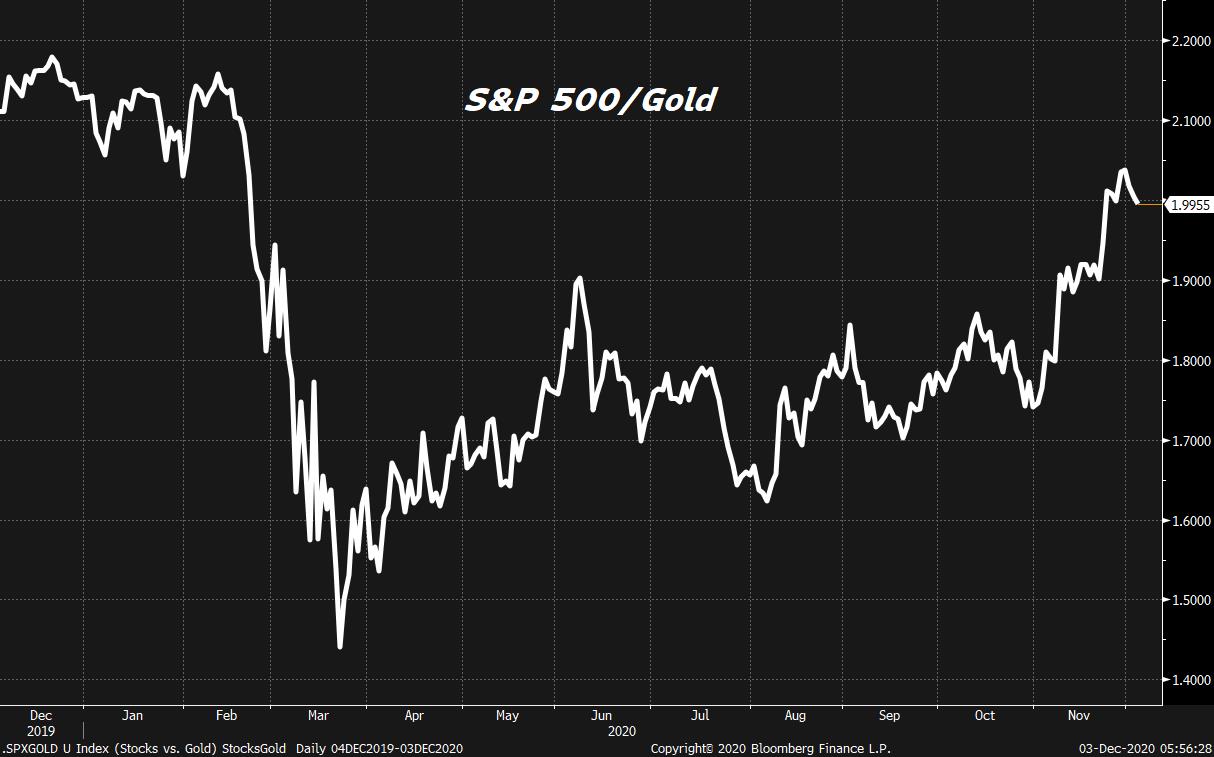 Protected: OP: Seven in a Row