McConnell remains stimulus roadblock, the election is nearly over, and Brexit talks flounder.

The optimism for a stimulus deal by the end of the year is waning a little as Senate Majority Leader Mitch McConnell continues to push his own plan and hold a hard line on introducing federal limits on Covid-19 lawsuits against businesses. There is little time left to come to an agreement. The House is due to vote on a continuing resolution on Wednesday to keep the federal government running for another week to iron out wrinkles on a potential omnibus bill that could encompass stimulus spending.

Today is the deadline for states to certify their electors for the Electoral College. After that, there's little chance of any legal challenges overturning the outcome of the Nov. 3 election. Despite spending $8.8 million on efforts to reverse the result of the count, President Donald Trump has failed to make any progress. President-elect Joe Biden continues to build out his cabinet, with people familiar with the matter saying he plans to nominate retired Army General Lloyd Austin as defense secretary.

U.K. Prime Minister Boris Johnson said talks with the European Union are "very tricky" but he still hopes to reach a deal. He is due to meet European Commission President Ursula von der Leyen in Brussels this week after phone calls between the pair over the past few days and further negotiations failed to produce any breakthrough. Investors have been caught a little off-guard by the deteriorating prospects of a deal, as an agreement seemed close last week. Johnson had one reason to celebrate as the U.K. today became the first western country to start vaccinating its population against Covid-19.

Lack of progress on stimulus hold-ups and the worsening toll from the pandemic that's causing further restrictions across the world are weighing on sentiment. Overnight, the MSCI Asia Pacific Index slipped 0.1% while Japan's Topix index closed down 0.1%. In Europe, the Stoxx 600 Index had dropped 0.3% by 5:50 a.m. Eastern Time with travel-related shares among the biggest losers. S&P 500 futures pointed to a similar drop at the open and the 10-year Treasury yield was at 0.936%. Oil eased a little and gold was broadly unchanged.

U.S. third-quarter nonfarm productivity and unit labor costs data are at 8:30 a.m. The U.S. Federal Communications Commission begins an auction of so-called C-band frequencies which will increase spectrum for 5G wireless networks. President Donald Trump is scheduled to hold a "vaccine summit" at the White House. H&R Block Inc. AutoZone Inc. and GameStop Corp. are among the companies reporting results.

Throughout this crisis, one of the more worrisome economic trends has been the rise in permanent unemployment. Initially the headline unemployment rate soared to unimaginable levels, but that was mostly driven by temporary furloughs on account of the virus and related restrictions. Since then we've seen a sharp drop in unemployment, however, most of the improvement has just been the reversal of said temporary layoffs. Meanwhile, permanent layoffs have picked up at a pace faster than prior to the Great Recession.

But there are signs that maybe things are starting to abate a little bit. Here's the chart from Calculated Risk on the permanent job-loss trajectory versus the last two recessions. As you can see, we're still on a worse pace overall than pre-GFC. However the deterioration has slowed down over the past few months. While it may worsen further yet, particularly if the next few months are rough on the virus front (as expected), it's not in complete freefall like it was a few months ago. Prior to the last crash, the permanent layoffs gathered stream in basically a straight line down. This deterioration has been more halting. It's still worrisome, but it's looking less like a relentless collapse now, and hopefully it can reverse sharply post-vaccine. 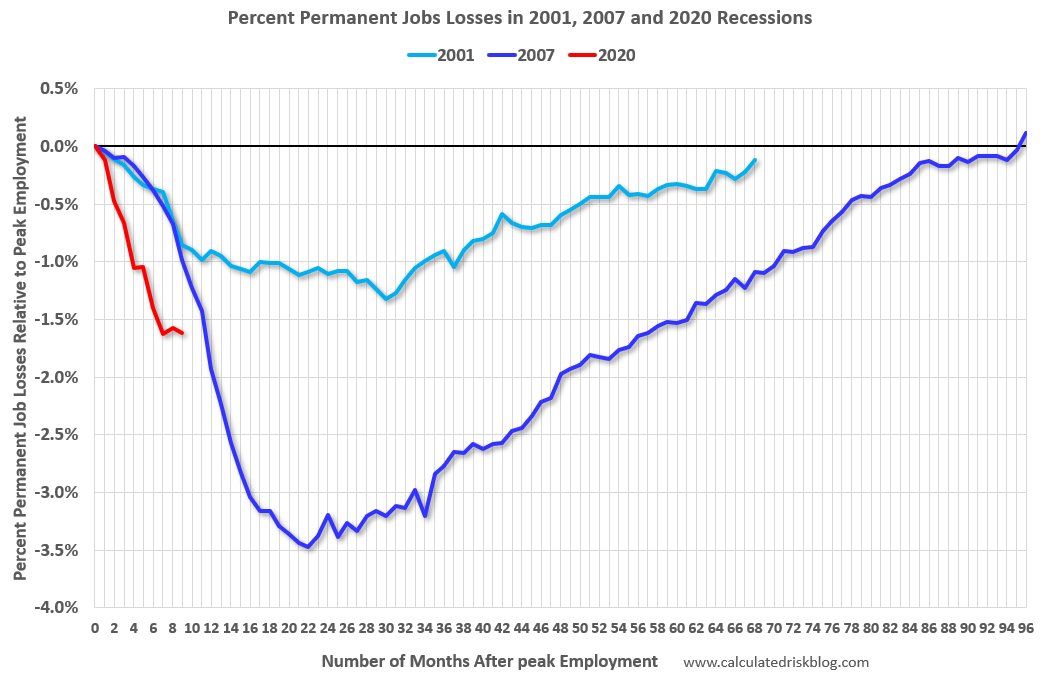