Treasury Secretary Steven Mnuchin's proposal for a $916 billion pandemic relief package is seen by some as boosting the chances of reaching a deal. It is the first move by the Trump administration since Election Day, and comes a week after Democrat leaders in Congress dropped their demands for a multi-trillion dollar package. House Speaker Nancy Pelosi and Senate Democratic leader Chuck Schumer called it progress but seemed to prefer to concentrate on the bipartisan negotiations already underway. There is a possibility of movement on the latter, with Senate Majority Leader Mitch McConnell suggesting for the first time he would be willing to set aside his demands for business liability protection.

Germany saw its largest daily death toll from the coronavirus yesterday, pushing the number of fatalities in the country past 20,000 and leading to a plea from Chancellor Angela Merkel in parliament to do more to stop the spread of the virus. In the U.S., coastal states are back as the hotspots, with Midwest states like North Dakota and Minnesota seeing numbers drop. The U.K. vaccination program continues, and a report by staff of the U.S. Food and Drug Administration said there are no safety concerns that would prevent the Pfizer Inc.- BioNTech SE shot from being granted emergency-use authorization ahead of tomorrow's meeting of outside advisers.

U.K. Prime Minister Boris Johnson will travel to Brussels today for dinner with European Commission President Ursula von der Leyen as both sides try to find some way of progressing Brexit trade negotiations. While official statements from both camps point to hopes of reaching a deal, significant differences remain on key issues. Pressure to seal an accord is high, with the current transition period ending in three weeks, and U.K.-based companies already starting to feel the squeeze from Brexit preparations as they struggle to deal with the pandemic at the same time.

Markets are gaining ground today as the entry of the White House into stimulus talks boosted optimism for a deal. Overnight the MSCI Asia Pacific Index gained 0.8% while Japan's Topix index closed 1.1% higher. In Europe, the Stoxx 600 Index had risen 0.6% by 5:50 a.m. Eastern Time with almost every industry sector in the green. S&P 500 futures pointed to a slightly higher open and the 10-year Treasury yield was at 0.944%. Oil rose in the wake of attacks on facilities in Iraq, and gold slipped.

The Bank of Canada is expected to hold rates, asset purchases and guidance unchanged when it announces its latest policy decision at 10:00 a.m. U.S. wholesale trade sales and inventories data for October and job openings numbers for the month are also at 10:00 a.m. At 1:00 p.m., the U.S. sells $38 billion of 10-year notes. DoorDash Inc. has its trading debut. Designer Brands Inc. and Campbell Soup Co. are among the companies reporting earnings.

The yield on 10-year U.S. Treasuries is still incredibly low, but it has crept up a little bit over the last few months amid the economic recovery and the rally in the stock market. And so from time to time the question comes up whether higher yields will eventually hurt the stock market, which currently sits at record highs when looking at almost any index.

But higher yields, themselves, aren't really a problem for the market. For one thing, there are plenty of periods where rates have risen substantially while equity prices have risen. The period from the middle of 2016 until late 2018 — which saw yields go from 1.35% to over 3.2% — stands out. 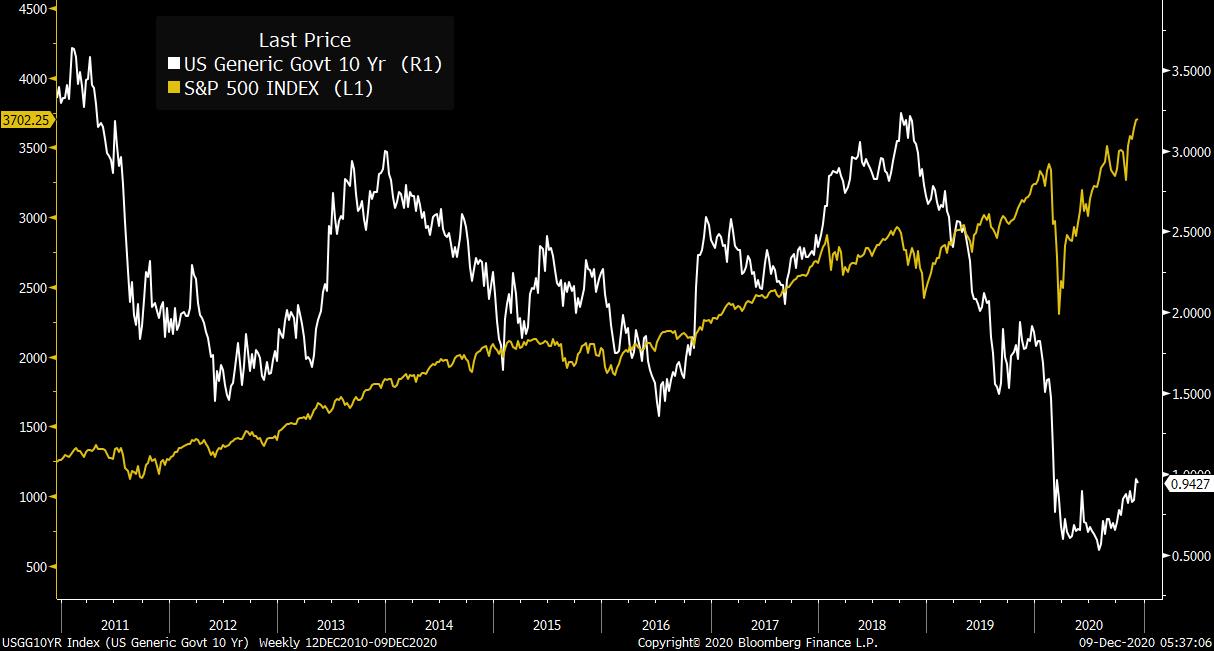 But more importantly, the question itself misses the point. What matters is not whether yields go up, but why yields are going up. The yield on a bond reflects the expected Fed policy path in the years ahead. If the Fed is expected to hike rates more frequently because growth is super strong, then there's no particular reason to think that's a bad condition for stocks. After all, growth is good. That means revenue and profits.

But in theory the Fed could hike rates if inflation is seen as getting out of hand. If suddenly inflation started surging on a sustained basis in the absence of robust growth overall, the market might bet on the Fed hiking rates simply to tame it – in which case stocks could plausibly fall. Or if FOMC members suddenly started getting cold feet about its Average Inflation Targeting framework, and signaled that, all else equal, it would start to hike faster than the market had expected, again, that could push up rates and hurt the market.

Bottom line: There's nothing incompatible about rising rates and rising stocks. But if rates rise for reasons other than increased economic optimism, things could get dicey.