No stimulus deal yet, no Brexit deal likely, and experts agree on Pfizer vaccine.

Just when it was starting to look like a deal could be done in Washington, talks between Democrats and Republicans have gotten hung up again on the issues of business liability and state aid. The progress of the past few days where talks between both sides had coalesced around a $900 billion figure sparked optimism that a deal could be agreed in the next week. Now Senate Majority Leader Mitch McConnell wants lawmakers to proceed with a smaller bill that doesn't include state government aid and business liability protection. Further adding to fiscal woes, the Senate yesterday postponed a vote on a one-week stop-gap bill that would keep the government funded beyond today.

This weekend sees the final, last, ultimate, no going back, no extension deadline for talks between the European Union and the U.K. on reaching a post-Brexit trade deal. Probably. U.K. Prime Minister Boris Johnson warned businesses and the public to prepare to leave the European Union’s single market without a deal and EU leaders only discussed the issue for 10 minutes at their all-night summit on Thursday. Negotiators have gone back to work, and have until Sunday night to reach a compromise.

A committee of independent vaccine experts in the U.S. backed the Pfizer Inc. and BioNTech SE vaccine, a step that will likely lead to emergency-use authorization from the Food and Drug Administration. The shot can't come fast enough for Americans who are facing renewed outbreaks in previous hotspots and thousands of deaths per day from the pandemic. The surge in cases and fatalities in Germany also continues, with another day of record deaths increasing the chances of a hard lockdown over the holiday period.

With U.S. stimulus optimism rapidly evaporating and all signs pointing to the pandemic getting worse before it gets better, stock investors see good reason to reduce their risk exposure. Overnight, the MSCI Asia Pacific Index added 0.3% while Japan's Topix index closed 0.3% higher. In Europe, the Stoxx 600 Index had dropped 1.2% by 5:55 a.m. Eastern Time. S&P 500 futures pointed to plenty of red at the open, the 10-year Treasury yield was at 0.89% and gold was slightly lower.

U.S. producer price data for November is at 8:30 a.m., with the University of Michigan consumer sentiment numbers for December at 10:00 a.m. What has been a strong week for oil gets rounded off with the Baker Hughes rig count at 1:00 p.m. Kansas City Fed President Esther George and Fed Vice Chair for Supervision Randal Quarles speak later.

The European bond market is all but dead. The latest action from the European Central Bank — which has extended its pandemic bond buying program and added another 500 billion euros ($607 billion) – is another nail in the coffin.

Even before Thursday's decision, investors were feeling muscled out of the market. Volumes in bund futures have slumped more than 60% since the ECB started buying bonds and yield ranges have collapsed across the region, our Brussels reporter John Ainger wrote this week in his study of a trader's nightmare. The ECB will own roughly two-fifths of each of its two largest sovereign markets, Germany and Italy, by the end of next year, according to Bloomberg Intelligence.

European markets did have just enough vim Thursday to register disappointment at the central bank's additional commitment, in particular the optimistic caveat that it "need not be used in full." The euro strengthened, Bund yields twitched, and Spanish 10-year yields, which were closing in on zero just hours before, edged as much as 5 basis points higher.

The market reaction is probably a reflection of the ECB's "flexible" approach to purchases, to keep financial conditions in check where needed, Barclays strategists including Cagdas Aksu point out. In their view, that whiff of ambiguity should help boost term premium, pushing longer end rates higher and steepening curves in a controlled way. Sound familiar?

"Even if there is no explicit yield curve control, we think the current policy backdrop is not far from it indirectly. In fact, we find the pace guidance from the press conference as somewhat similar to BoJ guidance."

That analogy actually underpins Barclays support for a steeper curve in Europe, as the Bank of Japan's gradual tapering of purchases to maintain the 10-year around zero actually allowed the long end of the curve to lift, and "has contributed to steepening at times."

It's still tough to imagine. Spain was able to sell its first debt at a yield below zero this week, with investors effectively paying the government to take their money for 10 years. Italy and Greece are now among the last remaining euro zone members with yield curves above zero, and the global swamp of negative-yielding debt this week sprawled beyond $18 trillion. Even Australian bank bills saw yields drop sub-zero.

And that's despite a teeming primary market. Syndicates have had a stellar year raising the cheapest debt on record, pumping out more than 1.7 trillion euros ($2.1 trillion) of bonds. 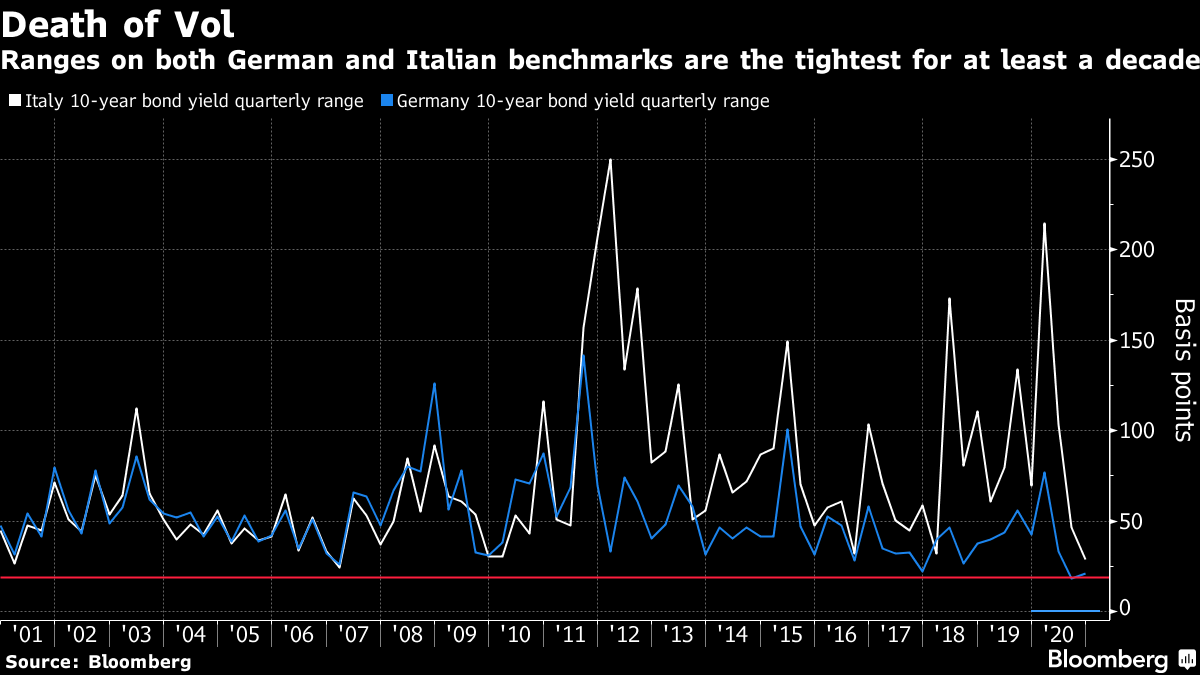 At least the path ahead for the EU's historic fiscal spending effort is looking less thorny. Standouts Hungary and Poland finally overcame their objections to a rule-of-law provision, with a little smoothing from Germany, clearing the way for the $2.2 trillion budget and stimulus package.