London is moving into the highest level of Covid-19 restrictions under the U.K.'s lockdown rules following a surge in cases, including many involving a new variant of the virus. New York hasn't gone for a full lockdown yet, but the city's mayor warned that it should be prepared for such an eventuality, with a warning to avoid becoming complacent even if a vaccine is now rolling out. This follows a series of new curbs put into place in Europe, including a strict five-week lockdown in the Netherlands, and questions about the planned vaccination program in Brazil, one of the global hotspots for the virus.

The breakthrough in Brexit talks didn't arrive over the weekend nor on Monday, with the suggestion now that a deal could get done this week, albeit with the caveat that differences still remain between the two sides. Here's an overview of how the deal could get done, with the level playing field and fishing rights still the two sticking points. As the negotiations continue, the chief executive of plane maker Airbus said a no-deal outcome could threaten its investment plans in the U.K.

Electoral college members cast their votes on Monday and made it official that Joe Biden won the U.S. election. The President-elect then made a call for unity, saying the country needs to "turn the page" following weeks of President Donald Trump's unsubstantiated claims of election fraud and rejected legal challenges to the result, the latter a part of the reason that Attorney General William Barr has stepped down early. Biden's aides said he now has a "clear mandate" from the American people. That should also allow attention to move back to the stimulus measures U.S. lawmakers are debating, with new legislation published on Monday which could help to break the months-long impasse.

China's economic recovery is gathering momentum, with strong domestic and overseas demand showing through in its November data. Industrial output and retail sales both grew in line with expectations and unemployment inched slightly lower, with the overall picture one of a broad recovery following the Covid-induced contraction earlier in the year. China's central bank is also pumping more money into the country's financial system to underpin the recovery, offering more medium-term loans to ensure its lenders have sufficient liquidity.

European stock futures are pointing lower heading into Tuesday's session amid growing concerns about the wave of stricter lockdowns, with Asian shares having fallen amid virus curb caution. Tighter restrictions have also pulled oil prices down from nine-month highs on renewed worries about demand. Europe's earnings calendar is dominated by two of the leading names in fast-fashion, Spain's Inditex and Sweden's H&M. U.K. unemployment data tops the economic data agenda.

As traders gear up for this week's Federal Reserve meeting, it can't have escaped policy makers that financial conditions are already pretty darn easy. In fact as my colleague Rich Miller noted Monday, U.S. financial conditions are now at the easiest on record in data going back to 1990, according to an index complied by Goldman Sachs. The gauge takes into account variables such as short- and long-term interest rates, the trade-weighted value of the dollar, credit spreads and stock prices. Traditionally a low value is a positive signal for growth as companies and consumers are encouraged to borrow and spend, but this also risks the formation of risk-asset bubbles and excessive leverage. Of course these are not traditional times and other financial indexes by Bloomberg News and the Federal Reserve Bank of Chicago do not suggest that conditions are as loose as Goldman’s. But, together with the rollout of the first vaccine shots in the U.S., this prominent gauge at a record does lend weight to the case that the Fed will keep the status quo. 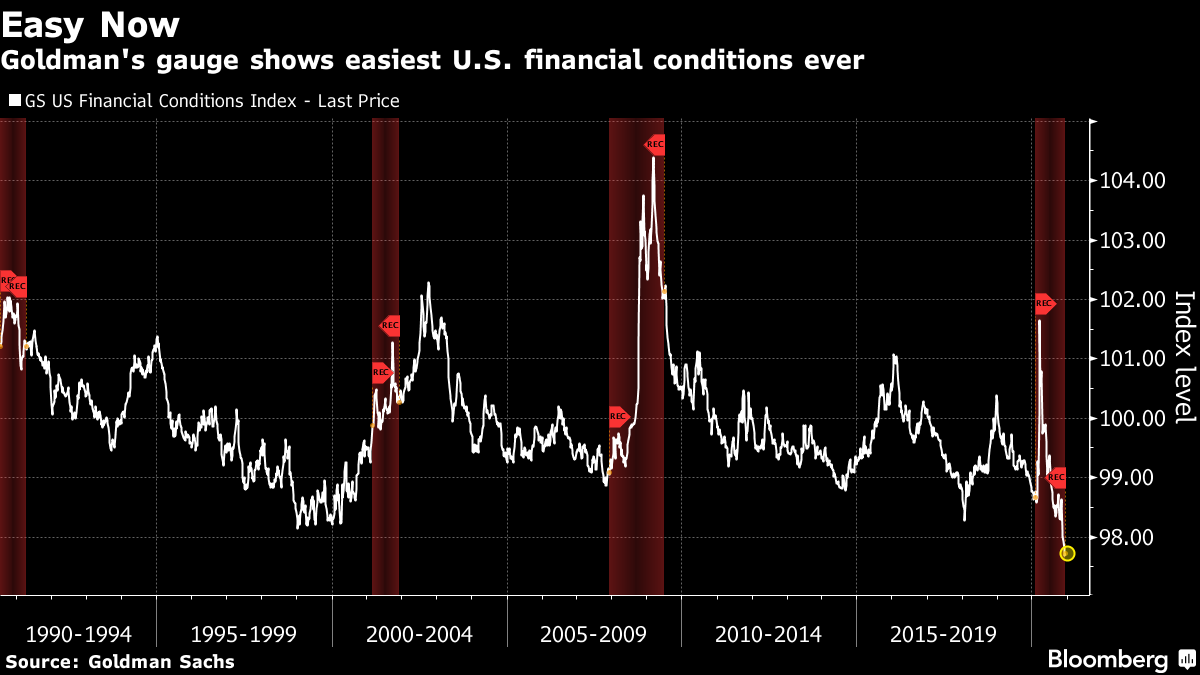