European Union leaders cleared the bloc's 1.8 trillion-euro stimulus package, clearing the path for a much-needed injection of funds as Covid-19 resurges in many nations. In the U.K., the government is sticking to its plans to temporarily ease restrictions over the festive period, though Prime Minister Boris Johnson urged "extreme caution" as families meet. Denmark is heading into lockdown, with a warning that the toughest weeks for the country are yet to come. And in the U.S., the first setbacks in distributing a vaccine occurred.

Federal Reserve Chairman Jerome Powell struck a note of optimism in his press conference following the central bank's latest decision. The Fed said it will maintain its huge bond-buying program until "substantial" progress is seen in employment and inflation. Powell echoed that pledge to continue providing support to the economy and said he expects a strong performance in the second half of 2021 as more Americans are vaccinated against Covid-19, though that was offset by a caution on what will be a "challenging" next few months.

The Brexit talks, keenly in focus all week once again, do appear to be headed for a finale with fishing rights the main area of disagreement remaining between the U.K. and European Union. Officials were cautiously predicting that a deal may be done in coming days, though the gap between the two over fisheries is said to remain substantial. The U.K. is also planning to ease stock-trading requirements in order to entice investors to do business in London, where the wait for a deal is fraught with anxiety as it comes in addition to harsher Covid restrictions.

Bitcoin topped the $22,000 mark for the first time on Thursday, a vertiginous rise for the cryptocurrency that continues to stir debate about what lies ahead. An illustration of the dizzying rise could be seen in a small digital-asset fund which saw its share price balloon way above the value of the Bitcoin or Ether tokens it holds. And the predictions on how much further the rise has to go are wild, ranging from $400,000 to $1 million per token.

Policy decisions by the Bank of England, Norway's Norges Bank and the Swiss National Bank are all coming up, the latter a day after the U.S. designated Switzerland as a currency manipulator. The economic and earnings calendars are both relatively quiet for Europe. Oil prices are higher on a drop in U.S. crude supply and the Fed's continuing support for the economy helped gold to hold on to its gains.

China has become the magic ingredient for outperformance in the European stock market and beyond. The country's accelerating recovery is boosting the share prices of European companies that generate significant revenue from the world’s second-biggest economy. A Goldman Sachs Group Inc. basket of European stocks with the highest sales exposure to China has climbed almost 12% over the last three months, besting the regional benchmark by 5 percentage points. A similar gauge of global stocks from MSCI Inc. is up a whopping 21%, beating the global benchmark by around 10 percentage points. The outperformance of China-exposed shares comes as stocks in the country itself struggle for traction, with the Shanghai Composite Index up just 2% over the period. Data released Tuesday showed China’s recovery gathered momentum in November, with industrial production, fixed asset investment and retail sales figures coming in line with expectations. The gap between the Middle Kingdom and its major peers in getting back to economic normality has widened in recent months, thanks to the resurgence in coronavirus cases in places like the U.S. and Europe. China's economy is likely the only major one that will expand this year and investors are rewarding those firms with the biggest exposure to it. 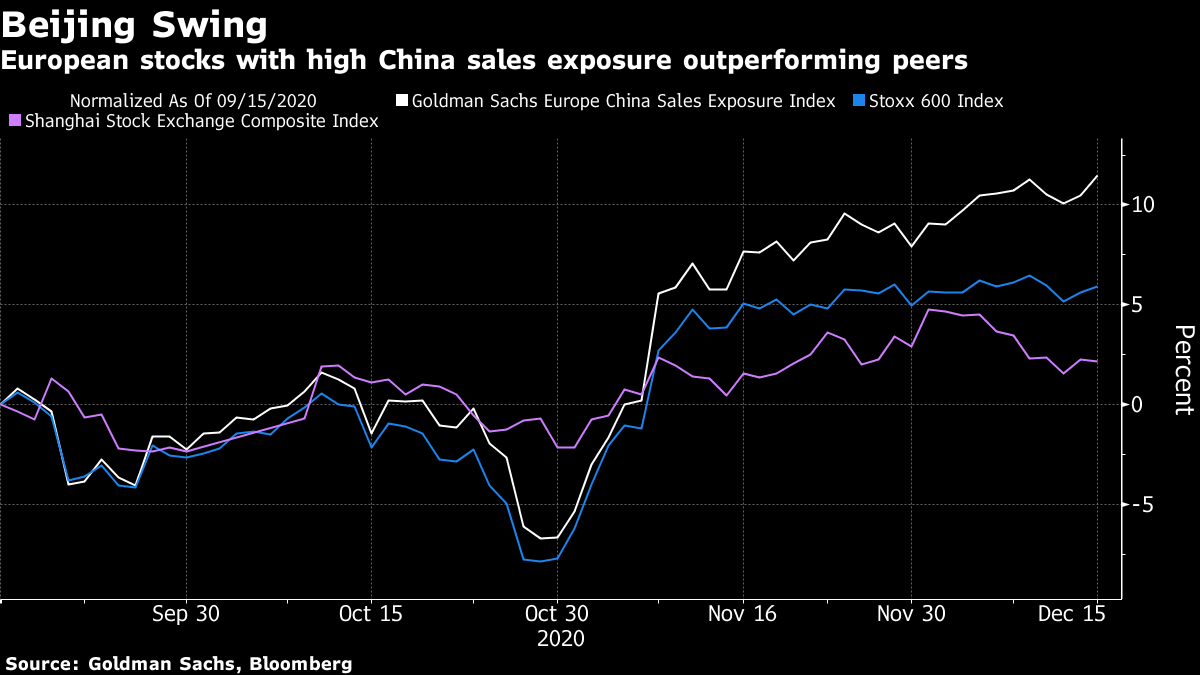