Not quite there yet on stimulus, still trying for a Brexit deal, and Moderna vaccine gets nod for approval.

The devil is definitely in the detail on the U.S. fiscal stimulus package that continues to grind slowly toward agreement. The current sticking points are Democrat requests for federal funds to match 100% of FEMA payouts for pandemic-related disasters and Republican demands to end the Federal Reserve’s emergency lending program. With government funding due to run out tonight, there is a small chance of a short shutdown if agreement isn't reached today. House Majority Leader Steny Hoyer said leaders will decide by Friday morning whether to bring up a stopgap bill for a vote.

If you're thinking that Congressional talks on stimulus have been going on forever, take a look at Europe where Brexit-related negotiations have been ongoing for years. The European Union’s chief Brexit negotiator, Michel Barnier, told the region's parliament this morning that talks are at "the moment of truth" with only hours left to reach an agreement. U.K. Prime Minister Boris Johnson said yesterday that talks are in a "serious situation" as a stand-off over fishing rights continues to hold up any agreement. Traders are still expecting more fireworks between now and the end of the year, when the current post-Brexit transition period ends.

As expected, U.S. Food and Drug Administration advisers backed Moderna Inc.'s vaccine for emergency-use authorization. Despite some production difficulties, Moderna said it remains on track to provide 20 million doses this month and 85 to 100 million to the U.S. in the first quarter of next year. Measures to slow the spread of the pandemic are likely to remain in place well into 2021, with the current situation in many countries remaining grim.

Global stock markets are having a fairly slow session in what is the last trading Friday of the year for most. Overnight the MSCI Asia Pacific Index slipped 0.4% while Japan's Topix index closed less than 0.1% higher. In Europe, the Stoxx 600 Index had gained 0.1% by 5:50 a.m. Eastern Time as investors watched for any progress on Brexit talks. S&P 500 futures pointed to little change at the open, the 10-year Treasury yield was at 0.943% and both oil and gold were slightly lower.

The U.S. third-quarter current account is expected to show a deficit of $187 billion when the data is published at 8:30 a.m. Canadian October retail sales are also released at that time. The U.S. Leading Index is at 10:00 a.m. and the Baker Hughes rig count is at 1:00 p.m. Nike Inc. reports earnings today.

Chairman Jerome Powell refused to be boxed in during the Federal Reserve’s last policy meeting of 2020. The statement had a similar tone to those over the past few months: the economy is improving, but the next few months will be challenging. The majority of Fed officials see rates near zero at least through 2023. Inflation remains well below target.

But naturally, it was the future of the Fed’s asset purchasing program that got bond markets buzzing. Policy makers voted to maintain bond buying of at least $120 billion per month until they see “substantial further progress” in employment and inflation, scrapping the previous pledge to continue purchases “over coming months.”

But as for what qualifies as “substantial,” Powell was coy. He told reporters at the press conference that he “can’t give you an exact set of numbers,” but that the economy was “some ways off” from reaching that point.

To Grant Thornton’s Diane Swonk, Powell’s demurring was masking deep divisions among committee members about how the central bank will gracefully disentangle itself from bond markets.

“It was the least possible guidance the Fed could offer in terms of asset purchases going forward. The Fed doesn’t know how it’s going to extricate itself from these purchases going forward,” said Swonk, Grant Thornton’s chief economist, in a Bloomberg TV interview. “You really saw the Fed chairman be extremely uncomfortable talking about that.” 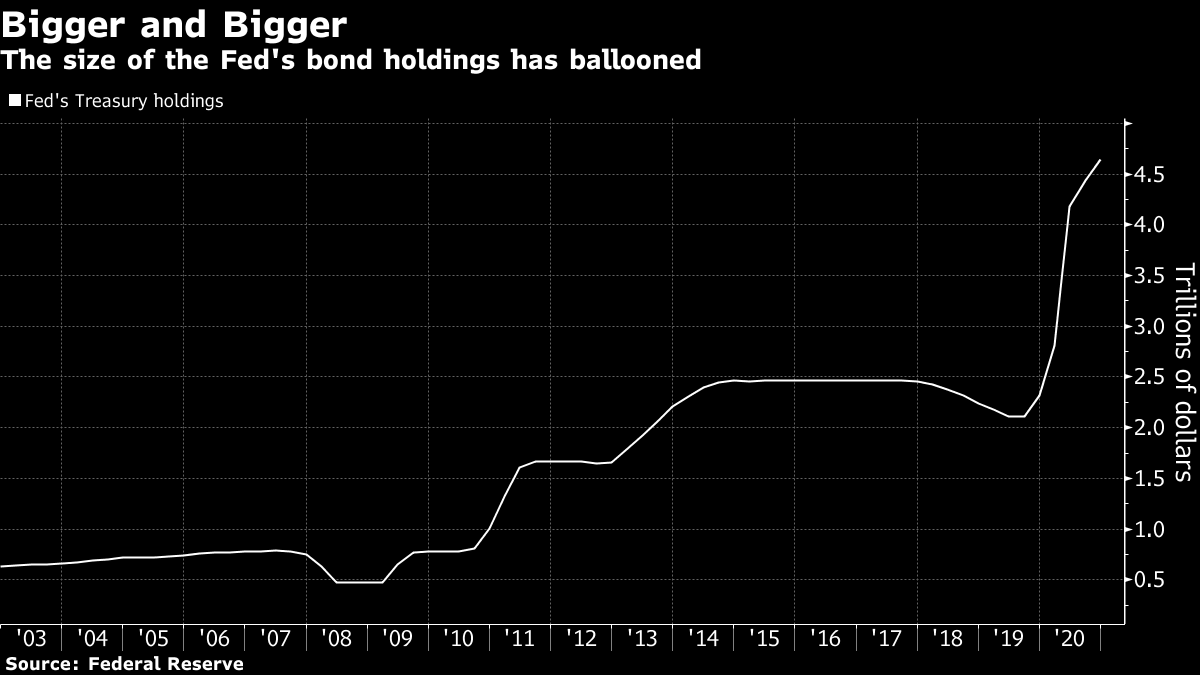 Others disagree. Powell’s performance was one of a Fed chair simply trying to maintain optionality and avoid getting “painted in a corner,” according to Hirtle Callaghan & Co.’s Mark Hamilton. Rather than assign a numerical target for the unemployment rate or inflation readings and have markets fixate on the possibility that the Fed would scale back asset purchases when approaching that figure, being deliberately vague preserves flexibility for policy makers – and protects against the kind of market wobble seen in 2013.

“Think about the taper tantrum that they inadvertently triggered — they don’t want to do that,” said Hamilton. “What they’re trying to do is remind everybody that there’s a very deep hole there and we’re going to give the economy plenty of time to dig itself out, so we’re not going to focus on an end date or conditions for an end date.”

Still, although it’s abundantly clear the U.S. labor market recovery has stalled and November retail sales were particularly ugly, the economy hasn’t deteriorated to the point where the Fed would need to pull the trigger.