We wake up to chaos in the U.K. travel sector as Italy, the Netherlands and Belgium shut their borders to the country, and others prepared to follow suit, amid the rapid spread of a mutant strain of the coronavirus in Britain that saw the government abruptly cancel Christmas and ramp up social restrictions. Airlines that were seeing a glint of festive bustle are now stopping flights or sending empty planes to fetch stranded Brits. It was a weekend of blows for the former European Union state as Brexit trade talks missed another deadline amid few signs that either side is ready to compromise. The pound is slumping this morning.

Congressional leaders in Washington finally reached a deal on a roughly $900 billion spending package to bolster the U.S. economy, marking one of the largest economic rescue measure in the nation’s history. A last-minute dispute over the Federal Reserve’s emergency lending authority threatened to derail the pact until a late compromise cleared the way for the broader deal. The House it expected to vote on it today, followed by the Senate. U.S. stock futures were little changed, while Europe's slid.

European Union regulators will review the Pfizer and BioNTech Covid-19 vaccine this week, while Switzerland has already authorized it. As many as three vaccines could be available in the West by year-end, leaving governments and scientists hopeful the pandemic could start to turn a corner in the first half of 2021. More than 1.1 million people have been vaccinated in the U.S., U.K., China and Russia, according to Bloomberg data. Still, the disease is unlikely to be eliminated any time soon.

At least 200 organizations, including government agencies and companies around the world, were hacked as part of a suspected Russian cyber-attack that implanted malicious code in a widely used software program, according to a cybersecurity firm and people familiar with investigations. The U.S. says a lengthy effort lies ahead to identify the extent of the hack, and to craft an appropriate response. President Donald Trump contradicted intelligence officials in suggesting the hack, first reported a week ago, may have been the work of China.

Oil futures are dropping as the European travel disruption dominates sentiment. Meanwhile, sportswear stocks like Adidas and Puma could get a boost after Nike's second-quarter revenue and profit topped expectations. And watch shares of big U.S. banks later after the Federal Reserve gave the sector a green light to resume billions of dollars in buybacks.

And finally, here's what Adam Haigh is interested in this morning

Worsening virus news in the U.K. over the weekend may not be that unexpected for many who've watched authorities struggle for months with containment. But on the other side of the world, in a country that's been a rare success story in handling the pandemic, the recent outbreak in Sydney has taken many by surprise and is threatening to test the run up in the local dollar. As the chart shows, the Aussie has been on a tear, strenghtening to the highest level in more than two years. Now that some states across Australia are putting up restrictions on incoming travellers from Sydney, the recent faster-than-expected pace of economic recovery could be under threat. Stocks of Australian travel and leisure-related companies fell in Monday trading, while companies tied to online markets rallied. The Aussie weakened as much as 0.9%. The next few days leading up to Christmas will be key, with some advocating for a city wide lockdown across Sydney. At present, the official advice is to curb travel, where possible. But with 83 reported cases as of midday Monday, the next few weeks could be a testing period for the hitherto resilient Australian dollar. 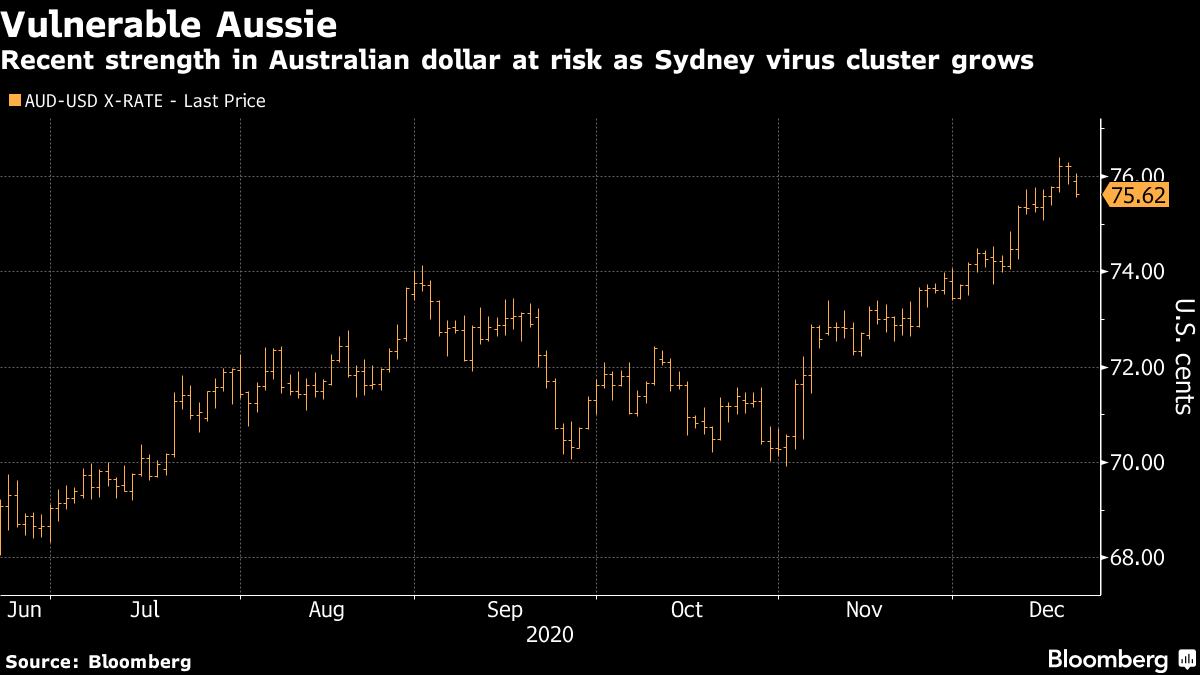 Adam Haigh is an editor for Bloomberg News covering global markets from Sydney.

Volatility exploded higher while you were asleep

Volatility exploded higher while you were asleep