The U.S. added more than 100 Chinese and Russian companies to a new list of firms it says have links to their nations’ militaries, a move that will sharply curtail certain types of exports. The list means anyone seeking to sell items that could eventually be used for military purposes to those firms will need a license. Seven subsidiaries of Aviation Industry Corp. of China were included, as well as Russia’s Foreign Intelligence Service which has been implicated in a recent cyber-attack on U.S. federal agencies. As Joe Biden takes office next month, he wields more leverage over Beijing than he would have ever sought.

Asian stocks look set to open weaker after U.S. equities joined a global decline as a new variant of the coronavirus in the U.K. and a wave of lockdowns and travel restrictions dampened spirits. Futures indicated shares will drop in Japan, Australia and Hong Kong. The S&P 500 Index slipped, dragged lower by losses for Tesla, which fell as much as 6% on its first day after being added to the U.S. benchmark. The yield on 10-year Treasuries retreated and the dollar climbed. Crude oil tumbled below $48 a barrel. In Europe, the Stoxx 600 Index slumped the most since October as Italy, the Netherlands, Belgium and France closed their borders to the U.K.

The final quarter of 2020 is set to mark the highest number of hostile and unsolicited bids for public companies in Australia and New Zealand on record, with 12 new approaches announced — even as the S&P/ASX 200 Index wiped out its year-to-date loss this month. By value at A$26.5 billion ($20 billion), that’s the most in any quarter since the third quarter of 2015. The momentum has continued through to December, when AustralianSuper made a NZ$5.4 billion ($3.8 billion) takeover offer for New Zealand infrastructure investor Infratil, but the bid was rejected.

South Korea has prevented the coronavirus from spreading uncontrollably by applying elite testing-and-tracing practices that have become a global model for managing the pandemic. Until now. While case numbers are still small compared to the U.S. and parts of Europe, the nation of 51 million saw new infections top 1,000 for five consecutive days through Sunday, a staggering jump from an average of about 100 in previous months. The fierce winter wave has alarmed a country that’s drawn pride from being globally lauded for its Covid-19 response.

Where to Spend the Pandemic

The long-anticipated rollout of coronavirus vaccines, as well as seasonal shifts, triggered some surprising shifts in Bloomberg’s Covid Resilience Ranking, a measure of the best places to be in the Covid-19 era. Sinagpore and Australia entered the top five while the U.S. and U.K. both slipped down the list, and the winter wave’s ferocity is testing those trying to tame Covid-19 without locking down. Here’s a look at how 53 economies are handling the pandemic.

A weaker dollar has been a major tailwind for economies and markets this year, helping to fuel China’s export boom and eroding funding costs for companies and countries that have binged on dollar-denominated borrowings. Now that dynamic is shifting as markets start to price in the possibility of further lockdowns in response to the new and more contagious strain of coronavirus emerging from the U.K. 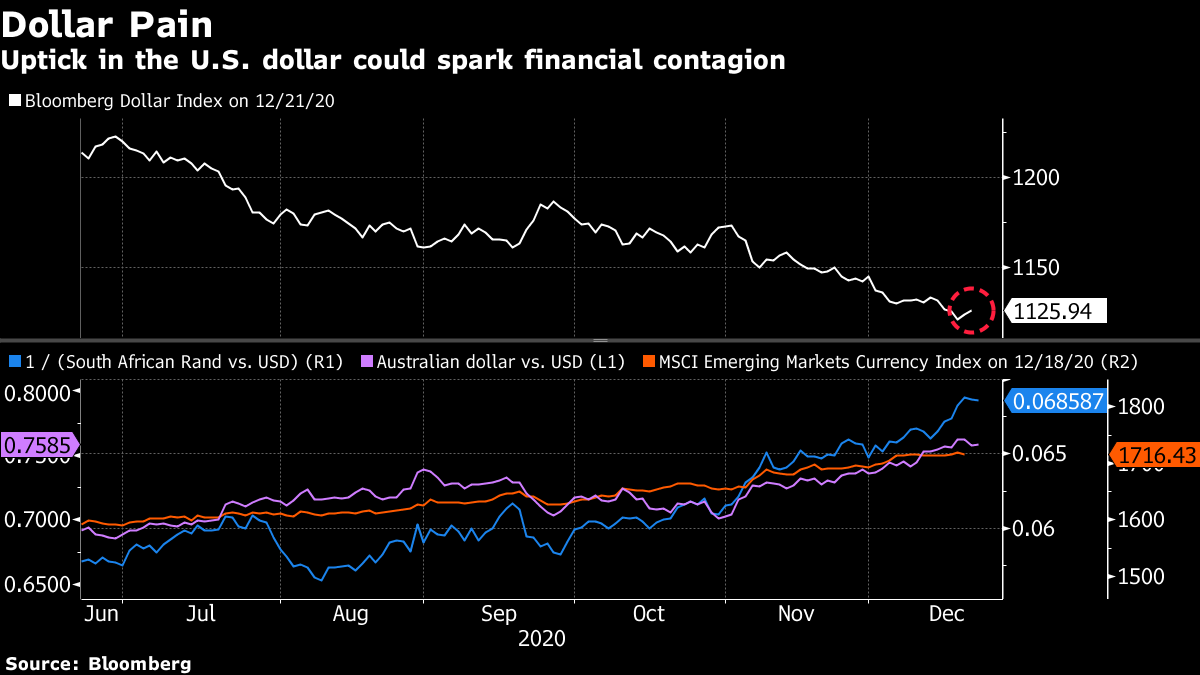 Investors are reaching for the dollar given its safe-haven status. But the greenback is also getting a boost as vaccine bets in currency markets are unwound, as Ben Emons at Medley Global Advisors points out. “The biggest risk to markets is a sudden surge in the dollar because [of] the retreat from currencies that have outperformed on the premise of a faster reopening on the back of the vaccine,” he says. All this is happening at a sensitive time given that the end of the year is typically when liquidity is more strained and balance sheets more limited. In other words there’s a risk that 2020 ends similarly to how it began: with virus contagion morphing into unpredictable financial contagion.