It's jobs day, Trump to focus on a smooth transition, and some good news on vaccines.

Economists are expecting a sharp slowdown in December job growth in the U.S., with more than a quarter of those surveyed by Bloomberg predicting a negative print when the data is published at 8:30 a.m. Eastern Time. There is little expectation of a sustained improvement in the employment situation until vaccines become widely available. On Wednesday ADP data showed a decline in private payrolls in December and yesterday's initial jobless claims number remained elevated.

President Donald Trump said he would turn his focus toward the transition to the incoming Biden administration in a video message published last night. His remarks, which were a notable departure in tone from his statements since the election, came amid a wave of resignations from White House officials. With less than two weeks left in his presidency, Democrat leaders are pushing for his removal from office either through the 25th Amendment or by another impeachment trial. Senator Mitt Romney of Utah suggested there is too little time for either process, saying "I think we have to hold our breath."

This 15-acre ocean-to-lake estate stands alone in all of the Palm Beaches for its beauty, privacy, amenities and sheer scale. Offering a remarkable combination of 1,200± feet of dune-lined beach on the Atlantic with 1,300± feet of frontage on Lake Worth.
2000SouthOcean.com

The Pfizer Inc. and BioNTech SE Covid-19 vaccine may protect against the new fast-spreading variants that have emerged in the U.K. and South Africa, according to a study. Beyond that, there is little good news about the pandemic outlook. Deaths in the U.S. are likely to maintain a near-record pace through the month, with fatalities expected to surpass 400,000 around Jan. 20. New York and New Jersey reported record daily cases yesterday. The European Union secured an extra 300 million doses of the Pfizer vaccine as governments in the region introduce even tighter lockdown measures.

Stocks are pushing higher again today as investors await the payrolls report that could strengthen the case for fresh stimulus. Overnight the MSCI Asia Pacific Index gained 1.7% while Japan's Topix index closed 1.6% higher. In Europe, the Stoxx 600 Index had added 0.5% by 5:50 a.m. with cyclical stocks the best performers. S&P 500 futures pointed to a small rise at the open, the 10-year Treasury yield was at 1.081%, oil was above $51 a barrel and gold dropped.

Wall Street veteran Byron Wien sees the 10-year Treasury yield getting to 2% this year. And Nomura's experts reckon turbo-charged quant funds could sweep it higher from 1.10%.

But the macro case for sharply higher yields risks straying into a couple of the bond market's hotly disputed territories.

The first: Supply will push yields higher. The calls for higher yields are premised on more-generous government spending under a united Democratic Congress, which implies more debt issuance. As we've seen over the past decade, however — and especially since March — more issuance doesn't equate to higher interest rates.

HSBC's Steven Major reminded us this week he's ready to die on this hill. He was so withering about that notion in his latest commentary that we hesitate to bring it up:

"We think the 'supply matters' view is based on nothing more than intuition. People feel more comfortable when they can frame their views around something that they think they know. It's an approach that regularly fails."

The second battle-cry: A pickup in inflation will drive yields higher. Major's not impressed by this one, either. The Fed's average inflation targeting regime means it won't respond until the rate holds above 2% for some time, and then only if it's accompanied by a labor-market recovery. Indeed, HSBC reckons that inflation and the bond market will "decouple" under the Fed's new approach, with modest increases being absorbed by a decline in real yields.

"The focus on the monthly inflation data ignores what really matters, which is the rate of unemployment." 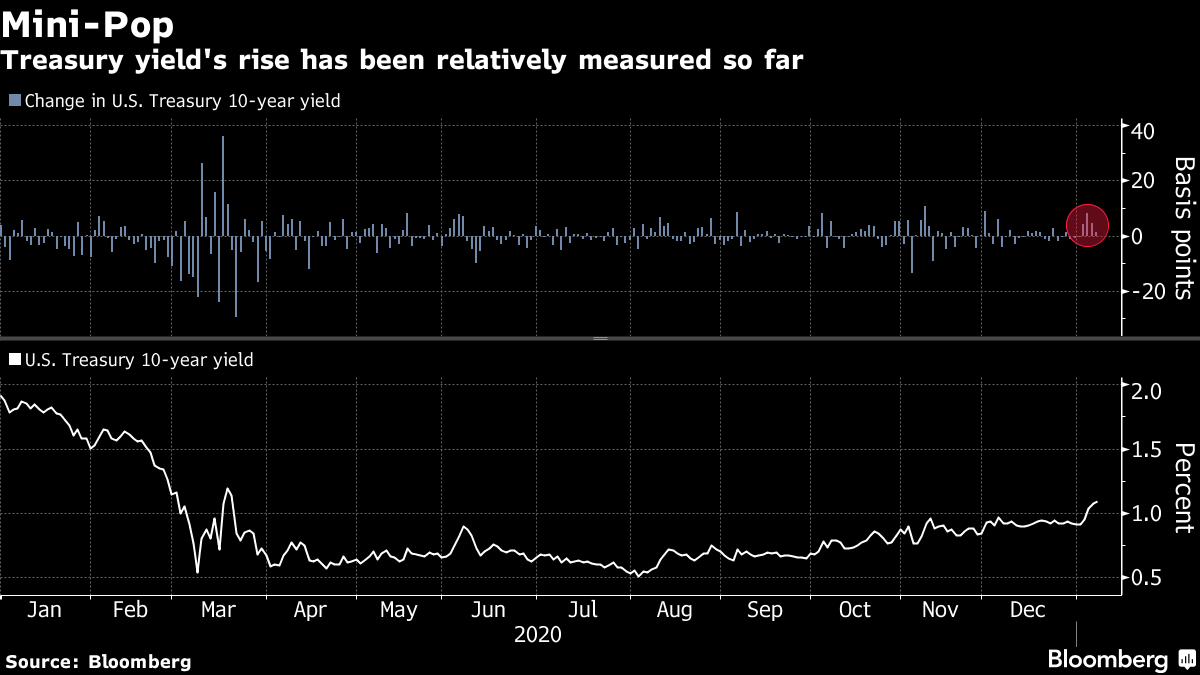 So the stronger case behind the recent rise in yields is that increased fiscal aid, and a likely infrastructure package, can support employment and spur demand. That's the kind of recovery we didn't get in the aftermath of the 2008 crisis because the austerity mavens in Congress snapped the purse shut after the 2009 $787 billion package, leaving the Fed in charge of stimulus.

This time should be different if Democrats unite around a generous spending commitment. Goldman Sachs has adjusted its growth forecasts for an additional $750 billion in aid. Their economists now see the U.S. economy growing 6.4% this year, versus 5.9% before the Georgia results.

There hasn't yet been a rush of strategists revising their yield forecasts — Bloomberg's mid-December survey pitched the 10-year at 1.21% by year end. Even as it climbs above 1%, the benchmark global yield still has a way to go to breach its March high of 1.27%, let alone where it began the year at 1.9%.

For its part, HSBC declares it's sticking with a bold call for 0.75% at the end of 2021 and 2022. "For a bearish view on Treasuries to be right, the Fed effectively has to indicate higher rates ahead of its stated forward guidance."