Good morning. The House is demanding the 25th be invoked, governments continue to struggle to contain Covid-19 and post-Brexit talks are set to start. Here’s what’s moving markets.

The House voted to demand U.S. Vice-President Mike Pence acts to remove President Donald Trump from office by using the 25th Amendment, a largely symbolic move ahead of a vote on Wednesday to impeach the president. Pence said he won't invoke the 25th, saying the nation needs to heal following last week's mob attack on the U.S. Capitol. Trump, commenting ahead of a trip to tour the border wall with Mexico, said the House's attempts to impeach him for inciting an insurrection were "absolutely ridiculous" and rejected any responsibility for the deadly storming. Here's a guide to what impeachment in Trump's final days in office would look like, with the focus less on removing him from office and more on stopping him running again in 2024.

German Chancellor Angela Merkel warned Germany may need to prolong its lockdown restrictions amid nervousness that the new strain of Covid-19 found in the U.K. will pose a significant challenge to the country's health service. This has already been the case in Ireland, where hospitals are under pressure. In the U.S., officials have urged states to widen access to vaccines to ward off criticism of the country's immunization campaign and amid ominous predictions about a rise in virus deaths. And a data breach at the European Medicines Agency last year resulted in hackers posting confidential documents on Covid-19 medicines online.

The U.K. will start talks with the European Union this week on post-Brexit financial services cooperation, with the two having agreed to broker a memorandum of understanding on the issue by March and London financiers keeping the faith that access will return. There were ominous signs from a trading venue run by UBS, which has seen nearly half its European equities trading move to rivals in Amsterdam and Paris. For Europe, analysts expect the region's economy will shrink again at the start of the year and France's finance minister said the government's growth forecast for 2021 will be tough to achieve.

Canada's Alimentation Couche-Tard, owner of the Circle K chain, said it has started "exploratory discussions" over a combination with French grocer Carrefour. A deal would bring together Couche-Tard's large portfolio of convenience stores and gas stations with Carrefour's supermarkets in Europe and Latin America. It marks another leg in a steady flow of overseas suitors for European companies so far in 2021, which has already included interest in private jet base operator Signature Aviation and gambling firm Entain. London's IPO market is also off to its best start since 2008, bolstered by a bounce back for U.K. stocks.

The U.S. dollar extended losses and Treasury yields retreated on Wednesday, with Asian stocks set for another record high and stock-futures in both the U.S. and Europe fluctuating. Euro-area industrial production data tops the economic calendar and the earnings line-up is led by online takeout delivery platform Just Eat Takeaway and online fashion retailer Asos. Also watch for reaction to pre-released guidance from Danish wind farm operator Orsted, one of the big winners in 2020. And note that Bitcoin has resumed declines, fueling further doubt in the crypto boom.

Muted moves in the broader equity benchmarks might suggest a subdued week for stocks but underneath the surface the speculative fervor is showing no signs of slowing down. As my colleagues including Elena Popina noted Tuesday, six microcap stocks selling for less than $1 a share made up almost a fifth of overall U.S. volume, according to data compiled by Themis Trading. Dabbling in so-called penny stocks is a sure fire sign of retail investor involvement and for the moment it's a winning trade. On average, Russell 3000 stocks with price tags below $2 a share have surged almost 13% so far in 2021. Those with share prices below $5 are up close to 10%. That’s more than three times the gain experienced by stocks with share prices above $100. On Tuesday, half a billion shares of one low-priced stock — pet-medicine maker Zomedica — changed hands before noon, with turnover on track for another record after more than 1 billion shares traded on Monday. The stock has more than tripled in three days after being mentioned in online forums. More evidence of a retail frenzy reminiscent of the dotcom bubble that can only end badly. 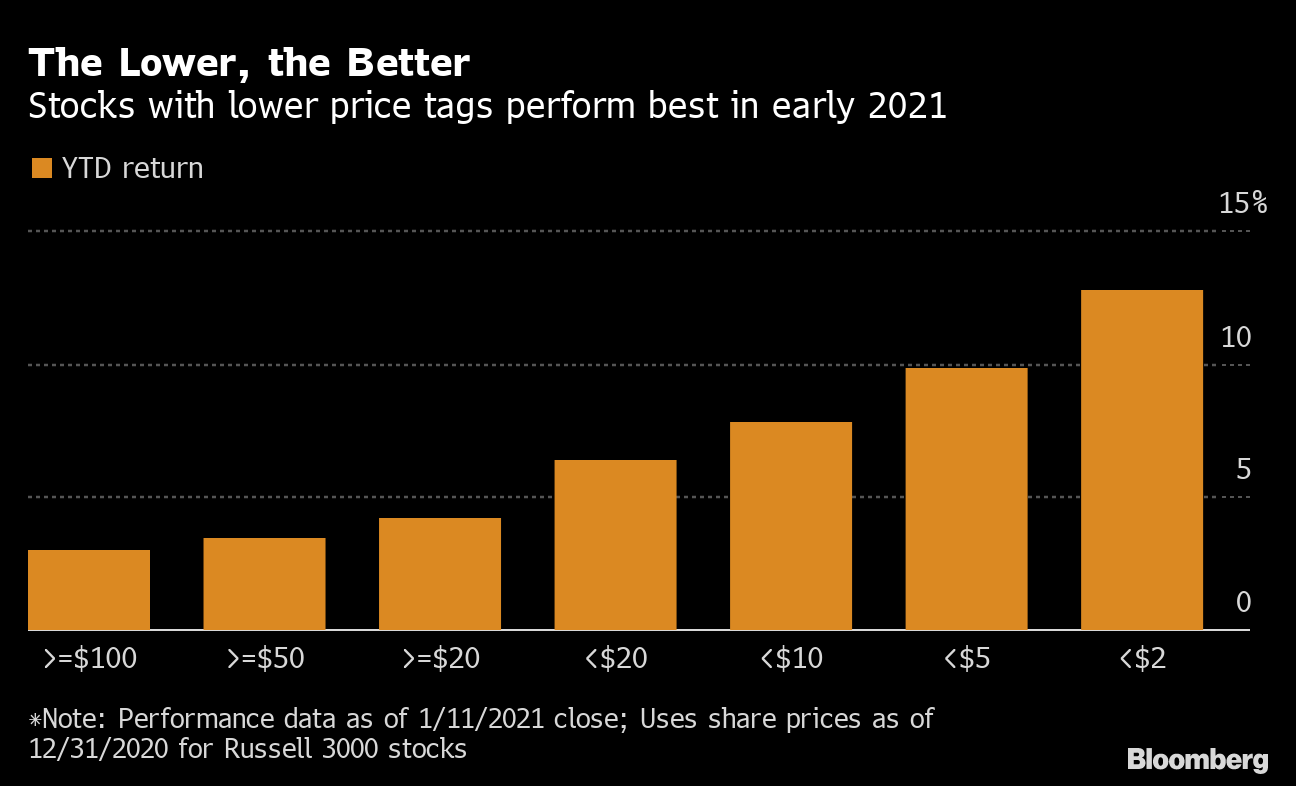