Joe Biden becomes the 46th president of the United States Wednesday, vowing to knit the nation back together. Aside from his stimulus plan, which has already met with Republican resistance, the 78-year-old Democrat is also focused on immigration, where he'll propose a shortened pathway to citizenship for undocumented migrants. Elsewhere, there were signs that the new administration would continue with some hard-line policies toward China. Here's a reminder of Biden's other key pledges and the challenges they'll face. Today's scaled-down inauguration in Washington has a star-studded line-up, including singers Lady Gaga and John Legend, and actor Tom Hanks.

Italian Prime Minister Giuseppe Conte scraped through a confidence vote in the country's Senate, giving him a shot at consolidating power in the days ahead. He’ll need more votes in the future for an outright majority that's required to pass certain key legislation, and may add support today as a group of Senators has indicated they'll be ready to give him their backing, Bloomberg reports. The news is a relief for investors concerned that politics would send Italy into an election campaign just as the pandemic rages.

Netflix surpassed 200 million subscribers for the first time during a best-ever year that's allowed it to generate enough cash to stop relying on debt to fuel expansion. The stock jumped 12% in after-hours trading as success of titles like "The Queen's Gambit" and “Bridgerton” saw its customer additions exceed Wall Street estimates, albeit with growth slowing from the now distant first lockdown days of "Tiger King." The company is also considering stock buybacks, something it hasn’t done in about a decade.

Stock markets are in the early stages of a bull run, according to Goldman Sachs, which reckons the recent valuations-led rally is typical of the start of a new economic cycle. The rebound in equities is “almost identical” to the recovery from the trough of the financial crisis in 2009, which was followed by a temporary drop in share prices, the strategists say. But readers old enough to remember those days may not need to worry: Goldman says this time's different, as there's no structural concern from the pandemic. European futures are little changed this morning.

Speculation in the U.S. stock market is back in nosebleed territory. After a brief lull around the end-of-year holidays, the 20-day moving average of total call option volume — a gauge of bullish bets on stocks — has returned to record levels. The share of total volume on the New York Stock Exchange which can be attributed to retail investor call option purchases has now hit 9%, an all-time high, according to calculations from Sundial Capital Research founder Jason Goepfert. Market participants expect retail volumes to surge again once additional $1,400 stimulus cheques are approved, just as they did when the U.S. government sent people $600 earlier this month. While a broadening of the investor base in any country should be welcomed, so as many people as possible have exposure to growth assets, this is not that. It is high-risk speculation plain and simple. That it comes as global equity benchmarks are trading at high valuations and struggling to make much traction in recent weeks should be a warning. As Goepfert puts it, “when traders press so hard, the market has a very consistent tendency to press back in the opposite direction.'' 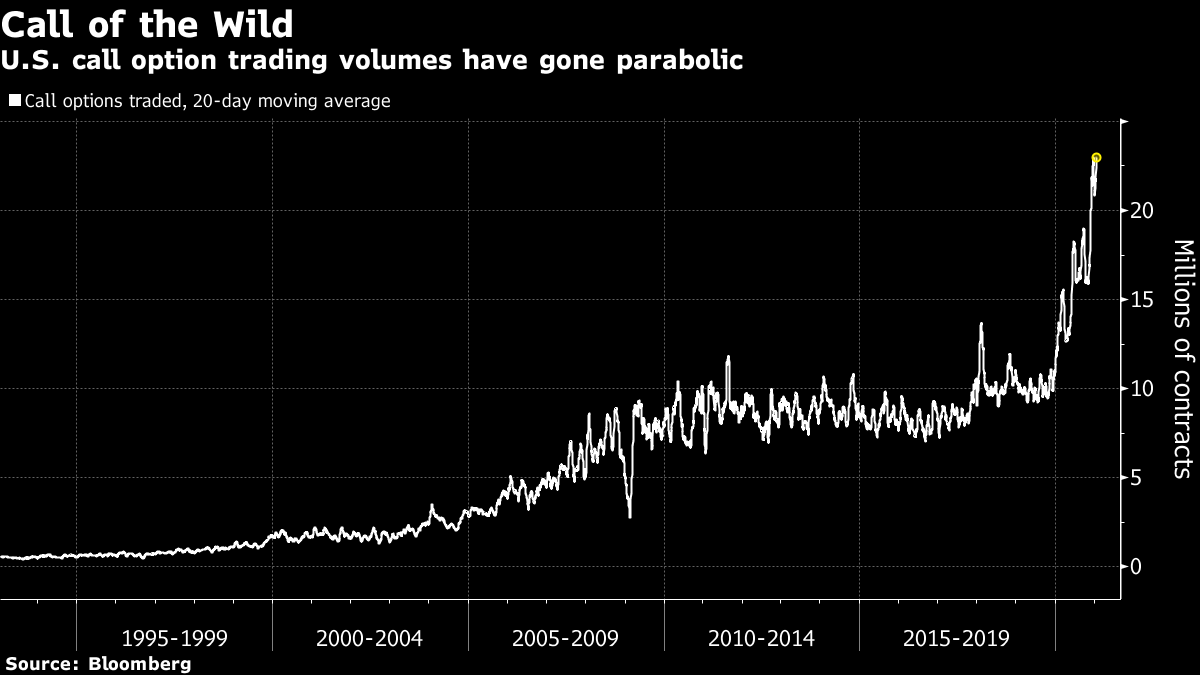