China imposed sanctions on former Secretary of State Michael Pompeo and other Trump administration officials just as Joe Biden was being inaugurated as president. China also urged cooperation with Biden’s administration and said it hoped new U.S. officials would make their own judgments on Beijing's control in Xinjiang. Although Biden and his team are unlikely to match the harsh rhetoric leveled by Pompeo recently, they have indicated they aren’t ready to ease tensions as much as China’s leaders would want. Meanwhile, here's how Biden's inauguration speech went down before he quickly moved to rejoin the Paris Climate Agreement, and this was Trump's final farewell.

Asian stocks looked primed to follow their U.S. peers higher as optimism that recent federal spending will revive growth and bolster corporate earnings pushed the S&P 500 to a record high. The dollar weakened. Futures in Hong Kong, Japan and Australia rose after the tech-heavy Nasdaq 100 Index jumped more than 2% and the S&P 500 posted its best first-day reaction to a presidential inauguration since at least 1937. Treasuries were little changed. Elsewhere, oil pared a rally late in the trading session as concerns over lackluster consumption clouded optimism. Gold and copper climbed.

Is your portfolio prepared if trade tariffs between China and US are rolled back? Tariff removal would boost global trade and the economy. The reduced uncertainty could shift investors’ interest from developed to emerging market assets. Be ready for the reset in global relations.

Investors in mainland China are showing unprecedented interest in Hong Kong stocks, powering the city’s fastest rally for a new year in more than three decades. Mainland traders have bought a net $27 billion worth of Hong Kong shares in January alone, nearing a third of what they purchased in all of last year. Keyword searches and references for “Hong Kong stocks” on Tuesday reached 6.3 million on WeChat, China’s most popular instant-messaging tool, seven times the amount at the end of December, according to app data. Applications for new accounts jumped 50% with some brokerages.

China’s crackdown on its largest technology companies has raised fears that the industry could be paralyzed, but some think antitrust rules will create more space for startups to grow. “Previously we had witnessed venture capitalists dropping a deal just because of concerns that the tech giants may one day step into the same area in which the startup operates,” said Zhou Xiang, a managing director at China Renaissance Group, who oversees its early-stage investments. China has experienced a tech boom, led by Alibaba and Tencent — worth roughly $1.6 trillion combined — but the era of expansion hit a snag when Beijing went after Alibaba co-founder Jack Ma. After several months' speculation as to his whereabouts, Ma made a brief appearance recently and investors breathed a $58 billion sigh of relief.

Technology companies are set to make up a bigger share of IPOs in Australia in 2021 as investor thirst for the sector appears unquenchable, according to dealmakers. Out of the A$5.4 billion ($4.2 billion) raised in Australian company debuts last year, technology businesses accounted for A$1.3 billion. At 24% of the year’s total, it is tech’s biggest share of annual IPO volume in at least a decade. Communications and financials, categories that include tech-adjacent firms such as broadband providers and online lenders, made up another A$1.5 billion. The shift fits in with a broader global trend, which has seen valuations pop.

One of the big secrets of the corporate bond world is that price can be a matter of opinion as much as fact. While the price of Apple stock is a single observable entity that you can find by looking on an exchange, the price of Apple bonds is far more opaque. For a start, there are dozens of different maturities and types, many of which might not trade that frequently. Bond investors have a tendency to buy up the debt and then hold onto it for a long time. And you can't just look up a common, centralized price for a bond. Despite years of attempts to make the bond market more transparent, most debt trading doesn't take place on an exchange, like stocks.

All of this means that bond investors have to get creative when it comes to valuing what's in their portfolio. It also means a bond held by one fund could be worth something very different at another. A new paper from Morningstar shows the extent of subjectivity when it comes to bond pricing, and provides a hint as to when and why it becomes problematic.

Using new data required by the U.S. securities regulator (N-PORT filings), Morningstar finds that there can be quite a lot of disagreement about what a bond's worth between the mutual funds that hold them. There's certainly enough disagreement to be meaningful for returns, with CCC-rated corporate bonds showing a price range of 1.5%. When interest rates and returns are low, a range like that can be the difference between positive and negative performance. 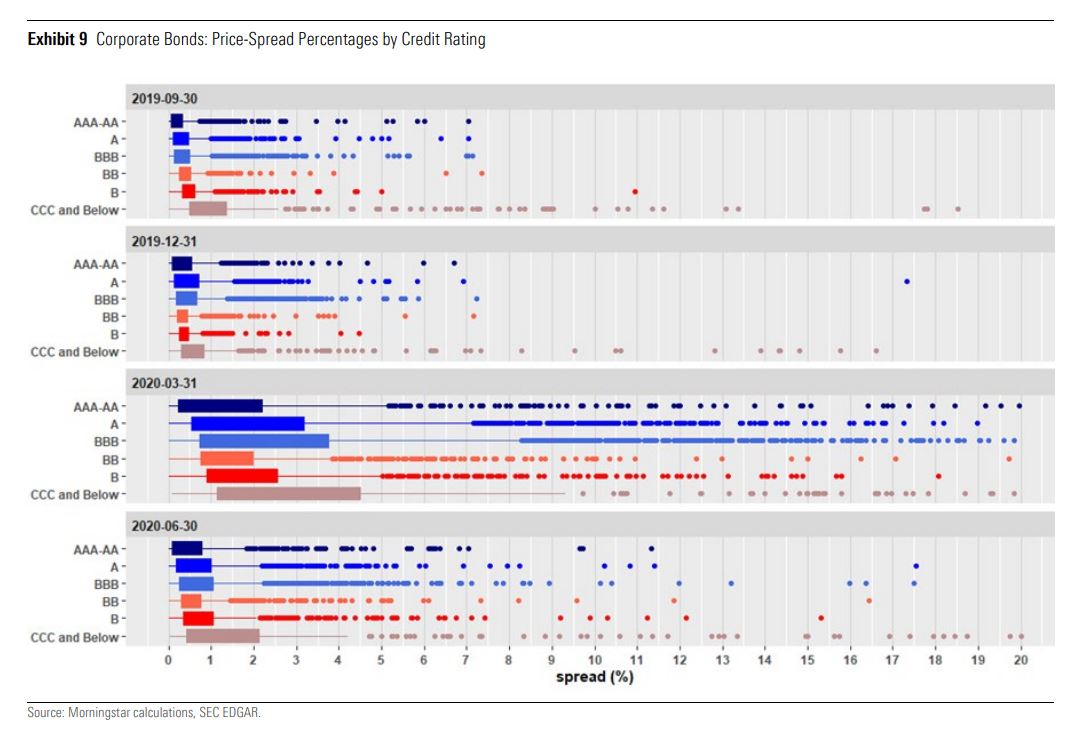 What's really interesting in all this, however, is just how much larger these pricing discrepancies can grow in times of stress. Morningstar compares price dispersion in September 2019 and March 2020 — the worst of the big market sell-off — to show just how uncertain things got. "By the end of March 2020, huge swaths of corporate debt were being priced all over the map from one firm to another, with large groups of bonds showing price-spread percentages in ranges of between four and nine percentage points and still numerous outliers pricing even wider than that," it concluded.