Biden's Covid warning, lockdowns could last until the summer, and it's PMI day.

President Joe Biden warned that the U.S. could see 100,000 deaths from the pandemic in the next month, and asked the nation to assume a "wartime" footing as he pressed Congress for more aid. The president's top economic advisor Brian Deese plans to meet a bipartisan group of lawmakers in the coming days to discuss the stimulus plan as Republican resistance to the $1.9 trillion package seems to be hardening. Dr. Anthony Fauci is back leading the country's response to the pandemic after he was sidelined by the previous administration.

Hopes that activity can return to normal in the hardest-hit economies are becoming increasingly distant despite the progress being made on vaccinations. U.K. Prime Minister Boris Johnson signaled that the current lockdown in the country could last until the summer while officials there have suggested paying people who test positive for the virus to stay at home. German Chancellor Angela Merkel said it would be late September before everyone who wants to get vaccinated can get a shot. Anger is rising across Europe as the supply of Pfizer vaccines slows. In the U.S., President Biden will sign executive actions today that will boost food assistance for impoverished Americans

This 15-acre ocean-to-lake estate stands alone in all of the Palm Beaches for its beauty, privacy, amenities and sheer scale. Offering a remarkable combination of 1,200± feet of dune-lined beach on the Atlantic with 1,300± feet of frontage on Lake Worth.
2000SouthOcean.com

The damage being done to economic activity was laid clear in this morning's Purchasing Managers Index numbers from Europe, which clearly signaled a double-dip recession in the euro area. IHS Markit’s gauge of private-sector activity fell to 47.5 with the service sector continuing to lag, while manufacturing in Germany remained strong. Output in the U.K. fell at the quickest pace since May, with Brexit delays adding to the pandemic-driven slowdown. PMI data for the U.S. economy is published at 9:45 a.m. Eastern Time this morning.

All the warnings and weak data are not falling on deaf investor ears, with markets around the world losing ground. Overnight the MSCI Asia Pacific Index slipped 0.7% while Japan's Topix index closed 0.2% lower. In Europe the Stoxx 600 Index had dropped 1% by 5:50 a.m. with every industry sector in the red. S&P 500 futures pointed to a loss at the open, the 10-year Treasury yield was at 1.096%, oil slid and gold dropped.

U.S. PMIs are at 9:45 a.m. and December existing home sales are at 10:00 a.m. Crude oil inventory data is at 11:00 a.m. The Senate may hold confirmation votes on Secretary of State nominee Antony Blinken and Treasury secretary nominee Janet Yellen today. The Baker Hughes rig count is at 1:00 p.m. and Schlumberger NV is among the companies reporting earnings.

Not so long ago investment-grade debt was the darling of the fixed income world. It was a haven from the issuers most at risk as the pandemic raged, with dedicated Fed support facilities, and it still offered some yield.

Now, the central bank backstop is gone, and with spreads at three-year lows, high-grade may be a tougher sell. Investors are fretting about such things as leverage and an inflation surprise with historic levels of duration risk in the benchmark indexes.

But shifts are afoot — one notable rotation seems to be occurring into sectors that took the brunt of the pandemic's assault. The recovery trade that's arisen from optimism about vaccines and their distribution has driven record weekly inflows into the iShares U.S. Fallen Angels USD Bond ETF (ticker FALN). 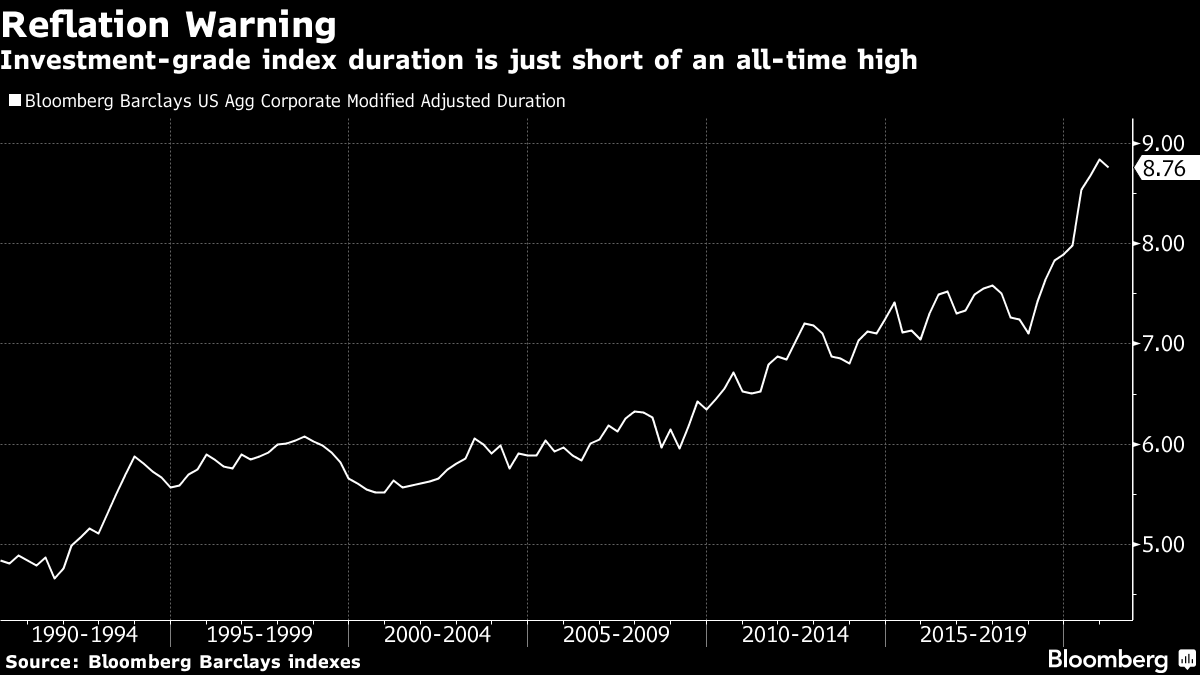 The bigger move, dictated by concerns about rising yields and possibly slightly less support from the central bank, appears to be into leveraged loans. Risky loans took in their largest weekly hoard of cash since March 2017 earlier this month, according to Refinitiv Lipper mutual fund data. That comes after a year when investors pulled money from the funds in all but 12 weeks, reports Jack Pitcher.

The appeal of a floating interest rate in a scenario of improving economic growth is clear. The current yield on senior loans is comparable with the high yield market, says State Street's Bartolini, but investors can probably capture more price appreciation on loans. Rallies in high yield have pushed the average price of the bonds above par, while senior loans are still trading below. Moreover, they're typically higher in the capital structure, and so can offer higher recovery rates if all goes pear-shaped.

Moreover, it's clear which asset class is on top so far this year, with our Veronica Graff reporting that BlackRock and DoubleLine are among the U.S. heavyweights taking the plunge.