China's power scares savers out of Hong Kong. The world economy is going to see a tougher start to 2021 than expected. The U.S. urges China to engage with Taiwan.

The world economy is facing a tougher start to 2021 than expected as coronavirus infections surge and it takes time to roll out vaccinations.
While global growth is still on course to rebound quickly from the recession of last year at some point, it may take longer to ignite and not be as healthy as previously forecast. Double-dip recessions are now expected in Japan, the euro area and the U.K. as restrictions to curb the virus’s spread are enforced, while Record cases in the U.S. are dragging on retail spending and hiring. Only China has managed a V-shaped recovery after containing the disease early, but even there consumers remain wary with Beijing partly locked down.

China's growing power is scaring ordinary savers out of Hong Kong, with Bank of America estimating outflows could reach $36 billion this year as residents assess their options. A proliferation of discussions have sprung up on social networks offering advice on creating offshore accounts, moving money into other assets, or opening accounts at U.S. banks, which are perceived to be less pliable to the demands of Chinese authorities, following the introduction of the sweeping national security law imposed on the city last year. For some, the last straw came when banks including British lender HSBC froze the accounts of former lawmaker Ted Hui and family members after he went into exile in the U.K. with his family. Other signs that the pace of cash leaving the city is picking up include a rise in withdrawals from the city's pension fund and soaring interest in U.K. property by Hongkongers.

Is your portfolio prepared if trade tariffs between China and US are rolled back? Tariff removal would boost global trade and the economy. The reduced uncertainty could shift investors’ interest from developed to emerging market assets. Be ready for the reset in global relations.

Asian stocks looked set for a muted start to the week as traders awaited a Federal Reserve policy meeting and a flurry of earnings reports against the backdrop of the worsening pandemic. The dollar was steady after Friday’s gains. Equity futures signaled modest climbs in Australia and Hong Kong and were little changed in Japan. The S&P 500 Index slipped Friday for the first day in four amid concern that a new coronavirus strain may be deadlier than earlier variants. Treasury yields retreated.

Australia’s Treasurer Josh Frydenberg said it’s “inevitable” that Google and other tech behemoths will have to eventually pay for using media content, responding to the internet giant’s threat to disable its search engine in the country if it’s forced to pay local publishers for news. Google said Friday that a proposed law, intended to compensate publishers for the value their stories generate for the company, is “unworkable,” opposing the requirement it pay media companies for displaying snippets of articles in search results.

The U.S. State Department urged China to engage in dialogue with Taiwan’s democratically elected representatives and cease putting military, diplomatic and economic pressure on the island. The U.S. statement on Saturday came as Taiwan said a fleet of 13 Chinese military planes, including eight H-6K bombers, entered its air defense identification zone, in an apparent stepping up of Beijing’s almost constant military incursions around the Taiwan Strait.

Are you a financial professional who has sat on the sidelines while retail traders with Robinhood accounts use options on meme stocks to make more than your annual bonus in the space of a month? Then perhaps you are suffering from "Robinhood envy". It is, I believe, a growing phenomenon. Admittedly, I don't have much evidence of this other than a few anecdotes, but it's hard to imagine that finance professionals aren't looking at recent retail trading successes with at least some degree of envy. One (now deleted) post by an anonymous finance professional on the notorious "wallstreetbets" forum on Reddit was simply titled: "I Hate You All." The poster said he had studied finance in order to get a job in the industry, and now worked at a firm where short-term trading on personal accounts was restricted, meaning he couldn't participate in big gains on stocks like Plug Power. Meanwhile, the furor over Gamestop's rise is pitting the whole of wallstreetbets against the short-selling firm Citron Research in the ultimate battle of "flows before pros." 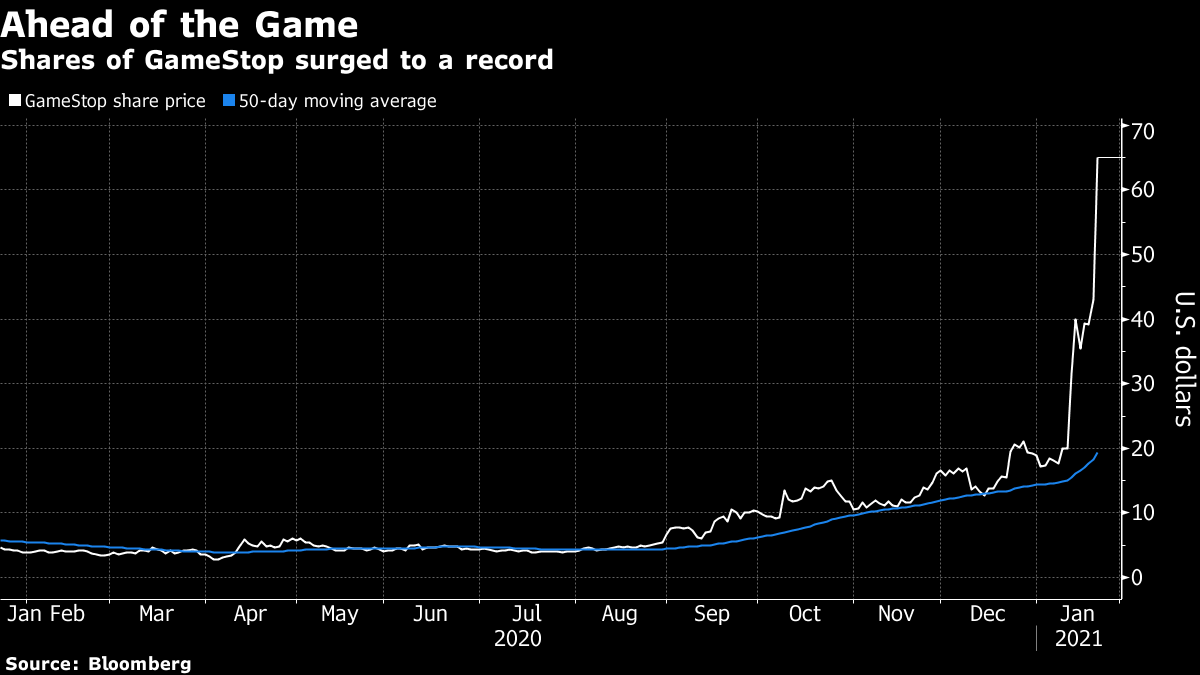 How professionals choose to approach the growing influence of the Robinhood crowd on markets is going to be a major theme going forward. These investors are creating short-squeezes, forcing shares up through options activity, and contributing to basic upward momentum in popular meme stocks that catch Reddit's collective imagination (and are often pumped on the platform). All of that is feeding through into markets, as Corey Hoffstein, Co-Founder & CIO of Newfound Research told my Odd Lots co-host Joe Weisenthal in an interview last week: "If you have these frothy situations where an individual security is not necessarily creating consistent gains but you're seeing something like a Gamestop or a Plug that is dramatically jumping within a one-month period, well, momentum investors if they're not careful are going to start picking up on those names. And they may be able to ride the wave of retail, if that is truly what's influencing it, but they also may ultimately end up being the bagholders as retail moves out of those names and into something else." There's a good chance that Wall Street might eventually be feeling Robinhood enmity, alongside envy, very soon.