Stop me if you've heard this one before, but stimulus negotiations look set for a long battle in the Senate. Majority Leader Chuck Schumer said yesterday that he is aiming to secure passage of the next round of Covid-19 relief by the middle of March, when jobless benefits from the last package run out. President Joe Biden said he is open to reshaping the $1.9 trillion proposal, adding that the process of reaching an agreement is just beginning. There is some progress being made elsewhere in the Senate, with Janet Yellen yesterday confirmed as Treasury Secretary. Senators will be sworn in as jurors in Donald Trump's impeachment trial later, but then pause on that issue to get through more confirmations to Biden's cabinet.

California and other large states are starting to loosen restrictions as new cases of the virus and hospitalizations decline in the U.S. It is a different story in Europe where German Chancellor Angela Merkel told party colleagues that the country's management of the pandemic has "slipped out of control" and that stricter curbs are needed. In the Netherlands there was another night of rioting against the government's imposition of a curfew, just weeks before a national election. The World Heath Organization warned that vaccine coverage won't reach a point that would stop transmission of the virus for the foreseeable future.

Meet the three new members of the
Invesco QQQ family.

Microsoft Corp. kicks off big-tech earnings season after the bell, with Bloomberg Intelligence suggesting that a drop in enterprise sales may have been offset by consumer gaming and PC demand. Starbucks Corp. results will be all about the outlook for 2021, with the focus for Johnson & Johnson firmly on the company's vaccine date. Earlier, UBS Group AG reported a very strong end to 2020 and announced it would buy back as much as 4 billion francs ($4.5 billion) of shares over the next three years.

Global equity investors remain cautious as Biden's stimulus plan gets bogged down in Washington and fears over the spread of mutations of the virus fan a risk-off mood. Overnight the MSCI Asia Pacific Index dropped 1.4% while Japan's Topix index closed 0.8% lower. In Europe, the Stoxx 600 Index had gained 0.6% by 5:50 a.m. Eastern Time, with financial services firms among the strongest performers after UBS results. S&P 500 futures pointed to a small drop at the open, the 10-year Treasury yield was at 1.045%, oil gained and gold slipped.

November U.S. house price data is at 9:00 a.m., with the latest consumer confidence and Richmond Fed Manufacturing numbers at 10:00 a.m. It's a busy day in the Senate with the vote on Antony Blinken as secretary of state, a panel hearing on Gina Raimondo's nomination as Commerce Secretary and the swearing in of senators for the impeachment trial. Bloomberg holds a virtual year ahead event.

This past summer, the current retail trading boom really started gathering steam. And there were some wild moments, like when a mini-bubble formed in shares of bankrupt Hertz, and David Portnoy of Barstool Sports started selecting stocks by picking Scrabble letters out of a bag. But now in retrospect, all that stuff seems pretty small fry compared to the action these days, where traders on Reddit engineered one of the biggest short-squeezes of all time, driving shares of Gamestop from single digits late last year to a high of nearly $160 yesterday. What seemed like an earthquake last summer turned out to be just a tremor. 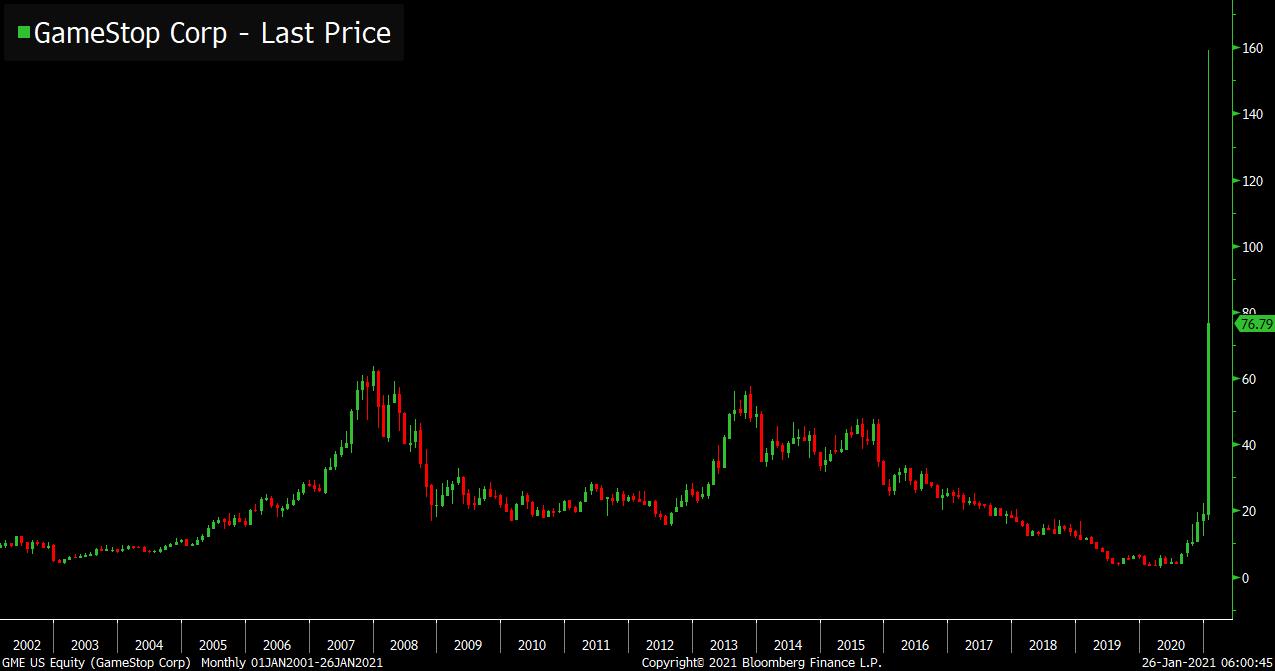 If you go back to the dotcom bubble, and you think about what stocks were really representative of it all, you probably think of Qualcomm or Cisco or Yahoo, or perhaps you remember TheGlobe.com. But some of the initial plays were a lot weirder. Back in the spring of 1998, traders went nuts for shares of K-Tel, the purveyor of corny compilation CDs that were sold via infomercials on TV. But when they started selling CDs online, the stock went bonkers, doubling many times over. Still, what seemed like irrational exuberance wasn't anywhere close to the top of the market mania. It was barely even the beginning. K-Tel was like Hertz or the Scrabble bag.

It's basically impossible to know in real time where you are in the cycle or how big things are going to get. Things can always get more nuts.

Joe Weisenthal is an Editor at Bloomberg.