GameStop mania, Fed decision day, and earnings due for Apple, Facebook and Tesla.

This morning newsletter usually covers the weighty issues of the day, covering market trends and events. But, let's be honest, pretty much the only thing people are talking about is the amazing rally in GameStop Corp. shares. The stock, which started the year under $20, was north of $300 in premarket trading this morning after luminaries like Elon Musk and Anthony Scaramucci weighed in on the phenomenal rally. While GameStop is the most obvious example, the surge is part of a wider move where an army of retail traders crowd into the most shorted stocks on Wall Street. The size of the moves are already leaving a mark on some hedge fund titans as the short squeeze upends anyone basing their investments on something that looked like fundamental analysis.

The Federal Open Market Committee is all but certain to keep interest rates near zero and the pace of asset purchases unchanged in its decision today at 2:00 p.m. Eastern Time. Despite hopes for a strong recovery, disappointing economic data of late, including on the labor market, means Fed Chair Jerome Powell is likely to restate that now is "not the time" to be discussing an exit from stimulus. His press conference will start at 2:30 pm. There is no update to FOMC forecasts today.

Meet the three new members of the
Invesco QQQ family.

Microsoft Corp. got big-tech earnings season off to a strong start yesterday, reporting sales that were well ahead of analyst expectations. After the bell today Apple Inc.'s iPhone sales will be in focus when the company reports. For Tesla Inc., which has seen its share price rise almost 8-fold in the last year, revenue from the sale of regulatory credits will be of interest, as well as sales and orders figures. Facebook Inc. may see a jump in revenue, Bloomberg Intelligence said.

Equity markets are lower as investors digest a wave of earnings reports as they wait for the latest Fed decision. Overnight, the MSCI Asia Pacific Index slipped 0.3% while Japan's Topix index closed 0.7% higher. In Europe, the Stoxx 600 Index had dropped 0.5% by 5:50 a.m. with energy stocks the biggest losers. S&P 500 futures pointed to some weakness at the open, the 10-year Treasury yield was at 1.043%, oil rose and gold was lower.

U.S. December durable goods orders are at 8:30 a.m., with crude oil inventories at 10:30 a.m. President Joe Biden is due to speak on climate change and will sign a series of executive actions to combat global warming. Virtual Davos and Bloomberg's The Year Ahead event continue. As well as all the tech earnings today, we also get updates from many more companies including Boeing Co., Abbott Laboratories, Stryker Corp. and Las Vegas Sands Corp.

If you spend anytime looking at tech Twitter these days, you see a lot of VCs and other folks talking about macro and monetary policy. The reason is that a lot of them are long Bitcoin, and they think hyperinflation and money-printing narratives are good for pumping their bags. Usually they start off with a chart like this of the Fed balance sheet, and they talk about how the amount of dollars in the economy has almost doubled since the spring or something like that. 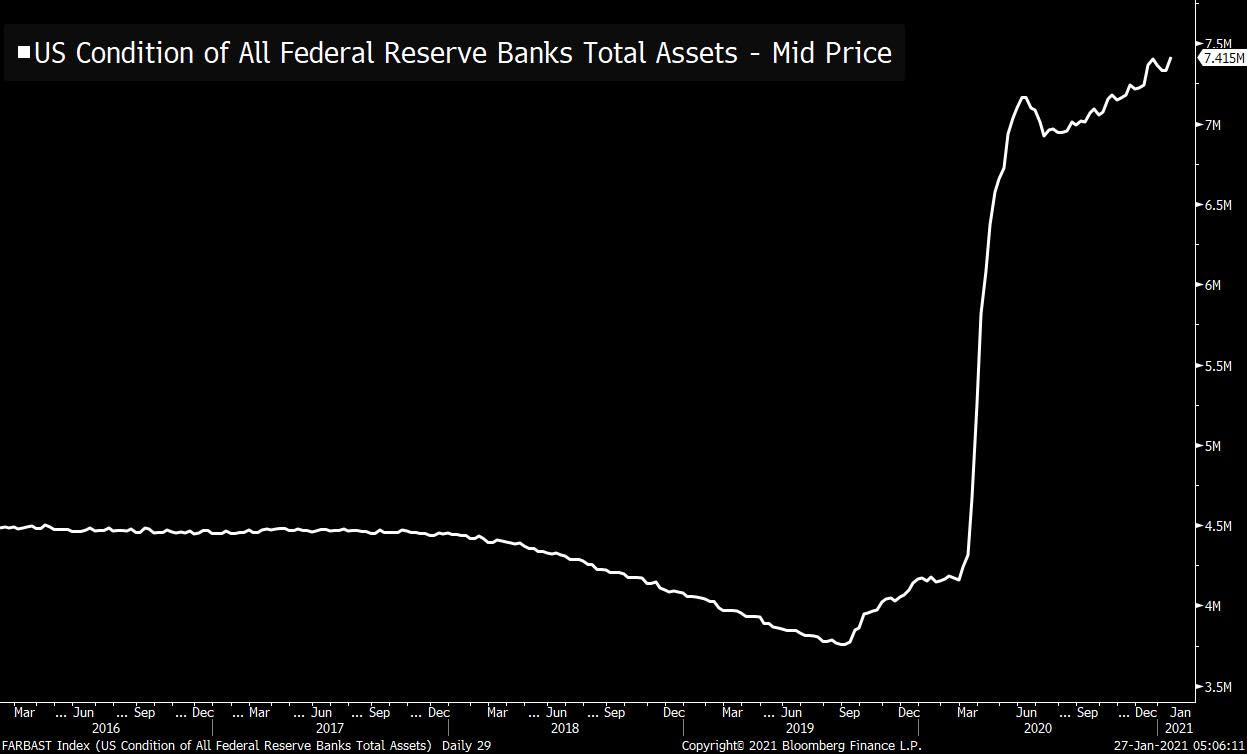 I'm going to explain quickly why this isn't money printing, and why it fundamentally misunderstands how money comes into being.

When the Fed buys a Treasury, what it's really doing is replacing one kind of government liability (maybe a 10-year Treasury) with another kind of government liability (an overnight reserve held at the Fed). If you're a bank that sold a Treasury to the Fed, you've given a long-term asset that yields something for a short-term asset that yields something else. No new money has entered the system. The government doesn't have any less debt. All that's happened is that the consolidated government balance sheet (the Treasury and Fed combined) has shortened the term structure of its liabilities. After the Fed buys a Treasury there's less long-term debt outstanding and more short-term debt outstanding. That's it. (Now an interesting side note, people often talk about how the government should take advantage of low interest rates by extending the duration of government liabilities by, say, issuing a 50-year or 100-year bond. But note that what's described is the exact opposite).

Okay, now as to how the government does get more cash into the economy, the one way that happens is through fiscal policy. More spending. And indeed, the government has been spending a lot of money lately, running up a big deficit, to replace the lost income that the private sector is experiencing during the pandemic. Net outlays soared over the last year, particularly in the spring when the first stimulus hit. 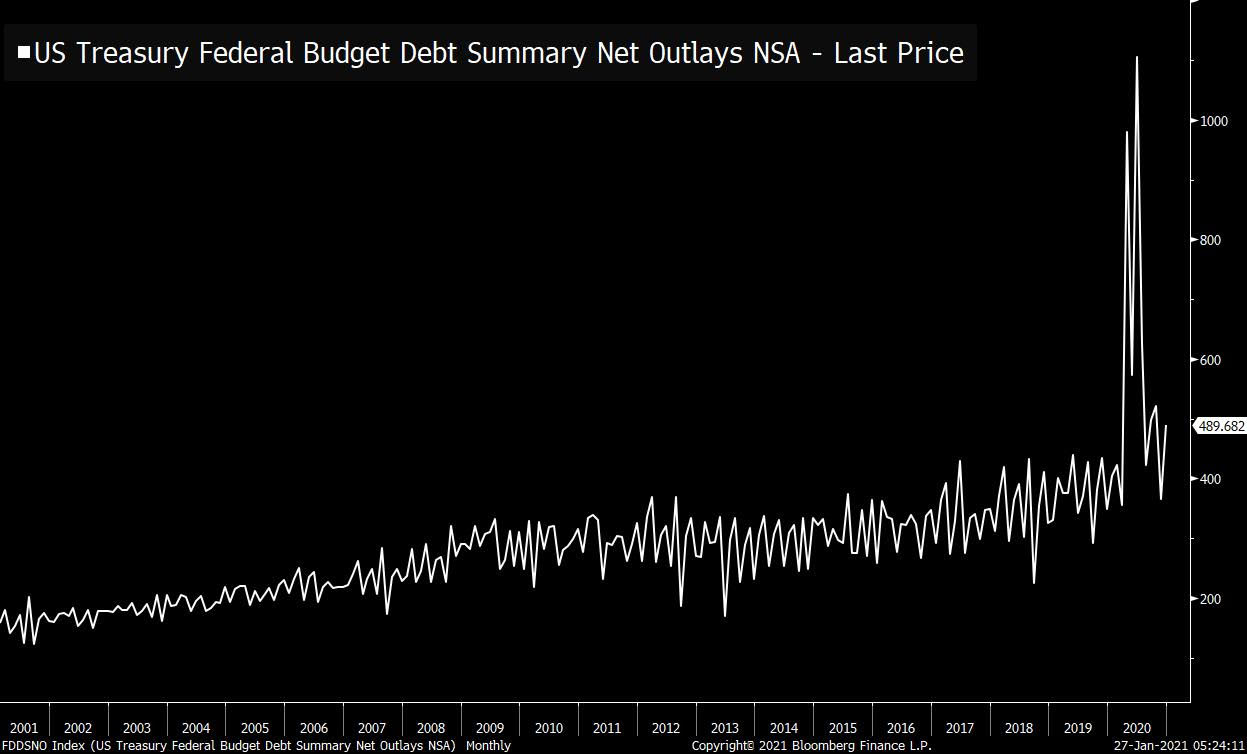 This money goes straight to the private sector, and when you combine this spending with the surge in household savings — either because people were stuck in their homes or since they were nervous about the economy — we saw a huge rise in the amount of money people have in their checking accounts and other savings vehicles. Okay, so the Fed doesn't print money really, but the Treasury does when it spends. (It also destroys money when it collects taxes.)

But all this is missing a big chunk of the story, which is that for the most part, money is created by the private sector. Tech people, having learned about monetary policy from watching the Bitcoin issuance schedule think that all dollars originally start at the government level, and then filter out into the economy. But this isn't it at all. The private sector, particularly banks, creates new money all the time. There's a great Bank of England paper from 2014 explaining money creation in the modern economy, but the basic gist is that when you take out a loan from a bank — say, to buy a house — that money doesn't come from somewhere. It's created anew right there on the spot. If the bank gives you a loan for $1 million, no banker has to go looking for $1 million to lend. Instead your bank account just has $1 million added to it, and voila, you have $1 million more in spending power. As the famous economist John Kenneth Galbraith put it: "the process by which banks create money is so simple that the mind is repelled."

Now of course this fluctuates over time. In 2005, when the housing market was red hot, and anyone could get a mortgage, new money was being created at a rapid clip. In 2009, it was just the opposite. It was hard to get loan. This is always being adjusted. And importantly, the Fed's policy rate is only a marginal factor in the propensity of new money to be created. Private sector animal spirits, the ups and downs of the cycle, are what determine the pace at which private actors create new money. If the economy is booming and bankers feel that borrowers are highly likely to repay them, they'll create new money. In a slump, they'll create less. Tech folks love talking about "DeFi" these days. Well… the dollar is Decentralized Finance.

Okay, so bottom line. The Fed doesn't really print money. The Treasury does print money by spending, and it destroys money by taxing. And then the real action is done by private actors, whose impulses are determined by the broader economic cycle.

Also I lied. One point about GameStop: It's interesting that while certain parts of the markets are going totally bonkers, at the index level, things are pretty ho hum. The S&P 500 is up about 2.5% so far this year. A rapid start, but not insane. Without GameStop and a couple other Reddit favs, things might look kind of sleepy.