Amid the coordinated short-squeeze being deployed by Reddit’s army of day traders, Wall Street is scanning for which of the market’s most-hated shares could be targeted next. GameStop — which entered the week with 139% of its available shares borrowed and sold short, according to data from S3 Partners — served as a proof of concept. The video-game retailer has soared nearly 700% in five days, sending its market value above $23 billion, prompting even Michael Burry to call its rally "insane." Now, analysts are casting an eye toward others. The list of potential targets includes Vir Biotechnology and SunPower.

Asian stocks looked set to slide Thursday as their U.S. peers extended losses in after-hours trading on disappointing earnings from tech giants and concerns about valuations. The dollar jumped the most since September and Treasuries climbed. Futures pointed lower in Japan, Hong Kong and Australia. Earlier, the U.S. benchmark fell 2.6% — the most since October — after Federal Reserve officials left their main interest rate unchanged. Ten-year Treasury yields fell to just over 1%.

Federal Reserve Chair Jerome Powell made clear the U.S. central bank was nowhere near exiting massive support for the economy during the ongoing coronavirus pandemic, as officials left their benchmark interest rate unchanged near zero and flagged a moderating U.S. recovery. The central bank’s policy-making body repeated it would maintain its bond-buying program at the current pace of $120 billion of purchases per month until “substantial further progress” toward its employment and inflation goals has been made. Separately, Secretary Janet Yellen and the Biden administration’s economic team announced they are watching stock-market activity around heavily shorted companies.

Chinese President Xi Jinping has said Hong Kong should be governed by “patriots” in comments that come just weeks after more than 50 opposition politicians and activists were arrested using the city’s new Beijing-drafted national security law. China’s leader made the statement in a video conference with Hong Kong Chief Executive Carrie Lam, according to state broadcaster CCTV. In recent months, Chinese authorities have tried to purge pro-democracy activists from Hong Kong’s Legislative Council, fueling condemnation by foreign governments including the U.S. Meanwhile a new pro-Beijing party in Hong Kong could be a window into China's future plans for the city.

SoftBank plans on selling more bonds in 2021 after announcing its first issuance in more than a year. The pace of issuance will keep up with maturities, Chief Financial Officer Yoshimitsu Goto told Bloomberg News. Last year’s hiatus, the first since the 2008 financial crisis, had to do with the low amounts of debt coming due, he said. The company plans to sell about 100 billion yen ($961 million) of hybrid notes, compared to 1 trillion yen it raised in domestic bond markets in 2019, with the sale set to be priced this month. SoftBank’s creditworthiness came under scrutiny in March, when Moody’s Investors Service downgraded it two notches, leading the company to accuse the firm of “bias.”

Here's something about me: I like going to movie theaters. When I was growing up, my dad and I used to go a lot. I remember watching "Jurassic Park," pushing down into my seat as the Tyrannosaurus rex came dangerously close to gobbling up two kids roughly the same age as me. And I remember watching the re-release of "Star Wars," gasping in surprise at the big reveal on Luke Skywalker's paternity. My dad still pronounces "theater" as "thee-eight-ER" — the only remnant of his erstwhile Texas twang.

I realize this is a weird thing to bring up in a paragraph about markets and finance, but I can't help thinking about it as we continue to ponder the impact of retail traders on the broader capital markets. GameStop is still soaring and the short sellers are capitulating. On r/wallstreetbets, traders are already posting about new targets. This is where movie theaters come in.

Shares of AMC Entertainment Holdings, which operates the largest chain of movie theaters in the world, are exploding higher and are now up 839% since the start of this year. On r/wallstreetbets, the talk has been of making it the next GME. AMC, having been on the verge of bankruptcy until very recently, is not a particularly enticing investment candidate at the moment. Its business model has been destroyed by the coronavirus crisis in the short-term, and its long-term outlook is threatened by home-streaming. But it's not necessarily the business model that redditors are looking at. 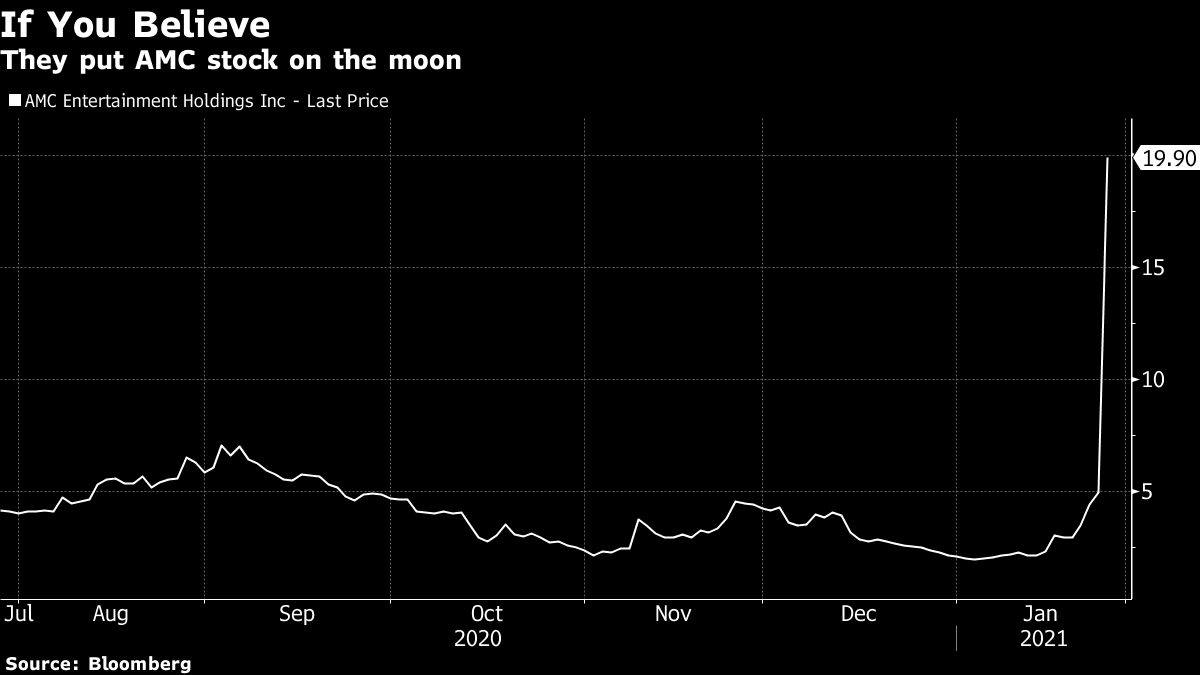 Instead, r/wallstreetbets is focused on structural quirks that might make it susceptible to a short squeeze and a narrative that goes something like this: "We like AMC and might be able to make it go higher. Let's buy AMC."

It's tempting to dismiss what's going on as an irrelevant "gamifaction" of stock trading. But it's harder to make that case when it's impacting the allocation of actual capital. On Monday, AMC declared that bankruptcy was "off the table" thanks in large part to a rally in its share price courtesy of retail traders. Prices for its bonds have also been rising. Moves that started on r/wallstreetbets are now rippling across AMC's entire capital structure.

In other words, fake internet memes can have an impact on real money. LARPing in markets can lead to changes in the real world. George Soros — who the majority of WallStreetBets fans would probably hate to see referenced alongside their rebellious subreddit — called this the "reflexivity" of markets. As Soros puts it: "Distorted views can influence the situation to which they relate because false views lead to inappropriate actions." This reflexivity principle is largely at odds with traditional economic theory, which prides itself on reaching equilibrium and a unity of perspective. Eventually market participants, being a rational bunch, are supposed to converge around a single viewpoint.

The saga of WallStreetBets shows that this is not necessarily true. And it's especially not necessarily true in a social media-fueled environment where cognitive dissonance and tribal dynamics dominate. A traditionally rational investor might look at a GameStop or AMC and see a foundering bricks-and-mortar business at odds with economic reality. An investor fueled by feelings and community spirit might see a stock with the potential to rocket higher.

Ultimately, the feelings-fueled investor can have an impact on the company by throwing a lifeline to a business otherwise doomed to failure. GameStop and AMC probably aren't going to become permanent billion-dollar enterprises, but they might get a chance that they wouldn't have had otherwise. As a movie fan, part of me feels that's not the worst thing in the world.