GameStop plummeted, snapping a dizzying six-day rally and wiping out nearly $11 billion in market value after brokerages choked off demand for the stock by curbing trading on the apps used by the company’s zealous fan base. The stock plunged 44% after Robinhood, Interactive Brokers and others took steps to curtail activity in several high-flying stocks, including GameStop and AMC. It's causing anger with users, has drawn at least two customer lawsuits, and also prompted lawmakers to criticize the decisions. And this just in: Robinhood Markets has drawn down some of its credit lines with banks, according to people with knowledge of the matter.

Asian stocks looked set to follow their U.S. peers higher Friday as moves to limit retail trader speculation led to gains in stocks that hedge funds had been forced to abandon. The dollar retreated. Futures were more than 1% higher in Japan, Hong Kong and Australia. The S&P 500 rebounded from its worse loss since October. Treasuries retreated, pushing the yield on 10-year notes up to 1.05%. Oil declined the most in nearly a week with the spread of new Covid-19 variants and tighter lockdown measures weighing on nascent hopes of a demand recovery.

Hong Kong is on a difficult road to recovery after two years of unprecedented economic weakness triggered by massive political upheaval and a global pandemic. Official data due Friday is set to show a record 6% contraction in GDP in 2020. Hong Kong hasn’t posted back-to-back annual contractions in data going back to at least 1962. And the biggest contraction in GDP over that period was a 5.9% decline in 1998, when the city was affected by both the Asian Financial Crisis and the handover to China. Last year, unemployment surged to a 16-year high of 6.6%.

Among the 1,200-odd firms listed in mainland China that issued preliminary results so far in January, 91% have said earnings rose last year, with communication and health care firms predicting the biggest profit growth. That may offer relief to investors, after the CSI 300 Index, which tracks the biggest firms in China, dropped 4.4% the past three days from a 13-year high, raising worries that a near-term peak has been reached. That lost momentum came as the central bank withdraws liquidity and a central bank adviser warned of asset bubbles. Meanwhile, Alibaba is set to face investors while Beijing cracks down on Jack Ma’s Empire.

Bridgewater Associates founder Ray Dalio said Bitcoin is “one hell of an invention” and he’s considering cryptocurrencies as investments for new funds offering clients protection against the debasement of fiat money. Still, he said it was challenging to put a value on digital assets, and that there were risks like hacking and potential for government restrictions to control money supply. Other hedge fund managers, including Tudor Investment’s Paul Tudor Jones and Alan Howard, the founder of Brevan Howard Asset Management, are more bullish, and last week, BlackRock, the world’s largest asset manager, took its first step into cryptocurrencies.

Last year I wrote that Bitcoin was the perfect post-modern asset. Its value isn't tied to any single real thing, which means it's driven by narrative and networking. Because those narratives aren't limited by reality, there tend to be a lot of them. This abundance of Bitcoin "stories" means it can appeal to more and more people. You want to make money? Bitcoin is going to the moon. You want to protect your portfolio from inflation? Bitcoin is digital gold. You want to avoid government scrutiny? Bitcoin is (supposed to be) anonymous and decentralized.

There's a story for everyone, and that makes it attractive to a larger number of people who then pour their money into it and give it value through sheer force of belief. So the value is in the stories, and the ability of those stories to mobilize a network of people willing to buy.

By now it should be clear that what happened in GameStop had a few things in common with Bitcoin. For a start, it too became increasingly detached from reality as the stock price soared. My colleague Matt Levine described it as "a pure token for YOLO gambling." Another colleague, Lorcan Roche-Kelly, put it like this: "GameStop is not a company, it is literally nothing more than a number on a screen. Any other analysis misses the point." 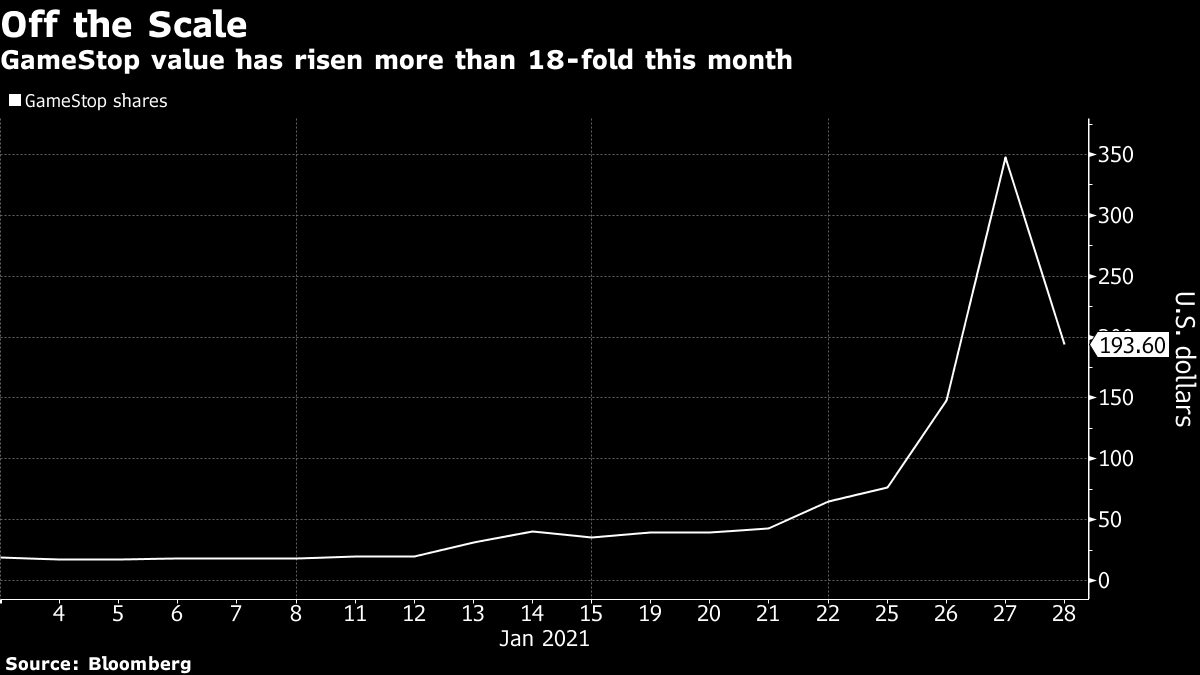 Because GameStop was a ship unmoored from the land of reality, it too could contain multitudes. It was clearly a way of making money. The r/wallstreetbets user credited with starting the whole thing had call options that were worth millions of dollars. It was a way to voice your anger at the financial establishment. One post that topped the subreddit was all about seeking revenge on hedge funds for the 2008 financial crisis. It was also just for lulz; a way to while away the hours when there's not much else to do.

Those stories sucked a whole bunch of people into the GameStop trade. And because so much of it played out on social networks like Reddit and TikTok, people could be mobilized quickly and efficiently.

Louis-Vincent Gave over at Gavekal Research made this point this week: "Bitcoin may be a trail-blazer, not because it is set to become a new means of exchange (it isn’t), but for what Bitcoin tells us about the potential volatility of assets in our hyper-networked, modern world," he wrote. "This ability to organize market 'flash mobs' is as much of a threat to financial systems as the real thing is to retail stores. This effect means that out of nowhere, price discovery for an asset can suddenly become irrelevant. Prices can go anywhere: trillons or zero."

What can investment professionals do in the face of this dynamic? Not very much. The professionals' story of GameStop — that it's a massively over-valued brick-and-mortar retailer in a world of e-commerce — is specific and rather boring. It lacks imagination. Telling people that GameStop has a trailing 12-month EPS of negative $2.52 doesn't get anyone excited. So any finance professionals looking to offset the influence of WallStreetBets will have to look at different ways to create their own "network" effect.

That might be one of the reasons, Gave notes, we saw Point72 and Citadel band together to provide a credit line for Melvin Capital, a hedge fund that had a big short position in GameStop and incurred heavy losses as a result. It's not every day that hedge funds help each other out, and they rarely do so unless it's out of self-interest.

In a hyper-connected and (post-)modern world, the value of some financial assets might ultimately be determined by the strength of a narrative — or the size of your network.