Silver retail sites grind to a halt as Reddit army descends. China's recovery is undercut by the virus fight. How an ex-Google employee created a $61 billion business.

Silver spiked at the week’s open, with futures topping $29 an ounce, as the the Reddit-inspired frenzy that roiled stock markets last week spills over into commodities. The spike came after retail sites were overwhelmed with demand for bars and coins on Sunday. Outlets including Apmex, the Walmart of precious metals products in North America, said they were unable to process orders until Asian markets open because of unprecedented consumption. Meanwhile, discover how day-traders hurt hedge funds chained by risk models, while throwing new lifelines to struggling companies. And here's what billionaire Ken Griffin has to do with GameStop.

China’s efforts to control the recent resurgence of Covid-19 are undercutting a recovery which has been one of the bright spots in the global economy. The first official data for January showed economic activity expanded at a much slower pace compared to December, with the services sector markedly weaker. Activity usually slows ahead of the Lunar New Year holiday which begins next week, but curbs on travel this year to try and stop the spread of the coronavirus mean many people won’t be able to return to their hometowns. That will limit spending on travel, restaurants and gifts.

The dollar was steady and stocks were poised for a cautious start to the month as investors digested data showing Chinese manufacturing that missed forecasts. The Australian dollar slipped after Perth in Western Australia went into a five-day lockdown due to a coronavirus case. The New Zealand dollar was also lower in early Monday trading. Equity futures signaled a mixed start after the S&P 500 Index lost almost 2% on Friday. The yield on 10-year Treasuries ended last week around 1.07%.

India’s annual budget will be Prime Minister Narendra Modi’s chance to spur demand and investments in an economy cratered by the world’s second-biggest coronavirus outbreak. His government’s growth-centric plans will be outlined by Finance Minister Nirmala Sitharaman when she delivers the budget speech starting at 11 a.m. in New Delhi. She’s expected to set aside more money for health care and infrastructure development and partly pay for them by raising record amounts by selling stakes in state-run companies. These are the key numbers investors need to watch.

Japan’s decades-long love affair with status-symbol office towers is now fading, as the pandemic upends work styles and puts a strain on company finances. In a country where companies have long taken pride in owning their buildings, advertising agency Dentsu Group and logistics firm Nippon Express are now considering selling their Tokyo headquarters. Avex, an entertainment company, also plans to offload its head office in the Japanese capital.

One of the lasting legacies of the GameStop phenomenon might be the mingling of "investing" and "trading." Investing has traditionally been about finding a promising company capable of generating cash flows and dividends and then holding it for the long-term. Trading has tended to focus on short-term moves, often exploiting momentum to make a quick profit. One is based on fundamentals, the other on technicals. The novel thing about the GameStop drama is that it's both.

From the beginning, GameStop bulls like WallStreetBets poster DeepF*ckingValue and Rod Alzmann made a value case for the company predicated on a fundamental misunderstanding in the market of its business and its future potential. But they were also adamant that the hedge funds which had shorted the stock had got it wrong, noting the possibility that the stock could be forced further upwards if those funds had to buy shares to close out their shorts. In the latest episode of the Odd Lots podcast, Alzmann described this as an embedded option on the possibility of a short squeeze.

In January, GameStop transformed into the mother-of-all trades. Technical pressures — notably the long-awaited short squeeze and a gamma squeeze caused by call buying — combined to produce a gain of more than 2,000% at one point last week. 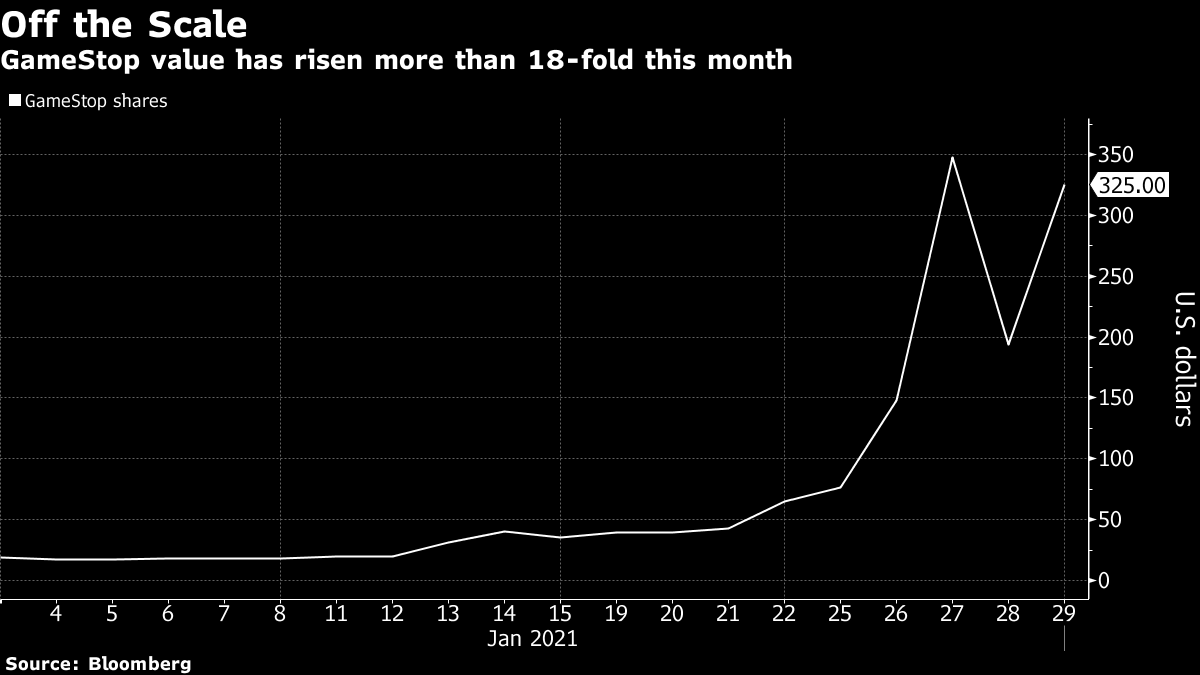 It's not enough to identify a company that might simply be undervalued. The "GameStop Strategy" has to come with the kind of technical factors that might make it susceptible to big moves — notably, high short-interest. That's why when you see talk of the GameStop Strategy going global, it typically involves ganging up on stocks that resonate with a large retail base, but that also have technicals that could lead to a sharp move upwards. It's why analysts are now screening stocks by short interest to identify potential new targets. In this brave new world, technicals might just be the new fundamentals.