The Reddit-driven frenzy in a few "meme stocks" abated on Tuesday, with the likes of video-game chain GameStop, cinema operator AMC Entertainment and retailer Express all sinking heavily and leaving some retail traders regretting chasing the rally. Silver prices have calmed too after a tumultuous few days, amid an increasing backlash on forums against the precious metal trade. The hedge funds the Reddit crowd was targeting, meanwhile, will live to fight another day. At least for now, it looks like a drama confined to the U.S. The calm in the storm provides an opportunity for markets to get back to regular concerns, like SPACs and cryptocurrencies, but volatility futures indicate the market expects price swings through the course of March, so there may be more to come yet.

Italy's search for a new government appeared to have run into roadblocks on Tuesday as coalition partners failed to settle differences over the return of Giuseppe Conte as prime minister. President Sergio Mattarella is now seeking to appoint a new head of state in order to avoid elections at a time when the country is contending with Covid-19. To that end, a familiar face may be about to return to the fray in the shape of former European Central Bank Governor Mario Draghi. He will meet with Mattarella on Wednesday and be asked to form a new government, a market-friendly move that sent the euro higher.

Jeff Bezos will cede the chief executive role at Amazon, having built the company into a dominant force in retail over the course of more than 25 years at the helm. He'll move to chairman and be replaced as CEO by Andy Jassy, the head of the group's cloud-computing unit, who had long been considered a potential successor. That news overshadowed blow-out fourth-quarter results for Amazon with guidance that also topped expectations. The other tech mega-cap stock to report, Google owner Alphabet, also blew past estimates thanks to heavy digital advertising spending over the holiday season.

The U.K.'s controversial decision to adopt an extended dosing interval for AstraZeneca's vaccine was given a boost by trial data from the University of Oxford, which showed 82% effectiveness with a three-month gap between the two shots. In France, where President Emmanuel Macron raised has raised doubts about the effectiveness of the shot for older patients, the country has limited the Astra treatment to people aged 65 and under, following the lead of Germany's medical authority. German Chancellor Angela Merkel, meanwhile, said it will look at Russia's Sputnik V vaccine as it, in line with other European countries, seeks to boost its sputtering vaccination program.

Stocks rose across most of Asia on Wednesday and both European and U.S. futures are trending higher following two sessions in the green. Oil prices also extended gains having closed at the highest level in more than a year, boosted by declines on U.S. and Chinese stockpiles. Measures of services sector activity will top the economic agenda for Europe, while a slew of large-cap earnings will arrive from miner Glencore, telecoms group Vodafone, and drugmakers Novo Nordisk and GlaxoSmithKline.

Now that the Reddit rumble is out of the way, it seems investors are getting back to focusing on the key market strategy of recent months: the reflation trade. Supportive U.S. economic data, expanding pandemic vaccination programs and signs of progress on President Joe Biden’s $1.9 trillion stimulus plan have rekindled enthusiasm for bets linked to higher prices and growth. Institute for Supply Management data released Monday not only showed that U.S. manufacturing remained robust in January but also that prices paid for raw materials rose to their highest since April 2011. That helped push U.S. 5-year breakeven rates — a gauge of inflation expectations — to an eight-year high. Despite a limited reaction in benchmark Treasuries, longer-dated bonds have come under more pressure, leading to a steepening in the yield curve. The spread between five and 30-year Treasuries has hit its steepest since 2016. Meanwhile, a shift to defensive names triggered by the retail trading frenzy has begun to reverse amid receding concerns that the speculative mania will trigger an extended selloff. A basket of cyclical stocks from Goldman Sachs Group Inc. has outperformed its defensive counterpart by over one percentage point so far this week, and remains in its relative uptrend. 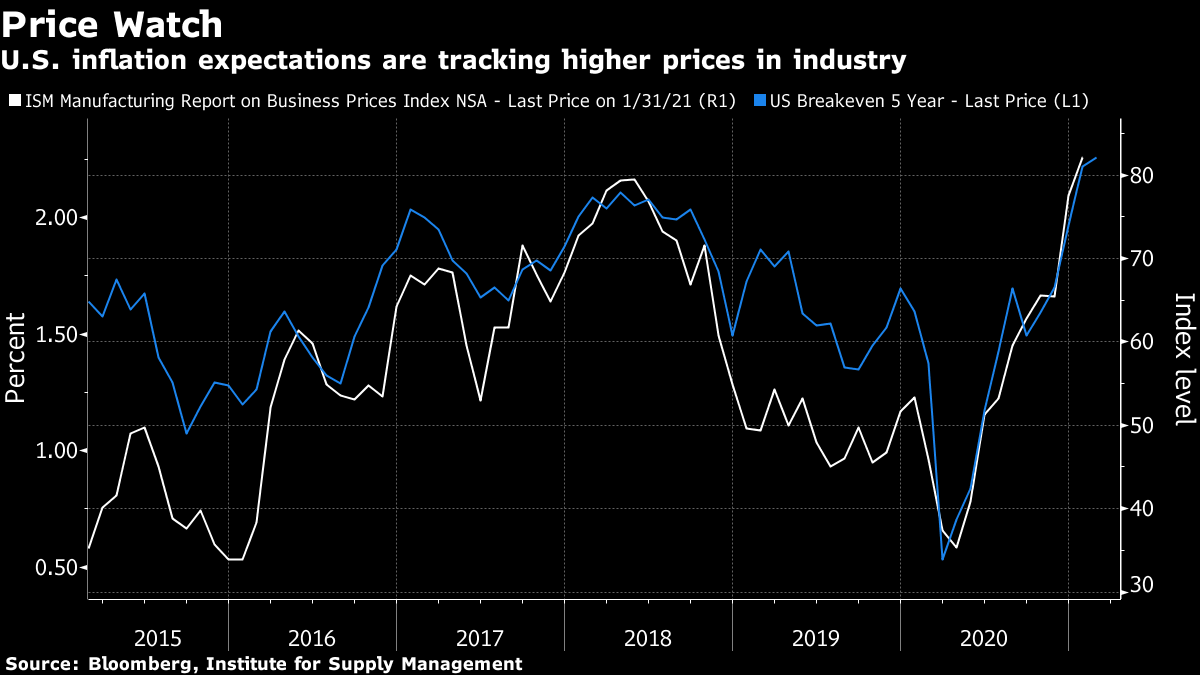