Mario Draghi, the former president of the European Central Bank, is coming out of retirement after he accepted the mandate to try to form a new government in Italy. Markets welcomed his appointment, with the euro, Italian bonds and the country's stock market all buoyed by the news. It's going to be a challenging task and Draghi will now have to sound out leaders of political parties in an attempt to form as broad a parliamentary majority as possible. Attention will turn to how successful he is in finding a coalition to govern a country contending with rising debt and the effects of the coronavirus pandemic on its economy.

The European Union and the U.K. have agreed to "work intensively" to settle differences over the Northern Ireland border amid attempts to cool down controversy which has threatened to reignite one of the most contentious parts of the Brexit deal. Earlier, U.K. Prime Minister Boris Johnson had threatened to suspend parts of the Brexit agreement relating to Northern Ireland as a dispute over the EU's threat to impose controls on the border escalated. Separately, the U.K. said that cross-border trade with the EU is nearly back to normal levels, in spite of concern that a mountain of post-Brexit paperwork is causing significant disruption for freight firms.

U.S. President Joe Biden is digging in his heels on stimulus checks, saying that while he would be open to tighter eligibility requirements, he will not back down on the $1,400 payment proposed in his aid package. His efforts to win approval for his relief package may be further complicated by scattered signs that the U.S. economy is picking up steam from a slowdown at the end of 2020, given Republican lawmakers are questioning whether stimulus of the size Biden has proposed is needed. In the Senate, leaders have reached a two-year power-sharing agreement which will allow the chamber to function fully after weeks of procedural limbo.

The University of Oxford will start a trial combining the Covid-19 vaccines from AstraZeneca and Pfizer, which may enable greater flexibility in the use of supplies worldwide. Switzerland has delayed approval for AstraZeneca's vaccine, saying it wants more data on its efficacy and taking a more cautious view than the European Union. Meanwhile, the U.K. says it has passed the peak of the Covid-19 pandemic as it hit a milestone of vaccinating 10 million people, albeit with a warning that should current restrictions be lifted too quickly, it would put enormous pressure on the National Health Service. The burden on hospitals in the U.S. is also easing somewhat owing to a reduction in coronavirus cases.

The rally in stocks this week looks set to ease on Thursday, with European and U.S. futures mixed and equities in Asia sliding. Oil prices extended gains, however, after OPEC and its allies pledged to keep rapidly clearing the surplus of crude created by the pandemic's impact on demand. The latest policy decision from the Bank of England will be announced, followed by U.S. jobless claims later in the European day. Earnings season is also ramping up, with numbers due from heavyweights like food giant Unilever, oil major Shell, Swiss pharma group Roche and German lender Deutsche Bank.

The currency cold war is mobilizing the euro bears. Expectations the common currency will weaken over the short-term are growing, among strategists and traders alike. One-month risk reversals for the euro-dollar — a gauge of demand for bullish call options versus bearish puts — have fallen to their lowest since June, according to data compiled by Bloomberg. The move comes amid concerns about the pace of the vaccine rollout in the region, disappointing economic data and a wave of comments from European Central Bank officials that have been interpreted by some as a verbal fusillade against the currency. The line up included Klaas Knot, Olli Rehn and Gabriel Makhlouf, who told Bloomberg TV last week that the central bank is ready to use all its instruments including interest-rate cuts if needed, reiterating a message relayed by President Christine Lagarde. The jawboning has helped push the euro down about 1.5% against the dollar already this year. Traders expect the weakness to continue. 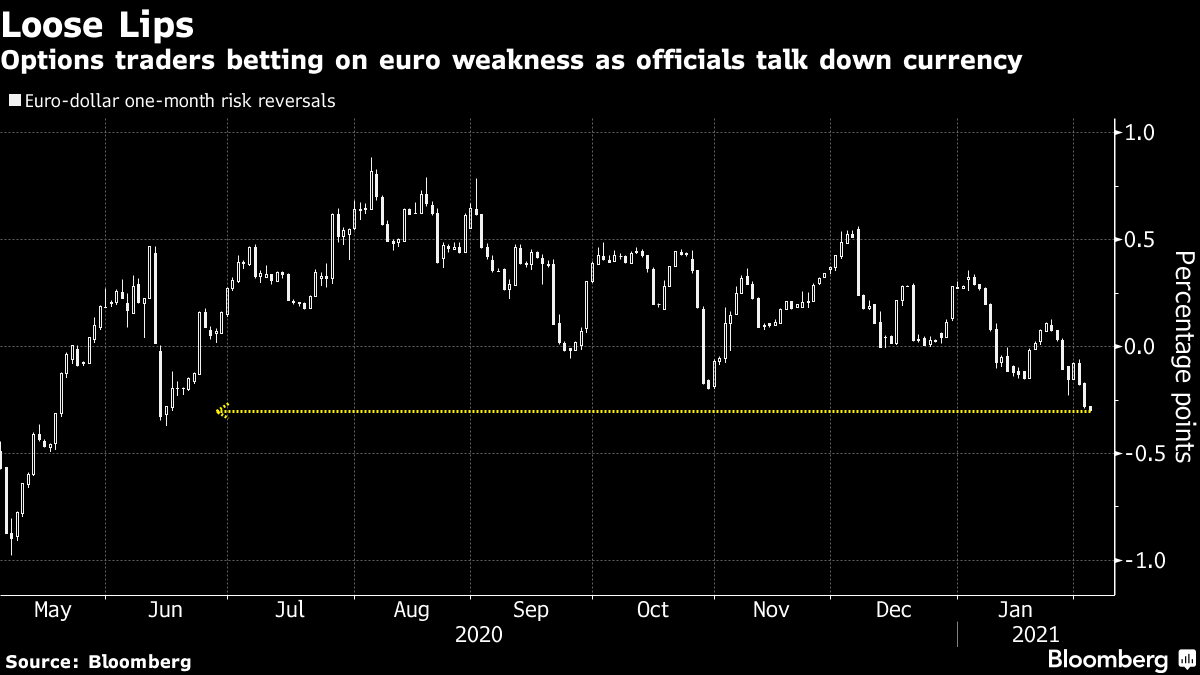 Protected: OP: Too Many on the Short Bus

OP: Too Many on the Short Bus