U.S. stocks hit record highs. Korea's ban on short selling may backfire. The pandemic will be over in 7.4 years.

A growing number of fund managers and traders are worried that South Korea’s pandemic-imposed ban on short-selling, the world’s longest-such restriction, has artificially propped up the country’s stock market rally. Korea, whose benchmark surged last year and is up 7.5% in 2021, this week bowed to retail investor pressure and extended the ban, but that could backfire. Indonesia will lift a ban this month, while countries including France, which restricted short-selling early last year, only kept restrictions for a few months.

Asian stocks looked set for gains after their U.S. peers climbed to a record on signs the labor market is healing. The S&P 500 closed up more than 1%, led by banks and tech shares, while the Russell 2000 Index of smaller companies climbed 2%. The dollar strengthened. Futures pointed higher in Japan and Australia. A widely watched segment of the Treasury yield curve steepened to levels last seen in 2015. Crude oil advanced and gold fell.

Cash is pouring into Hong Kong IPOs at a record pace, amid a growing willingness by Chinese investors to evade capital controls. While Hong Kong IPOs are technically off limits to investors from mainland China, workarounds exist and anecdotal evidence suggests their use has spiked in recent months as investors pile into hot new offerings from the likes of Kuaishou. At one Hong Kong brokerage, mainland customers have driven a 10-fold surge in new account openings this year. Still, the process is far from risk free.

When Will It End?

When will the pandemic end? The answer can be measured in vaccinations. Bloomberg has built the biggest database of Covid-19 shots given around the world, with more than 108 million doses administered worldwide. U.S. science officials such as Anthony Fauci have suggested it will take 70% to 85% coverage of the population for things to return to normal. By that measure, it will take the world as a whole 7.4 years at the current pace. But, some countries are making far more rapid progress than others. More than 8.5 billion doses of vaccine have been contracted by countries through more than 100 agreements tracked by Bloomberg.

GameStop capped another day of heavy losses, pushing its collapse past 80% this week as retail traders flocked to other corners of the stock market like biotech. The video-game retailer tumbled 42% on Thursday to $53.50, erasing nearly $30 billion in market value. GameStop shares have lost momentum even after news of a trio of executive hires, including the appointment of a chief technology officer. Meanwhile, demand shrunk for companies such as headphone maker Koss Corp. and apparel retailer Express Inc., which had also skyrocketed over recent weeks.

One of my favorite charts right now is the one below. It shows shares of Tesla versus Bitcoin and I bring it up because of this story in the Wall Street Journal about a hedge fund that made lots of money on the GameStop trade. Senvest Management LLC started looking at GameStop's business in early 2020 and began buying the stock in September. They sold soon after Elon Musk tweeted "GameStonk!" — roughly around GameStop's astronomical all-time high last week. As one of the Senvest managers put it: “Given what was going on, it was hard to imagine it getting crazier.” 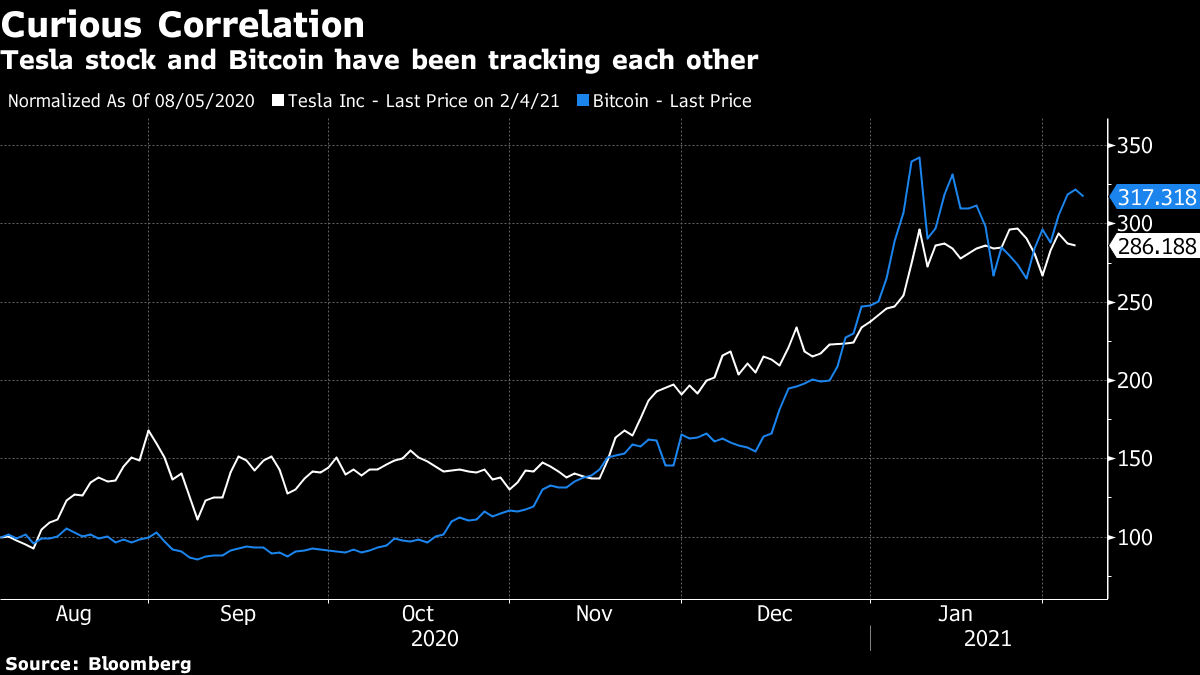 So back to the Tesla/Bitcoin chart. (There are other things that correlate to Tesla stock by the way, mostly other retail favorites like Ethereum and  lumber futures). I love spurious correlation as much as the next person, but what if it's not so spurious? What if, in the world of socially-networked swarm trading, Elon Musk tweeting marks the height of retail momentum? In that kind of world, one in which flows trump fundamentals, attention from Elon Musk's Twitter followers might mark some kind of upper bound on the theoretical limit of just how crazy things can get.