China’s army of tiny hedge funds are pulling further ahead of their better-known foreign competitors with outsized gains helping them attract more assets. The nearly 15,000 funds offered by Chinese managers returned 30% on average last year, with the best-performers surging 10-fold, according to Shenzhen PaiPaiWang Investment & Management Co. That dwarfs the average 12% gain for hedge funds globally. The out-performance is another impediment to global funds such as Bridgewater Associates and Two Sigma, which have struggled to make inroads into China’s 3.8 trillion yuan ($588 billion) hedge fund market since it was opened to foreign firms four years ago.

Stocks looked set for a muted start after climbing to a record high last week, with investors monitoring signs of progress on the coronavirus front and comments from Janet Yellen pushing the U.S. relief bill. Futures pointed to a mixed start for equities in Japan, Hong Kong and Australia. The S&P 500 Index hit an all-time high on Friday, closing up almost 5% on the week and 10-year Treasury yields ended around 1.16%. The Australian dollar edged lower in early Monday trading, with the greenback mixed against G-10 peers.

Treasury Secretary Janet Yellen said the U.S. can return to full employment in 2022 if it enacts a robust enough coronavirus stimulus package, but otherwise risks a slower rebound in jobs and the economy. Without adequate support, it could take until 2025 for the U.S. labor market to recover, Yellen said on CNN’s “State of the Union.”  President Joe Biden’s $1.9 trillion stimulus plan isn’t specifically aimed at job creation, Yellen conceded, but she said that “the spending it will generate will create demand for workers.” That's put her at odds with former Treasury Secretary Larry Summers, who says Biden’s  package may be too large and came with “big risks,” including inflation.

Hong Kong’s stock traders are about to find out whether the $7.1 trillion market can hold its own without its biggest source of flows. Starting Tuesday, trading links via Hong Kong’s exchange operator allowing mainland traders to buy domestic stocks will halt through Feb. 17th due to the Lunar New Year holiday. The stock connect closure will slam the brakes on record levels of inflows that helped propel Hong Kong’s equities market to its best start to a year since 1985.

China unveiled the official version of rules intended to root out monopolistic practices in the internet industry on Sunday. The rules will take effect immediately, according to a statement from the State Administration for Market Regulation, the nation’s antitrust watchdog.
The regulations will curb anti-competitive behavior such as sharing sensitive consumer data, forming alliances that squeeze out smaller rivals and subsidizing below cost services to eliminate competitors, the regulator said.

The WallStreetBets phenomenon seems to be making its way into more esoteric corners of capital markets as big investors seek out trades that can't be wrecked by the proverbial little guy. Credit default swaps, or CDS, allow professional investors to make a directional bet on the creditworthiness of a company. They might do this because they hold the company's bonds and they want to hedge their investment, or they might use CDS simply to put on short-term trades and make money. It's a huge market, perhaps most famous for its role in the 2008 financial crisis, and it's one that is outside the purview of retail investors.

Now the world of credit default swaps seems to be borrowing a page from the stock market's playbook in response to the almighty short squeeze in GameStop. Shares of companies with high short-interest have been outperforming, either because retail investors have been pushing those stocks up in the hopes that they can make them a GameStop 2.0, or because institutional players have been closing out their short positions for fear that they'll do so. Citigroup's Calvin Vinitwatanakhun points out that the CDS market has seen a similar pattern, with swaps tied to the most-shorted companies tightening (or outperforming) relative to the broader market — meaning credit investors see a smaller chance of the company going bankrupt. 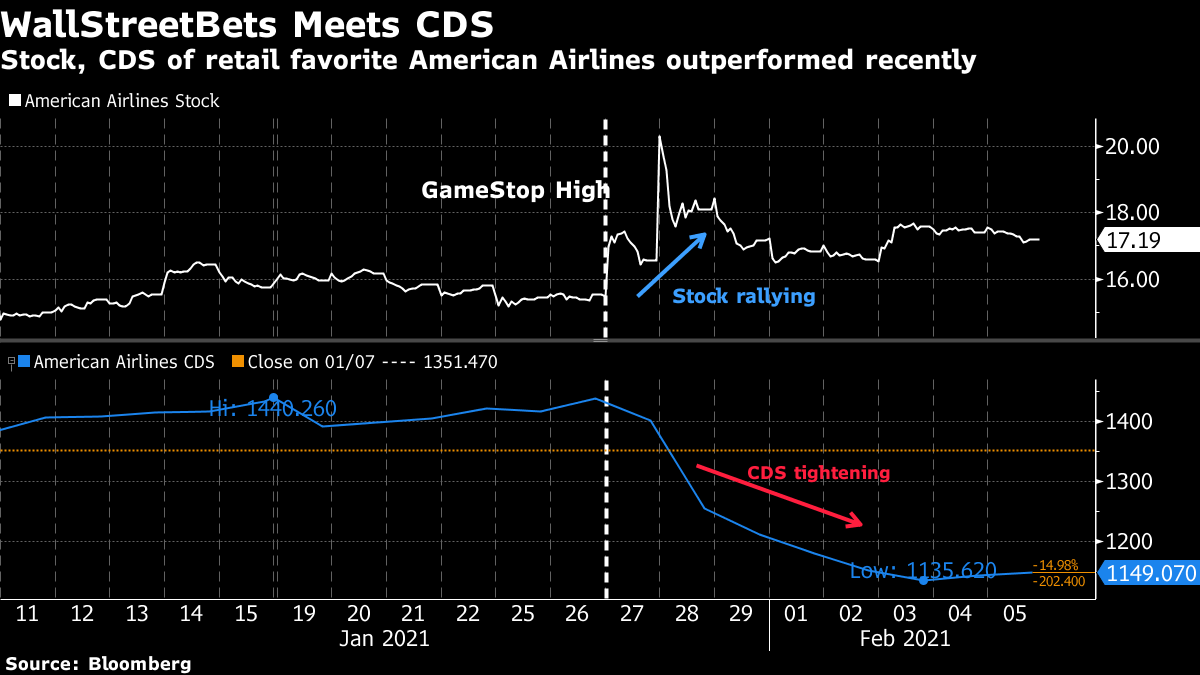 That might sound like a good thing for WallStreetBets fans — bullish bets on a company's stock are rippling through its capital structure in a way that might even save what would otherwise be a failing business — but it's also indicative of professional investors beginning to adapt to the GameStop dynamic in unpredictable ways. Since retail investors can't put on CDS trades, the swaps might be a better way for big investors to make bearish bets without drawing a huge amount of attention from forums like WallStreetBets. As Vinitwatanakhun puts it: "This could lead to institutional investors preferring to express a bearish view through CDS, especially since the potential loss on a CDS short is far more limited compared to being short the stock."

Bloomberg is tracking the progress of coronavirus vaccines while mapping the pandemic globally.