Tesla takes to Bitcoin. China's economy is quickly catching up to the U.S. Hong Kong no longer recognizes dual citizenship.

Tesla invested $1.5 billion in Bitcoin and signaled its intent to begin accepting the cryptocurrency as a form of payment, sending prices to an all-time high of nearly $45,000. The company’s embrace of Bitcoin lends increased legitimacy to electronic currencies, which have become more of a mainstream asset in recent years despite some skepticism. It also fits the maverick image of CEO Elon Musk, who upended the automotive industry with battery-powered vehicles and disrupted the equities market with the stock’s ascension to the blue-chip S&P 500 Index last year.

The global equity rally looks set to take a breather in Asia Tuesday as investors mull stimulus prospects and virus trends with stocks at record highs. Futures were little changed in Japan and Hong Kong, and dipped in Australia. U.S. stocks rose for the sixth straight session, with the S&P 500 Index closing at an all-time high spurred by fresh signs the Biden administration is committed to passing a sizable aid bill to address unemployment. An increase in vaccination numbers boosted optimism that the economy will take off later this year. Treasuries were little changed and the dollar retreated. Commodities prices pointed to renewed optimism in the global economic recovery. Oil climbed to a near two-year high.

The world’s largest economy is at risk of losing its top billing. When Donald Trump won the election in 2016, China’s GDP was about 60% of that in the U.S. By the end of his four-year term, it had pushed past 70%. That threat is likely to influence Joe Biden’s approach to the Asian nation, with a new framework for the relations having the potential of substantially reshaping economies and markets around the world, according to Bloomberg Economics. But Biden hasn't yet called President Xi. Meanwhile, by all accounts it looks like inflation is finally coming back.

Strong commodity prices and an easing of the regulatory cap on bank dividends are expected to underpin a revival in payments this year that could bolster Australia’s stock market. Payouts from firms on the S&P/ASX 200 index are forecast to rise 15% this year, before returning close to pre-coronavirus levels in 2022. The shift follows a sagging benchmark last year as firms slashed or withheld dividends. Meanwhile, it turns out more than 100 banks, exchanges, insurers and other financial firms worldwide were targets of the same type of cyberattack that crippled the New Zealand Stock Exchange in August, though they didn’t suffer the same extent of damage.

The British Consulate-General has been informed that “Hong Kong, like other parts of China, does not recognize dual nationality,” according to a statement. “If you have both British and Chinese nationality you may be treated as a Chinese citizen by local authorities, even if you enter Hong Kong on your British passport,” the U.K. said in an update to its Hong Kong travel advice. Meanwhile, the U.K.’s intelligence agencies have raised concerns over links between British universities and the Chinese government amid claims sensitive defense technology is being passed to Beijing.

And finally, here's what Cormac's interested in this morning

The January jitters are well and truly behind us, according to one global gauge of investor risk appetite. Citigroup's Global Risk Aversion Index, a combination of market indicators across asset classes and geographies, has fallen to its lowest since the pandemic first roiled markets earlier this year. Its current reading below zero points to market stress now being below the long-term historical average as investors continue to bet on a return-to-normal for much of the global economy this year. 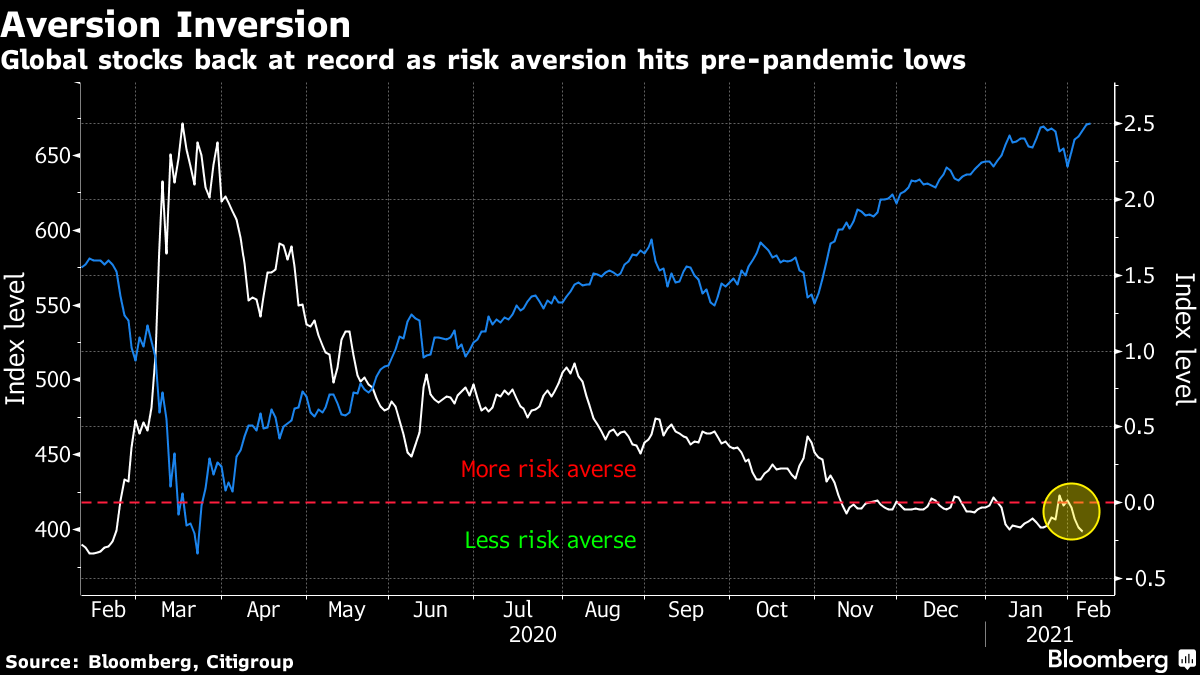 The gauge popped briefly into positive territory late last month as the retail investor ruckus upset markets, but was quick to resume its march lower. With the MSCI AC World Index of global shares back at record highs it's easy to see why risk aversion is retreating. But with signs of excess continuing to pop up in a number of markets — from cryptocurrencies to tech IPOs to SPAC launches — it may not be the time for investors to be too brave.