WHO says animals, not a lab, are to blame for the coronavirus. Global stocks halt rally. A billionaire's casino dream lies in tatters.

A World Health Organization investigation in China found that the coronavirus most likely jumped to humans through an animal host or frozen wildlife products, finding that it’s “extremely unlikely” it came from a laboratory leak. No further research is needed to look into the theory about a leak, Peter Ben Embarek, a WHO official, said at a joint briefing with China in Wuhan, the city where Covid-19 first mushroomed at the end of 2019. That speculation has been promulgated by former U.S. President Donald Trump and some others. Here is how Bloomberg is tracking the pandemic.

Asian stocks looked set for a mixed start after their U.S. peers halted a six-day winning streak as investors contemplated whether commitments by the Federal Reserve and the Biden administration to let the economy run hot will spark destabilizing inflation. Futures slipped in Japan and were little changed in Australia. The S&P 500 Index edged lower from an all-time high. Treasuries advanced and the dollar fell for a third straight session. Oil climbed for a seventh session. Bitcoin fluctuated around a record.

Billionaire James Packer’s dream of opening a landmark casino in his home city of Sydney hangs in the balance after a damning report into money laundering and organized crime links found Crown Resorts isn’t fit to hold a gaming license. An excoriating report released Tuesday recommended that Packer, currently Crown’s largest shareholder with a 36% stake, be subject to a 10% ownership cap that requires special permission to be lifted. It also called for the departure of the CEO and key directors and an overhaul of the firm’s culture and governance as key conditions for the casino to open.

Japan’s most famous activist investor jumped back into the spotlight in 2021, taking on a global private equity giant over one company and scoring a lucrative exit at another. Yoshiaki Murakami, an early champion of shareholder rights, has been locked in a battle with Carlyle Group over energy and environmental firm Japan Asia Group, pushing the investing behemoth to double its takeover price and then trumping that offer. Separately, he registered a win at Hoosiers Holdings when the real estate company agreed to buy back his large stake at a higher price than he paid.

Tesla has issued back-to-back mea culpas in a matter of days in China, showing deference to government authorities in stark contrast with Chief Executive Officer Elon Musk’s years of combativeness in the U.S. Shortly after state media broke the news Monday that five Chinese regulators had summoned Tesla representatives over several quality and safety issues, the company pledged to strictly abide by Chinese laws and regulations and strengthen internal management. Last week, the carmaker said it was sorry that a staff member blamed the national grid for damaging a customer’s electric vehicle.

With investors seemingly cheering the "imminent" return of inflation, they need to be careful what they wish for. A faster-than-expected surge in prices would bring forward the day central banks are forced to tighten policy, taking away the punch bowl that is lubricating the current risk rally. And the higher bond yields climb, the more there is an argument for an alternative to equities, undermining the TINA mantra. That makes monitoring the link between stocks and bonds crucial, to watch out for the trigger point that shows when inflation has flipped from being a positive to a negative for risk assets. 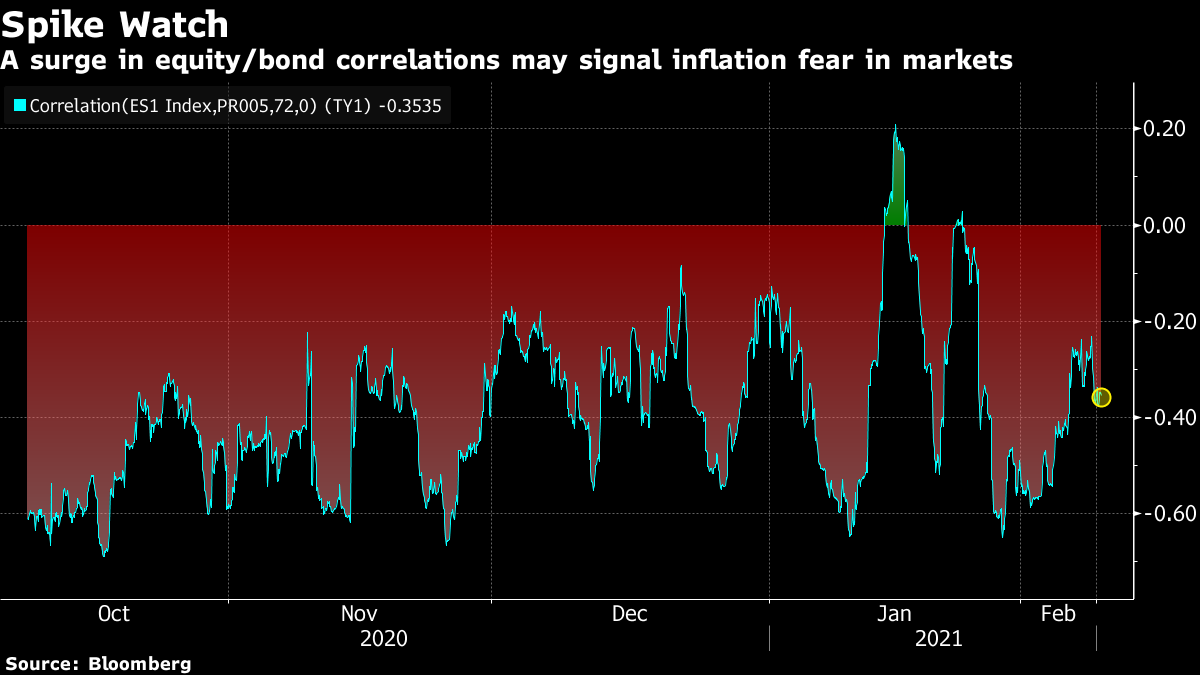 JPMorgan strategists have suggested short-term equity-bond correlations will do the job, with the danger signal coming when there is a rapid spike. A high-frequency measure of 72-hour correlation between S&P 500 futures and 10-year Treasury equivalents stood at about minus 0.34 on Tuesday, up from minus 0.57 at the end of January, data compiled by Bloomberg show. That shows a slow rise, but no spike and implies traders are not yet concerned about the negative impact of price rises. JPMorgan calls it the "most important indicator" in global markets right now. It's one worth keeping an eye on.

Need to Know: Stocks aren’t in a bubble, but here’s what is, according to fund manager Cathie Wood

OP: Who's Pulling the Strings?