Time For a Trim

A World Health Organization panel recommended AstraZeneca’s vaccine for all adults over 18, in a move that may encourage more countries to adopt the product. That wasn't the only positive news, as an asthma treatment from Astra – which reports earnings today – reduced the need for urgent care of Covid-19 patients. Elsewhere, people in Germany can get a hair cut from the beginning of next month, after Angela Merkel revealed plans to gradually open up the euro area's largest economy, despite the chancellor's concerns over a renewed spike in coronavirus infections.

Brexit news makes an unwelcome return to our agenda after the European Union rebuffed the U.K.’s call to reset the two sides’ relationship, saying Britain needs to honor the promises it made on Northern Ireland. The EU, meanwhile, is seeking to postpone the ratification of the post-divorce trade deal. The bloc wants to delay the end of the provisional application of the pact from the end of February until April 30 to give time for governments and EU lawmakers to scrutinize the agreement. “It’s a little surprising the EU wish to change it quite so soon,” said U.K. Brexit negotiator David Frost, who has recently spoken of a "bumpy" relationship. Still, officials on both sides reckon it’s unlikely lawmakers will try to vote down the accord.

Uber Technologies reported declining revenue in the fourth quarter, with performance in much of the Americas pretty dismal. Despite the shortfall, though, the San Francisco-based company narrowed its loss in the quarter that ended in December. Uber didn’t offer a forecast in the report, and Chief Executive Officer Dara Khosrowshahi indicated that better times may not arrive until the summer. As the pandemic continues to drag on ride-hailing, delivery is the star, seeing 130% quarterly growth in gross bookings. A recent pact to buy booze delivery provider Drizly is intended to complement the food business.

Joe Biden had his first conversation as president with Chinese leader Xi Jinping, speaking of his concern about China’s “coercive and unfair economic practices” as well as human rights abuses in the Xinjiang region, according to a White House account. Biden also expressed misgivings about the country’s growing restrictions on political freedoms in Hong Kong and “increasingly assertive actions in the region, including toward Taiwan.” China’s official state news agency Xinhua repeated that Taiwan, Hong Kong and Xinjiang issues were China’s domestic affairs, and said the U.S. should respect China’s core interests and act with caution.

Credit Agricole and Commerzbank are providing updates amid a tough earnings season for European banks, though Bloomberg Opinion says there are reasons to be optimistic on profit growth more broadly. Drinks maker Pernod Ricard and steel group ArcelorMittal are also reporting. Elsewhere, Donald Trump's impeachment case continues after House Democrats showed new video of the storming of the U.S. Capitol. Meanwhile, Economist Lisa Cook has the backing of several key White House officials and allies as a possible choice for a Federal Reserve board vacancy. In South Africa, here's what to watch as President Cyril Ramaphosa delivers his state-of-the-nation speech later. In markets, JPMorgan said commodities appear to have begun a new supercycle of gains, while stock futures in the U.S. and Europe are steady.

And finally, here's what Adam Haigh is interested in this morning

Russia's economy suffered last year not just from the pandemic upending the globe but also from the plunge in crude oil prices. As a cyclical upswing kicks in and the recovery builds, some strategists are being lured back to its equity market. Jefferies Inc.'s global stocks team just raised their stance to "bullish," pointing out that earnings are being steadily revised up. Also, the authorities have an "almost perfect policy setting" with near record high FX reserves, a current-account surplus and negative real interest rates, they argue. But not all are convinced. BlackRock, the world's biggest asset manager, is concerned about political tensions between Russia and the West. As Bloomberg reported this week, Chris Colunga, who co-manages the firm's Emerging Europe fund, has reduced the fund's exposure to Russia, which as recently as December was the biggest geographical holding at 57%. Whichever side of the fence you're on, there is no denying that European emerging markets have been significant laggards in the past year, as this chart shows. A strong cyclical upswing in Russia may well begin to close that underperformance. 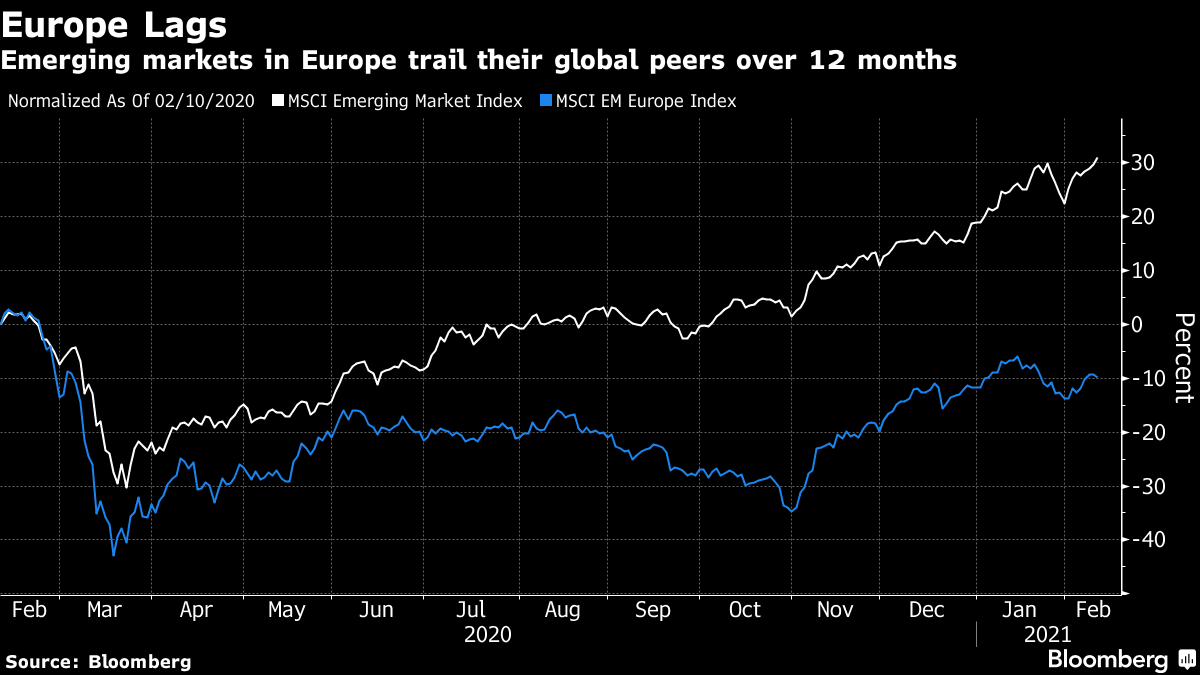 Adam Haigh is a Cross-Asset reporter and editor for Bloomberg News in Sydney.