Year of The Ox

The year of the Ox begins and, despite all the coronavirus-fuelled drama, Europe's Stoxx 600 equities index ended the year of the Rat down less than one percentage point. While stock markets are calm this morning amid closures on several Asian bourses, the frenzy of trading in U.S. equities is showing no signs of abating and looks set to surpass levels seen during the worst of the pandemic panic in March. Elsewhere, oil traded in New York ended eight days of gains — its longest winning streak in two years. Bitcoin, meanwhile, sees small gains today after soaring to a record as Mastercard makes it easier for customers to use cryptocurrencies.

Shares of Bumble, owner of the dating app where women make the first move, closed up 64% in their New York trading debut. That's created a rare female billionaire in the form of 31-year-old Whitney Wolfe Herd, who founded the company after leaving Tinder and filing a sexual harassment suit against the firm. Herd said she hopes women-led management "will not be a rare headline.” Meanwhile, if you're thinking of picking up some Bumble stock as a Valentine's Day gift, here's some things to consider first.

The U.K. and the European Union are locked in a standoff over how to implement the Brexit trade deal, despite a rare face-to-face meeting between Cabinet Office Minister Michael Gove and European Commission Vice-President Maros Sefcovic in London. They did not resolve the key disagreements over trade that have soured the U.K.-EU relationship in the six weeks since Brexit was completed. At issue is the part of the U.K.’s exit deal covering Northern Ireland, which imposed checks on goods moving across the Irish Sea from Great Britain. Gove and Sefcovic pledged to meet again by Feb. 24.

Mario Draghi is doing what everyone said he would by providing a unifying presence in Italian politics. The biggest force in Italy’s parliament, the Five Star Movement, put its weight behind premier-designate Draghi, assuring him broad cross-party support. The party, which has anti-establishment roots and long denounced bankers and technocrats, joins other backers including the center-left Democratic Party and the anti-migrant League of Matteo Salvini. One analyst thinks Italy should seize on the Draghi optimism in financial markets by borrowing money it won't have to pay back for a century.

Watch luxury and cosmetics stocks after L’Oreal beat consensus but the report was described as “unexceptional” by RBC Capital Markets, given the impressive performances of peers including Estee Lauder in recent weeks. Dutch bank ING updates this morning, while a surge in subscribers at Walt Disney's video subscription unit cushioned the blow from the firm's crippled theme park unit. Keep an eye on U.S. pot stocks too after  Tilray fell 50% as another Reddit-inspired rally faded. Meanwhile, there's a blank-check company (or "SPAC") debut in Amsterdam as ESG Core Investments starts trading. Russia is seen keeping interest rates as they are, and foreign exchange market watchers can also look out for a economic growth statistics from Norway and Poland and inflation from the Czech Republic and Hungary. Americans get a three-day weekend due to Presidents' Day on Monday.

The feeding frenzy in stocks continues: Over the last 20 days, an average 15.8 billion shares have traded each day on all U.S. exchanges, according to data compiled by Bloomberg. That’s just below the average hit on March 25, which was the highest in at least over a decade. Bursts of trading in U.S. stocks usually come amid periods of surging volatility in markets, such as the spike seen early last year when fears about the coronavirus spread led to a sharp selloff in equities. This time, volatility is much more subdued suggesting the jump in trading activity is one more sign of exuberance in the stock market. Last month’s parabolic surge and rapid collapse in GameStop shares seems to have done little to dampen enthusiasm for equity exposure. A similar measure of euphoria in the options market — volume in bullish bets via call options — has itself hit another record. 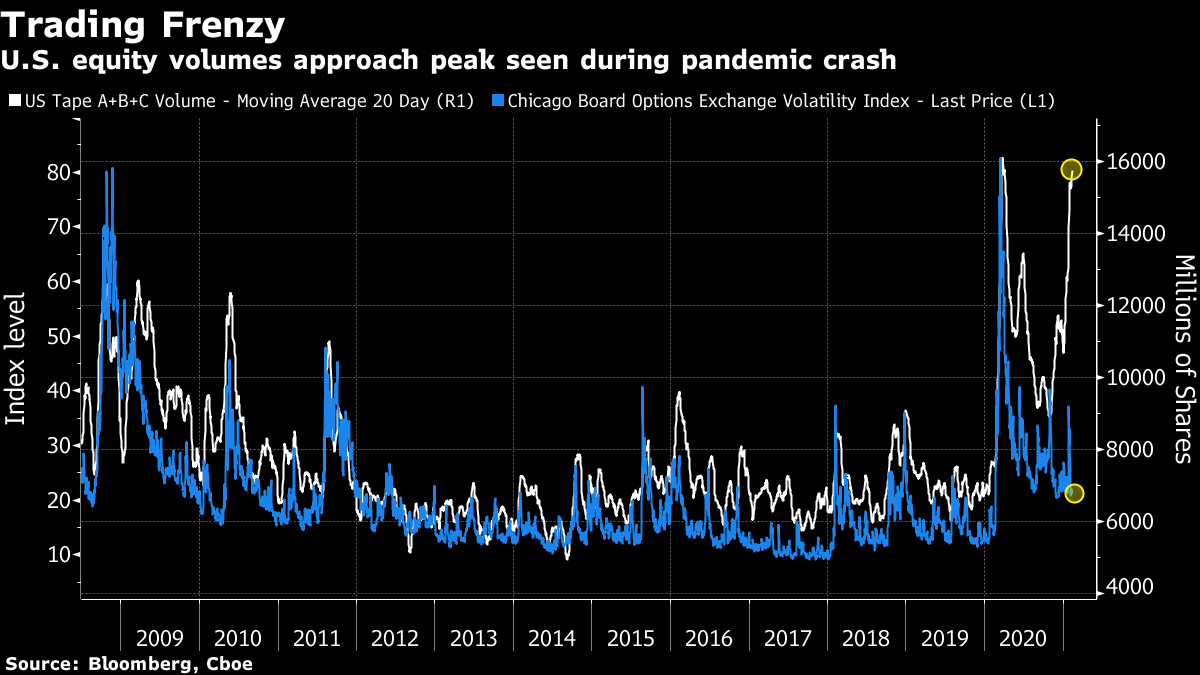