Treasury yields surged to the highest in a year, while U.S. stocks pulled back from records as investors weighed how the increase in yields could impact risk assets. Asian stocks looked set to slip. The yield on benchmark 10-year Treasuries surged to 1.31%, the highest since February 2020, helping global bonds extend their worst start to a year since 2013. The dollar strengthened. Oil held above $60 a barrel in New York while gasoline futures surged as a deepening energy crisis in the U.S. crippled the petroleum industry. China remains shut for a week-long holiday and will reopen Thursday. Bitcoin broke through $50,000 for the first time before falling back.

The energy crisis crippling the U.S. showed few signs of abating as blackouts left almost 5 million customers without electricity, while oil refineries and shale wells were shut during unprecedented freezing weather. Spot power prices in Texas hit the $9,000-per-megawatt-hour cap for a fourth straight day. Occidental Petroleum, the second-largest oil producer in the Permian Basin of West Texas and New Mexico, told buyers it would be forced to curtail oil deliveries.

Warren Buffett’s Berkshire Hathaway cut its Apple holding during the last few months of the year. The conglomerate also revealed three new buys that it snapped up in secret. Berkshire bought stock in Verizon, insurance broker Marsh & McLennan Cos. and Chevron, bets that were granted confidential status and not revealed in a third-quarter regulatory filing, according to an updated document released Tuesday. The Apple stake reduction left Berkshire with a holding valued at about $120 billion at the end of 2020, according to another filing. The iPhone maker remains Berkshire’s biggest single stock holding.

Hong Kong said it will extend restaurant hours, double the number of people allowed to sit at one table, and reopen certain venues beginning Thursday, formalizing its plan to roll back restrictions as cases dwindled during the Lunar New Year holiday. Meanwhile, a panel recommended that Hong Kong approve the Covid-19 vaccine from Chinese developer Sinovac. Meanwhile in the U.S. Covid cases and hospitalizations are dropping dramatically suggesting that measures to interrupt transmission are working, at least for now. About 11.8% of the population has now received at least one dose of a vaccine.

Japan’s hot startup stocks that do business in areas that could be described as mundane have pushed their founders in the league of the ultra-wealthy. Take AI inside Inc., which helps turn handwritten documents into electronic files. Or Freee K.K., a provider of cloud-based accounting. Or Rakus Co., whose goal is to help small and medium enterprises with their bookkeeping and emailing services. Their shares have all more than doubled in the past year, enriching their founders.

How low can spreads go? The amount of extra premium that investors get to buy U.S. investment-grade bonds instead of U.S. Treasuries keeps shrinking. This year spreads on benchmark indexes like the Bloomberg Barclays Corporate Agg or Bank of America Merrill Lynch's investment-grade bond index have already touched some of their lowest levels since the financial crisis, as investors rush to snap up risk assets. 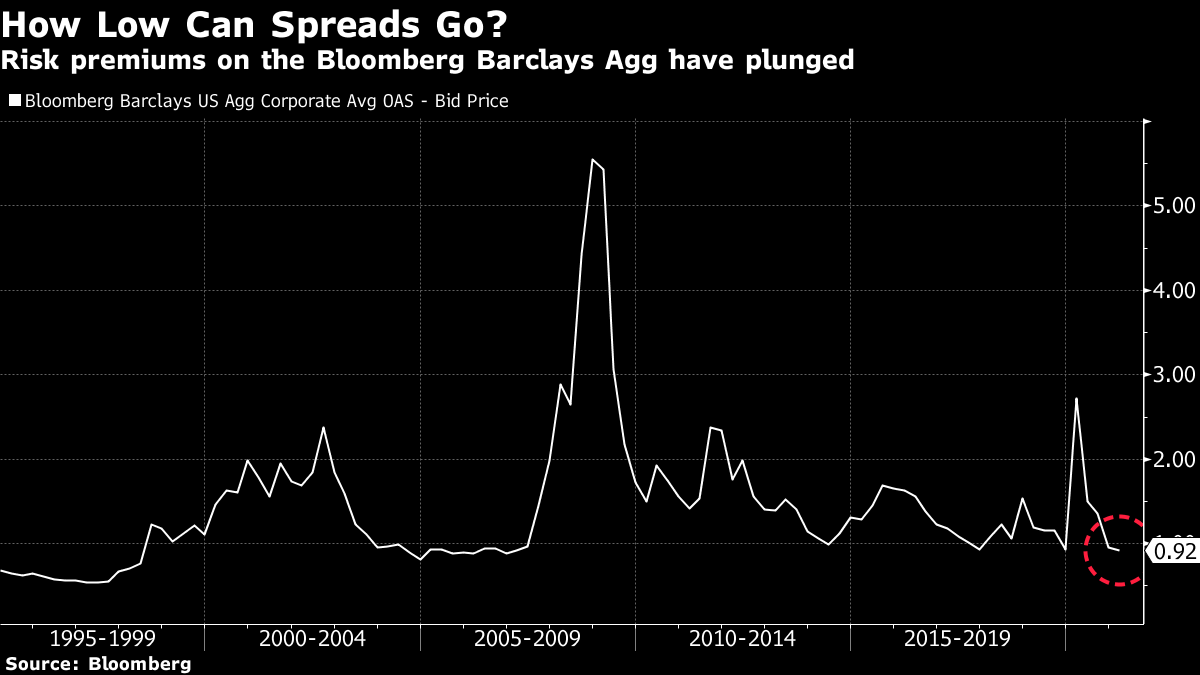 Spreads could in theory fall even lower. They averaged 60 basis points in 1997 and are in the 90s currently. But there are a few reasons that they shouldn't. For a start, such indexes are very different beasts compared to their previous incarnations. They're full of BBB-rated debt — the lowest rung on the credit ratings ladder — and much bigger than they once were. Yields on the debt have also shrunk to less than 2%, where they were above 7% in the 1990s. That should limit appetite for the bonds as people seek out higher-yielding alternatives.

But this cycle in risk assets is an unusual one and investors seem desperate to buy paper of virtually any sort. If spreads fall much further it could be evidence that investors are starting to lose their grip on rationality and the mood is venturing into excessive territory. One to watch.

Download the Bloomberg app: It’s available for iOS and Android.