Health care workers in France and Germany have voiced concerns about side-effects of AstraZeneca's Covid-19 shot. This threatens to hamper the EU's already-lagging inoculation drive, which relies upon 300 million doses from the U.K. pharma giant, among others. Staff at a hospital in southwestern France demanded the vaccine be replaced with shots from Pfizer-BioNTech and Moderna, after 50-70% of immunized health workers there experienced side effects. In an ambulance corps in Dortmund, one-quarter of the 300 people vaccinated late last week with the AstraZeneca shot called in sick afterward, a local newspaper reported. AstraZeneca said it hasn’t seen reports of reactions that don’t fit with evidence gathered during clinical trials. Meanwhile, a lab study found Pfizer and BioNTech's shot to stimulate about two-thirds lower levels of neutralizing antibodies against the South African strain of the virus.

Brent oil rose past $65 a barrel in London, as a cold blast that’s taken out almost 40% of U.S. crude production morphed into a global supply shock. Futures advanced 1.3% after closing at the highest in almost 13 months. The global crude benchmark last traded above $65 a barrel on Jan. 21, 2020, before the Covid-19 pandemic wreaked havoc on energy markets and a price war between Saudi Arabia and Russia sent contract prices collapsing. More than 4 million barrels a day of U.S. oil output is now offline, according to traders and executives, amid an unprecedented cold snap that’s frozen well operations and led to widespread power cuts.

Germany's Thyssenkrupp ended talks with Liberty Steel Group about potentially selling its steel division and will try to make the business sustainable on its own. Thyssenkrupp's CFO cited differences over corporate value – Bloomberg News reported earlier this month that Liberty’s offer for the German conglomerate’s steel unit gave it a negative equity value of at least 1.5 billion euros. While the steel business has dragged on Thyssenkrupp for years, it’s been getting a boost from rising metal prices and the Essen-based company has said it’s in no rush to divest.

Today's earnings rush started early, with Credit Suisse posting a narrower-than-expected loss and Airbus beating its own target of at least breaking even during the fourth quarter. Daimler forecast a significant rise in sales and Ebit for 2021. There are plenty more highlights on this morning's agenda, including Barclays, Nestle, Orange, Repsol and EDF. It'll remain busy around the market close, with puffy-jacket maker Moncler, biotech firm Galapagos and car parts maker Valeo due, among others. U.S. earnings including Walmart and Marriott are expected starting around noon. In the afternoon, weekly U.S. jobless claims are forecast to show a continued decline. In the European evening, NASA's Perseverance rover will hopefully make a smooth landing on the surface of Mars.

Corporate bonds have often played the role of canary in the risk-asset coal mine and their trends are still worth watching despite the massive central bank intervention in the credit market over the last year. As my colleague Katie Greifeld pointed out Wednesday, U.S. traders are building bearish bets against the largest corporate debt exchange-traded fund and outflows are mounting as spreads narrow and bond yields rise. Short interest as a percentage of shares outstanding on the $48 billion iShares iBoxx $ Investment Grade Corporate Bond ETF has jumped to more than 15%, up from 6% at the start of the year, according to data from IHS Markit Ltd. That's the highest since March at the peak of the coronavirus panic. Short interest for the $22 billion junk bond equivalent has risen to 28%, up from 14% at the beginning of the year. Outflows are also mounting — investors have pulled roughly $6 billion from the investment grade ETF so far in 2021, after pouring nearly $15 billion into the fund in 2020, according to data compiled by Bloomberg. The moves seem less a bet on a credit crunch given the Fed still looms over the market and more a wager on a spike in bond yields sparking a risk asset selloff. 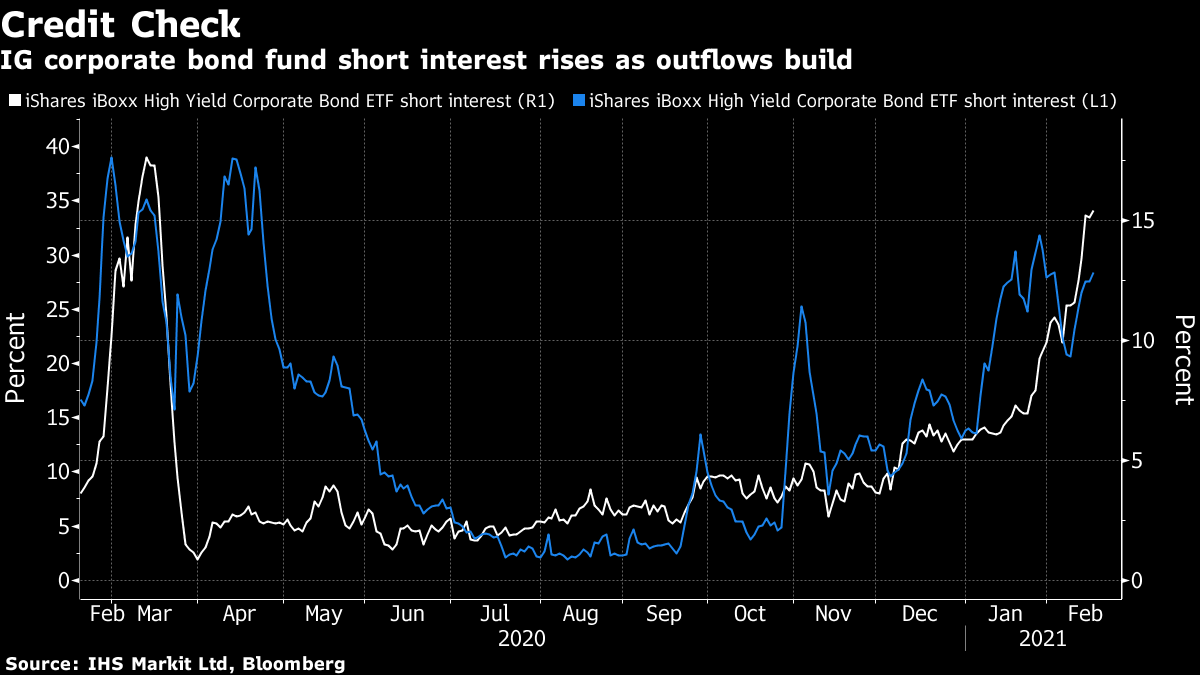