NASA successfully landed its largest and most sophisticated science rover on Mars, as the spacecraft Perseverance touched down in an ancient river delta that may contain signs of whether the planet ever harbored microbial life. Mars landings are notoriously tough, and Perseverance’s arrival in Jezero Crater was the trickiest NASA has ever attempted. Earlier this month, a Chinese spacecraft made it into Mars's orbit for the first time, boosting China’s attempt to be a space power on par with the U.S. Just a day before that, the United Arab Emirates’ Hope spacecraft entered Martian orbit. The invasion of Mars will end with three scientific missions to the planet's surface by month’s end.

Asian stocks looked poised to track small losses in their U.S. peers and Treasury yields edged higher as investors assessed how rising borrowing costs could impact the equity rally. The dollar weakened. Futures pointed lower in Japan and Hong Kong after the S&P 500 and tech-heavy Nasdaq 100 both slipped about 0.4%. A report earlier showed initial jobless claims rose more than expected. Crude oil fell for the first session in four. The pound touched the strongest level versus the euro since March amid continued optimism over the nation’s vaccine rollout. Bitcoin retreated, though remained above $52,000.

Australia will hold talks with Facebook CEO Mark Zuckerberg in a bid to break a legal standoff after the tech giant angered the government by blocking the nation’s news sharing on its platform. Zuckerberg’s company switched off the main news source for almost one in five Australians and disabled a raft of government Facebook pages carrying public health advice on the coronavirus, warnings from the weather bureau and even the site of a children’s hospital. Despite the meeting with Zuckerberg, Treasurer Josh Frydenberg said the government would be proceeding with controversial legislation that would force Facebook and Google to pay Australian publishers for news content.

Tesla fell in Consumer Reports’ latest auto brand rankings, outdone by Mazda’s mainstream models. The electric-car maker dropped five spots from last year’s report to rank No. 16 — the middle of the pack — in the closely watched annual assessment based on road tests, reliability data, owner satisfaction surveys and safety performance. “The only model we’re able to recommend is the Model 3. All the other ones have below-average reliability,” said Jake Fisher, senior director of automotive testing for the New York-based magazine. Speaking of the Model 3 Standard Range Plus, it's now 2.6% cheaper in the U.S. The company also cut its prices for the model in Japan.

Deutsche Bank scaled back plans for its bonus pool after the European Central Bank objected to proposed payout levels, highlighting the challenges of rewarding top performers while heeding needs for constraint during the pandemic. Germany’s largest lender initially planned to pay out more than 2 billion euros ($2.4 billion) in 2020, but that amount has been cut, according to people familiar with the matter. Credit Suisse investment bankers, however, are set for higher bonuses. Meanwhile in Asia, Morgan Stanley and Goldman Sachs investment bankers are getting the biggest bonus bumps among peers.

What can Dr Copper tell us about bond yields? Possibly a lot. The price of copper has soared past $8,500 a ton on the London Metal Exchange, taking it back to where it was before the global pandemic, or even the trade war between the U.S. and China. Commodity trading advisors — trend-following systematic funds that can have a big impact on markets — have been snapping up the metal as prices surged. In fact, they've been buying far more than what pure fundamentals, like manufacturing data, might suggest, according to quant analysts at Nomura. As they put it: "CTAs’ net long position in copper futures is large enough that it effectively assumes that the global economy will get back to where it was before the U.S.-China trade war." 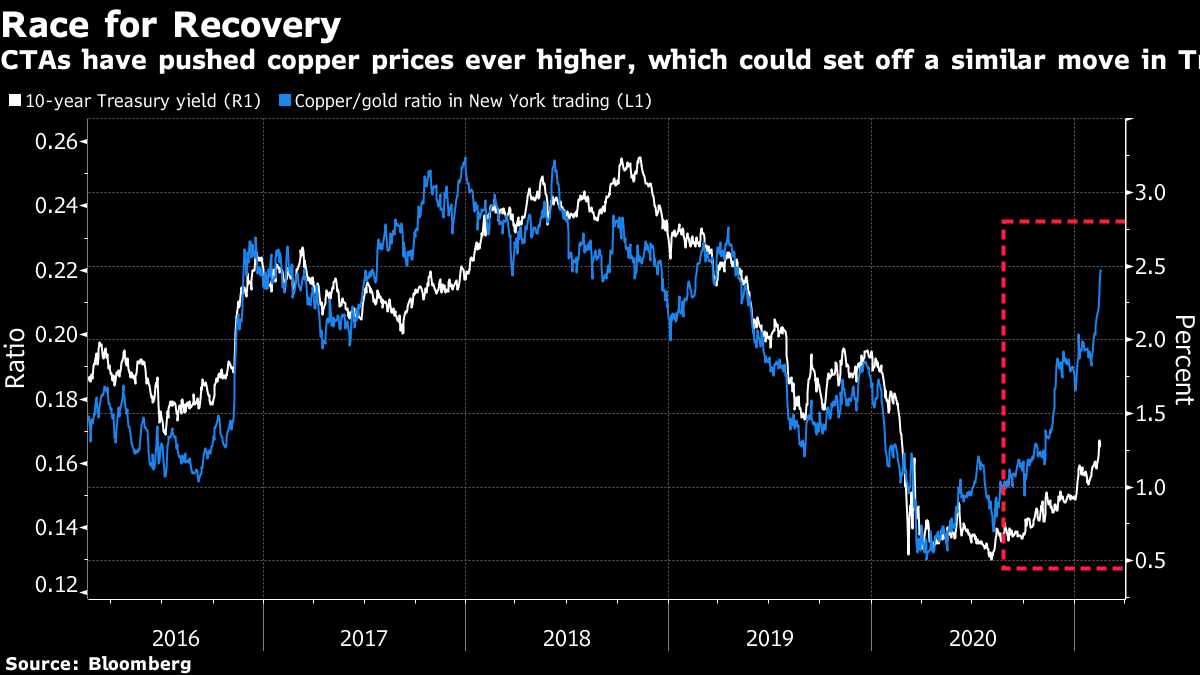 The implication here is that speculators could take an early or excessive step to position themselves for economic recovery, shedding U.S. Treasuries as a way to balance their portfolios and unexpectedly intensifying selling momentum in the debt. That could exacerbate moves in bond yields and potentially unsettle stocks. According to Nomura, there's a risk that "CTAs’ move to the short side in [U.S. Treasury futures] becomes essentially unstoppable, pushing the 10yr yield to above 1.5% and forcing U.S. equities (the S&P 500) to adjust downward by 8% or more." In short, Dr. Copper-esque positioning in the bond market would not be healthy for risk assets.