The Pfizer and BioNTech Covid-19 vaccine appeared to stop the vast majority of recipients in Israel becoming infected, providing the first real-world indication that the immunization will curb transmission of the coronavirus. The vaccine, which was rolled out in a national immunization program that began Dec. 20, was 89.4% effective at preventing laboratory-confirmed infections, according to a copy of a draft publication that was posted on Twitter and confirmed by a person familiar with the work.

Asian stocks are poised for a muted start to the week amid rising bond yields, as investors weigh concerns about inflation derailing economic growth and signs that vaccines can reduce the transmission of Covid-19. Equity futures slipped in Australia and rose in Japan. U.S. stocks finished mostly lower on Friday as benchmark Treasury yields climbed to the highest levels in a year. Oil traded below $60 a barrel as wells slowly restarted in Texas after being hit by a big freeze. Federal Reserve Chair Jerome Powell this week is expected to re-emphasize the central bank’s commitment to easy policy to support economic recovery.

Companies Leading the Rise of Cybersecurity

If we’re lucky, cybersecurity can feel like an afterthought – something working in the background. This perception confronts the reality that with an ever-growing number of online threats, the cybersecurity theme is driven by dozens of highly innovative companies. We recently profiled four of the key players.

The Chinese renminbi is accelerating its transformation from a sleepy backwater of the foreign-exchange market into a currency fit to rival global peers. In London, there’s more yuan changing hands than ever before. Options on the Chinese currency exceed those referencing the Japanese yen, and buying or selling the yuan is now as cheap as trading the British pound. Against this backdrop, there are signs the renminbi is playing an increasingly larger role in influencing broad dollar moves, according to Wells Fargo. Underpinning the explosion this time lies a torrent of capital flowing into China’s markets, fueled by a frantic search for returns with over $14 trillion of debt globally paying less than 0%. China’s 10-year bonds yield 3.3%, compared with around 1.3% for the U.S. equivalent.

HSBC is considering the return of some global leaders to the bank’s original hometown, reinforcing Asia’s role as its center of gravity. A cadre of senior executives is set to relocate in coming months to Hong Kong from HSBC’s Canary Wharf headquarters, say people familiar with the plans, as Europe’s biggest bank pares its global ambitions. Chief Executive Officer Noel Quinn will begin marketing what’s known internally as the “pivot to Asia” on Tuesday when he announces 2020 earnings.

Australia’s chief financial officers “have their mojo back” and around half of them are willing to take more risk onto their balance sheets in order to capitalize on an economy increasingly showing a V-shaped recovery. Some 72% of the Australian CFOs feel optimistic or highly optimistic about the financial prospects of their companies, Deloitte Access Economics said in a report released Monday. The survey found most CFOs plan to pursue more deals this year with the with the focus “largely on acquisitions.”

By now it seems clear that the recession sparked by Covid-19 is no ordinary downturn. One of the most unusual things about it is that it came with much stronger-than-expected consumer spending. First people stockpiled things like toilet paper, face masks and food. Then, as it became clear that coronavirus would be around for a while, they bought a whole bunch of things to hunker down for the long run. They bought computers so they could work from home while kids attended school virtually. Some redecorated living rooms or embarked on long-awaited renovations to make their homes more comfortable. Money that might normally have been reserved for going out or taking a vacation, went towards buying a big-screen TV or a better couch. 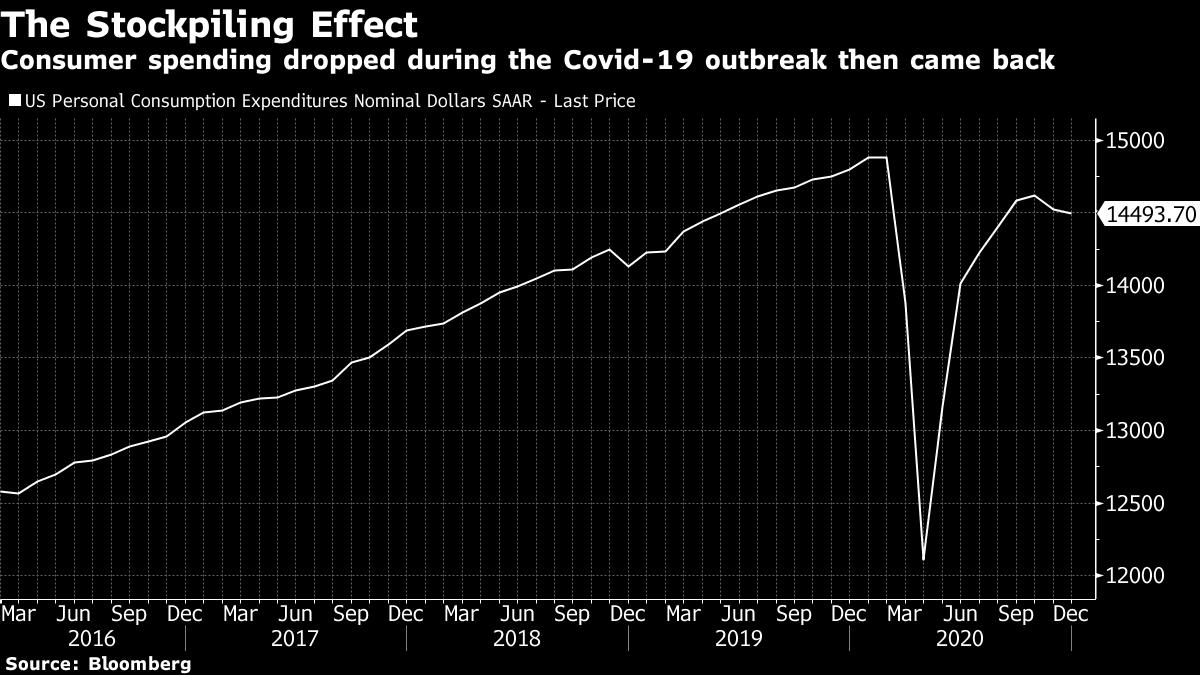 So great was this surprise demand for goods, that it's caused more than a little chaos for manufacturers. Automakers are scrambling to secure enough microchips after underestimating their needs last year, and global shipping is snarled partly because the U.S. is ordering so much stuff from China. Looking back at the start of the coronavirus crisis, it didn't seem obvious that it would result in a spending spree as people reoriented their lifestyles from going out to staying in. A year later, it's clear that pandemic-related spending was a counter-intuitive but very important component of the coronavirus recession — and one of the things that makes the whole economic experience so unusual.