Good morning. There are concerns about getting the virus under control, Brexit talks continue and Biden's chances of winning increase. Here’s what’s moving markets.

The U.K.'s Covid-19 outbreak is not under control with hospitalizations and death rates rising, the government's chief scientist warned. The number of cases registered on Wednesday equaled the highest level so far in the pandemic, though there are signs that social restrictions are helping. There are concerns about the spread of the virus in the U.S. too, with infection rates rising in Wisconsin and New Jersey. There are some more encouraging signals on the vaccine front, however, with the front-runner from the University of Oxford and AstraZeneca Plc said to be set for an accelerated review by European regulators, plus a bet on an old-school approach from a French drug company and the approval of a rapid test.

The final scheduled round of Brexit talks continues on Thursday, with markets eagerly awaiting an update on whether the more conciliatory tone from the U.K. and the European Union recently will result in some tangible progress being made. A report from EY said financial services firms have so far shifted more than 1.2 trillion pounds worth of assets and around 7,500 employees out of the U.K. ahead of Brexit, with more likely to come. And the U.K. has been warned of consequences if it splits from the bloc on how it regulates its financial industry. Currency and rates traders, though, are positioning for a more amicable conclusion to the talks.

Joe Biden's chance of getting to the White House increased after the first debate, according to professional forecasters, who now see a 78% chance of victory for the Democratic presidential candidate. During the debate, Biden's campaign raised nearly $10 million. That's despite the event having descended into name-calling and bickering, prompting the debate commission to say a format change is coming. Biden yesterday hammered the president on the economy on a journey through the Rust Belt, home to many of the White working class voters he wants to win back from Trump. Beyond the campaign trail, Treasury Secretary Steven Mnuchin said he sees "one more serious try" at securing a deal on a fiscal stimulus package with Congress.

The European Union begins a two-day summit on Thursday with German Chancellor Angela Merkel likely to be center stage as she attempts to bridge the differences between members in order to unlock the bloc's 1.8 trillion-euro recovery package amid concerns about a possible delay. Merkel said Germany will return to normal spending levels as soon as possible as she defended its unprecedented borrowing to deal with the fallout from the pandemic. French President Emmanuel Macron is also expected to address the conflict between Armenia and Azerbaijan, having called Turkish rhetoric on the fighting "dangerous," and leaders are expected to call for a rebalancing of the EU's relationship with China.

Stock trading in Asia was hit by the worst-ever outage in Japan which caused the Tokyo exchange to halt trading for the entire day. European and U.S. equity-index futures are trending higher going into the session. Oil held onto gains after U.S. crude stockpiles shrank. The economic data agenda is busy again, topped by manufacturing activity for the euro-area, the U.K. and later for the U.S., plus jobless claims for the latter. Numbers from Swedish fashion retailer H&M top the earnings calendar.

And finally, here's what Mark Cudmore is interested in this morning

A very bad U.S. labor market looks set to deteriorate further. It’s Thursday and hence jobless claims data out of America. Amid all the talk on how impressive the economic recovery has been, it’s worth a reminder that continuing claims remain almost double the record prior to the March blowout — that’s in data going back more than 50 years. And then Wednesday saw the announcement of tens of thousands of job cuts by blue-chip companies, including Walt Disney Co. and Allstate Corp., the fourth-largest car insurer in the U.S. It’s hard to overstate how desperately the U.S. economy needs more fiscal stimulus. Without it, financial assets will not remain elevated by liquidity alone. Excess cash compels investors to buy assets that offer minimal return for high risk, but it doesn’t mean they will purchase loss-making or negative-return assets. If corporate retrenchment accelerates from this base level of unemployment, 2021 may make 2020 look a pleasant year for markets 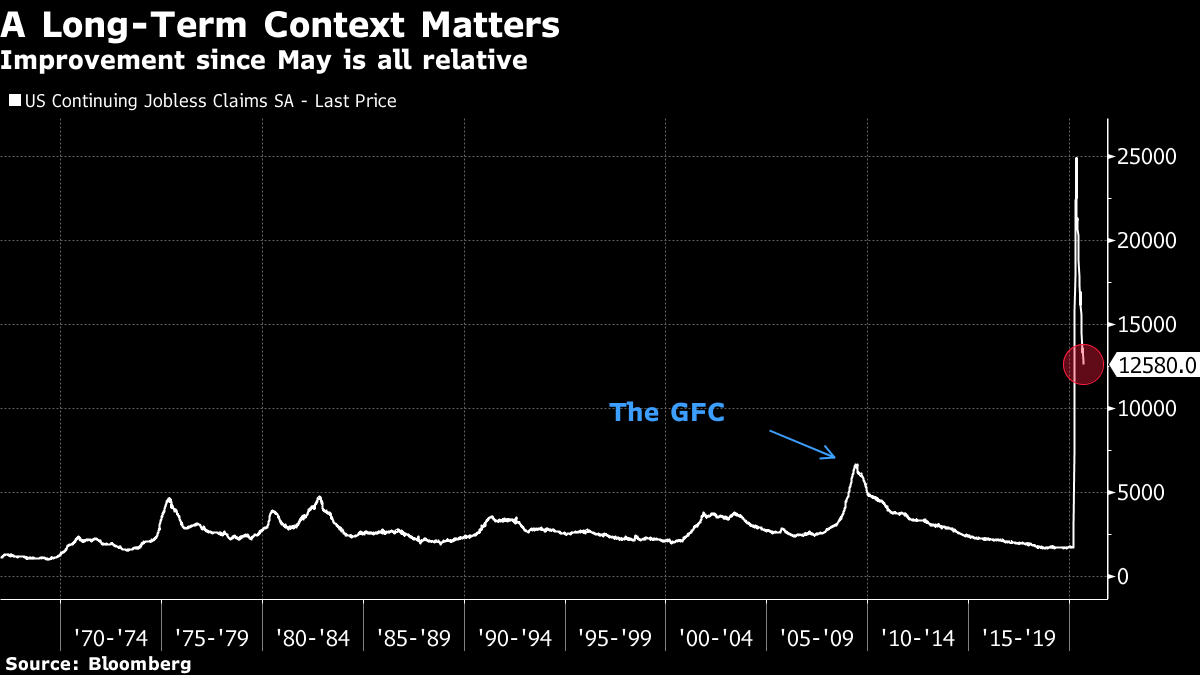 Mark Cudmore is a Bloomberg macro strategist and the Managing Editor of the Markets Live blog. Bloomberg Terminal users can follow him there at MLIV..

Compelling layers: With plenty of mystery, ‘One Lane Bridge’ takes viewers, actor on a journey