Good morning. Bond yields and inflation remain in focus, the U.K. is laying out a plan to reopen and commodity markets are red hot. Here’s what’s moving markets.

Benchmark bond yields are surging and signs of coming inflation are hitting frothier parts of the market. The Nasdaq 100 has notched up its longest losing streak in four months and Bitcoin is tumbling amid lingering doubts over the sustainability of the cryptocurrency's parabolic rally. In bond markets, exchange-traded funds are getting hammered by building inflation bets and investors are inflation-proofing their debt portfolios. The European Central Bank is closely monitoring government bond yields, in line with other monetary authorities facing up to the trend. U.S. Treasury Secretary Janet Yellen and Federal Reserve Chairman Jerome Powell, meanwhile, are staying wary of signs of froth in the market as they push ahead with stimulus measures which will elevate the euphoria.

The U.K. government said the end of the pandemic is in sight as Prime Minister Boris Johnson set out an aim to ease lockdown restrictions in a staged manner over the course of the next four months. Pubs and travel stocks were buoyed ahead of the announcement on Monday and the progress made on easing lockdown will be closely scrutinized for these reopening plays. As will the plan from Chancellor of the Exchequer Rishi Sunak in his budget, due on March 3 and where he is expected to spend billions more on state support for the economy in the next few months. New findings also show that Covid-19 shots provide a high level of protection after a single dose and there are encouraging early signs on the AstraZeneca vaccine's ability to tackle virus variants.

The Bloomberg Commodity Spot Index hit the highest level since March 2013, with investor appetite booming for everything from copper to corn. Oil extended its recent rally, helped by a weakening dollar, amid various predictions of further strength to come. Goldman Sachs thinks global demand will recover quicker than supply, trading house Socar is even more bullish on the outlook for crude prices and peer Trafigura anticipates markets will firm in coming months. Copper continues to grab attention in metal markets, topping $9,000 per ton for the first time in nine years and with strategists seeing commodities as a good way to play the reflation theme.

U.S. Democrats will begin the final push for President Joe Biden's $1.9 trillion stimulus bill this week, bidding to pass the package quickly before an earlier round of benefits runs out. It will mark the first test of the Democrats' full control of government since Donald Trump's impeachment trial and the House is planning to vote by the end of the week. Elsewhere, White House chief economic adviser Brian Deese said the key focus for the administration is the job market. The U.S. also marked the grim milestone of 500,000 Covid-19 deaths, though vaccine makers are set to indicate that some of the bottlenecks in supply which hit the immunization rollout should ease soon.

Asian stocks gained with U.S. equity futures and European futures trending higher, as bond yields and commodities stabilized somewhat. The earnings calendar gets a little busier again in Europe, topped by HSBC beating expectations and flagging more investments in its Asian business. We'll also have numbers from InterContinental Hotels, HeidelbergCement and chemicals companies Croda International and Covestro. Fed Chair Powell will give testimony to the Senate Banking Committee, where he is likely to face pressure to support Democratic lawmakers' stimulus plans.

And finally, here's what Garfield Reynolds is interested in this morning

Tech shares are looking like they have topped out for this cycle as investors focus on assets they expect to benefit the most from a return to post-pandemic normality. Even as semiconductor shortages highlight strong demand for the output of technology companies, the eye-catching valuations created by the stay-at-home economy and massive monetary easing look ripe for a comedown. The Nasdaq 100’s forward P/E spread to the S&P 500 is stalling at around a 7-point premium after hitting its widest since early 2008. And if anyone thinks that mean reversion in that figure will be driven by a realignment in earnings, rather than price, then a glance at the relative performance of the indexes signals trouble ahead for the tech benchmark. The Nasdaq exceeded its dot-com bubble peak versus the S&P 500 back in July, so some sustained underperformance for the former can be expected. 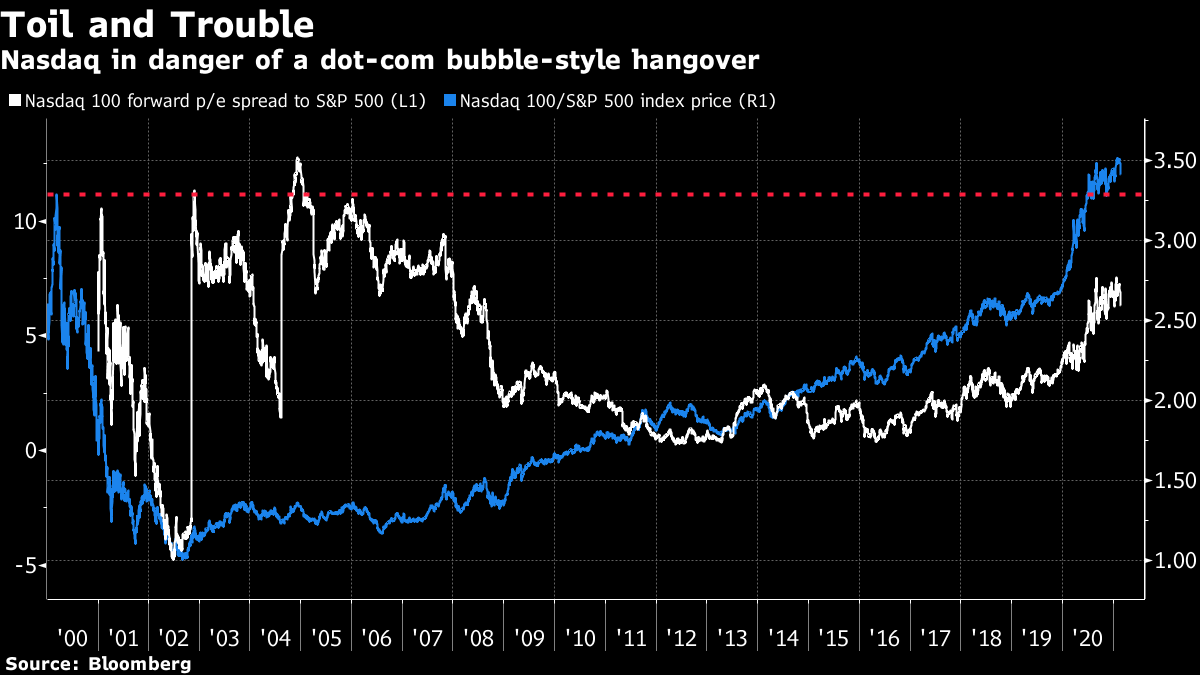 Garfield Reynolds is a Markets Live reporter and editor for Bloomberg News in Sydney.