Good morning. A stock rotation was soothed by the Fed, reopening plans continue to spark optimism and Bitcoin is bouncing back. Here’s what’s moving markets.

The equity rotation took hold this week, sending shares in high-flying sectors like tech and clean-energy lower and cyclical picks for an improving, reopening economy higher. Two of the most-cited areas for investors pointing out froth in markets — Tesla and Bitcoin — both dropped. Stock markets, however, bounced back following the supportive comments from Federal Reserve Chair Jerome Powell and as the Nasdaq 100 slumped, "buy the dip" started to trend on Twitter as day traders took to their screens. Still, growth stocks are having a rough month and momentum trades, one of the most crowded in the stock bull market, are falling out of favor. UBS, meanwhile, says be ready for another rotation.

Central banks and governments are offering few signals that the support being provided to virus-hit economies is going to end anytime soon. Fed Chair Jerome Powell soothed the market when he told the Senate Banking Committee that the central bank is nowhere close to pulling back on its support, even as he voiced expectations for a return to more normal, improved activity later in the year. The Bank of Canada similarly said it plans to maintain plenty of stimulus. U.K. Chancellor of the Exchequer Rishi Sunak, meanwhile, has pushed back a review of fiscal rules to later in the year to prioritize spending which will support a recovery.

One of the drivers of the rotation has been a slew of better news on reopening economies and rolling out Covid vaccines. In the U.S., a more optimistic view from virus modelers is starting to emerge on Covid-related deaths, with the decline in fatalities exceeding expectations. Drugmakers are also ramping up production in order to deliver more vaccine shots. In the U.K., which has already laid out its plans to slowly reopen the economy, the government is mulling vaccine passport options to help business open back up. German Chancellor Angela Merkel urged caution in reopening schools and businesses, though the European Union is speeding up its vaccine program after stumbling out of the gates.

Bitcoin has already had an extremely volatile week and it's only Wednesday. The cryptocurrency hit another record over the weekend before paring those gains and then slumping decisively on Tuesday as worries about the sustainability of its surge came to the surface. On Wednesday, it is rallying back above the $50,000 mark, helped by Ark Investment Management's Cathie Wood saying she is "very positive" on Bitcoin and welcoming its "healthy correction." Payments company Square also said it has bought more Bitcoin, while analysts covering Tesla worried its investment in the cryptocurrency will overshadow its electric-vehicle growth. Wood bought the dip in Tesla too.

Asian stocks tumbled on Wednesday, with Hong Kong dropping, while European and U.S. stock-futures are trending slightly lower. German GDP will top the economic calendar in Europe and there will be a few notable earnings reports from the likes of Lysol-maker Reckitt Benckiser, U.K. lender Lloyds Banking Group and sportswear group Puma. Oil prices fell after a report showing a surprise rise in U.S. crude stockpiles, while copper is hovering around 2011 highs following its recent rally.

The sudden jump in real yields and swings in bond markets are threatening to spill into equities as concern mounts about the implications of tighter financial conditions on global assets. A catch-all term incorporating a multitude of factors such as the cost of borrowing, access to liquidity and investor sentiment, monitoring financial conditions essentially boils down to judging whether we are in a risk-asset friendly easy money environment or not. A look at the little-changed gauges of financial conditions in both the U.S. and Europe from Bloomberg and Goldman Sachs — derived from a variety of factors from interest rates, foreign exchange, credit and equity markets — suggests we are still very much in easy money territory. But even a modest tightening to a more neutral level would be enough to result in lower overall equity returns, according to UBS. That could come in the second quarter as inflation and growth enthusiasm peaks and would be marked by a bottoming in real rates and credit spreads, strategists including Bhanu Baweja wrote in a note this week. Tightening financial conditions would signal the end of the liquidity “tailwind” that have been the biggest contributor to recent market gains, they said. 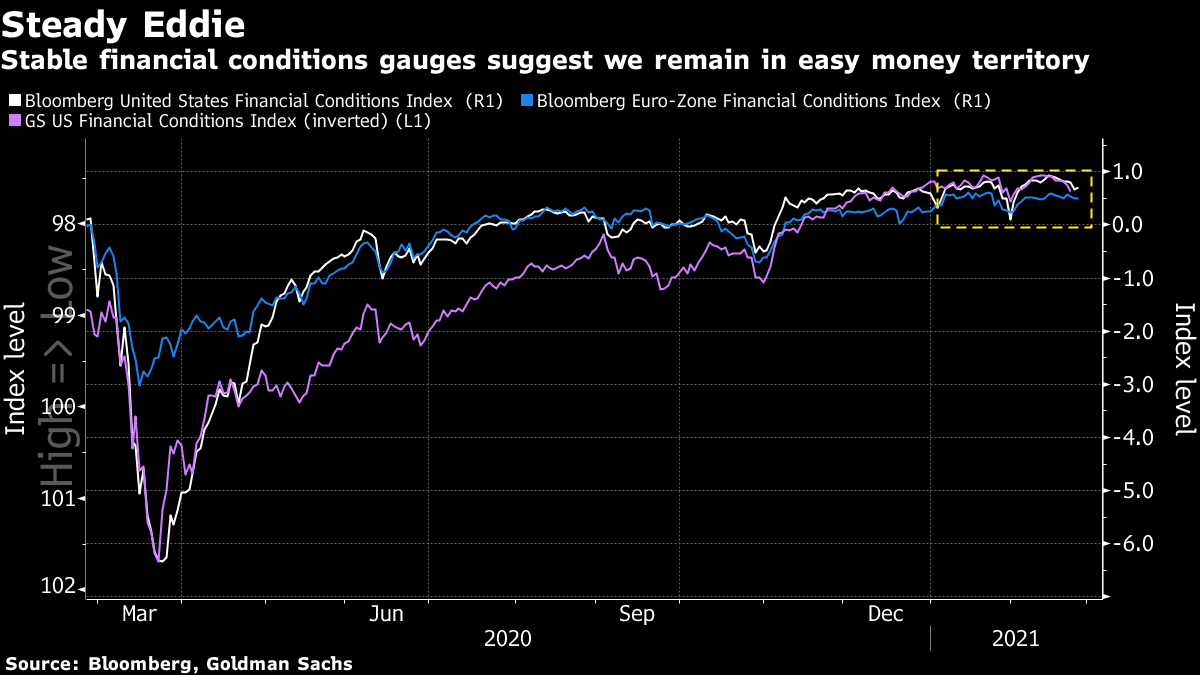