Pfizer and BioNTech’s Covid-19 vaccine was overwhelmingly effective against Covid-19 in a large study in Israel. The researchers matched each vaccinated person with someone who hadn’t gotten a shot, enabling the best analysis yet of whether extremely good results from an earlier clinical trial would hold up in the real world. It's not all positive virus news, though: Sweden says there’s a “high risk” of a new spike in infections, the Czech Republic is preparing a stricter lockdown to prevent the "total collapse" of its medical system and France is using targeted restrictions in certain hotspots, with Nice part of a region being largely shuttered over the coming two weekends. News from Switzerland was more cheerful, with the country set to allow non-essential shops, museums and outdoor sporting facilities to reopen from next month.

Two paper companies might be merging, and David Brent is nowhere to be seen. Mondi, a U.K. and South Africa-listed packaging firm, is exploring a potential takeover of British rival DS Smith, according to people familiar with the matter. While benefiting from a surge in demand for boxes due to booming e-commerce, the sector is also facing a margin squeeze from a jump in the price of recycled cardboard. DS Smith has a market value of more than 5 billion pounds.

Speculation is building over what will be included in next Wednesday's budget, with a report from a research group calling on Chancellor of the Exchequer Rishi Sunak to provide 70 billion pounds of targeted stimulus on top of extending existing pandemic support programs. That would add the equivalent of 5% of gross domestic product to the record borrowing that Sunak has amassed during the pandemic. Alongside retraining and jobs and environmental packages, Sunak could deliver a 9 billion-pound voucher program to boost high streets and local retailers, the research said. Media reports, meanwhile, suggest Sunak could cut the duty on pints in pubs.

Federal Reserve systems that execute millions of financial transactions a day — from payroll to tax refunds to interbank transfers — were disrupted for about four hours Wednesday by what appeared to be some sort of internal glitch. Systems were restored by the end of the day, but the outages raise questions about the resilience of such critical infrastructure, and follows two significant disruptions to the Fed’s payment services that occurred in 2019.

Beer giant AB-InBev missed quarterly profit estimates, while Primark retail-parent AB Foods and chemicals giant Bayer are among others reporting earnings from Europe, while U.S. chip giant Nvidia gave a bullish forecast on demand for chips used by video gamers and data center operators. Travel giant Booking's sales were as miserable as can be expected. Elsewhere, European Union leaders hold a video call on the pandemic response and durable goods data come from the U.S. later.

Investors looking for a cheap way to play the next pandemic — or preferably just a more hygiene conscious post-Covid world — should take a look at two of last year's superstar stocks. As my colleagues Chan Tien Hin and Abhishek Vishnoi pointed out Wednesday, a rout in Malaysian glove makers is deepening, sending valuations for some to rock-bottom levels. Top Glove, the world’s biggest, has slumped over 20% this month and is now trading on just 6-times forward earnings. It surged 300% last year. Supermax, which jumped almost 800% in 2020, is down about 26% this month and trades at under 5 times earnings. The stocks are being sold off amid increasingly encouraging news on vaccines and hopes many economies can soon reopen. But strategists continue to believe the companies' prospects remain strong and point to attractive dividend yields as another kicker. While nobody wants to return to a world where glove stocks are as en vogue as they were last year, the cheap valuations suggest they are at least worthy of further analysis for anyone building a pandemic-proof global portfolio. 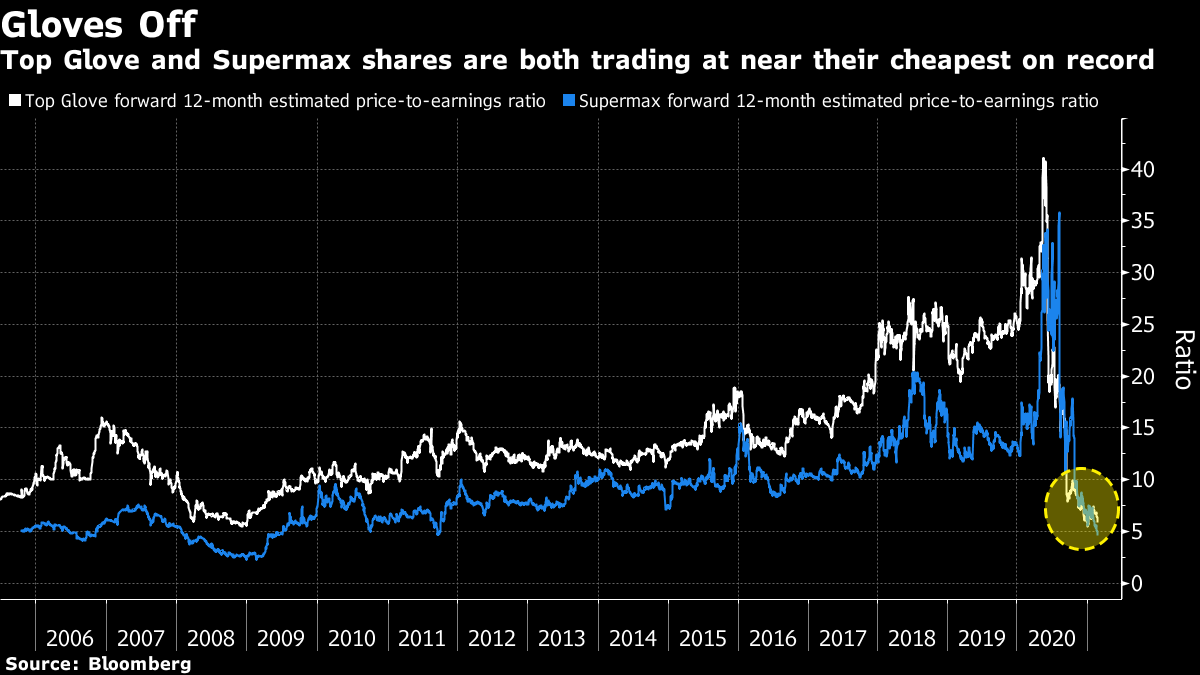