We'll learn the contents of Rishi Sunak's red briefcase later when the U.K. Chancellor of the Exchequer presents the country's budget. Sunak and colleagues have been setting the scene for possible tax increases and spending cuts to recoup some of the huge payouts on pandemic support measures like furlough, which is set to be extended. Still, most investors expect Sunak to hold fire on a corporate tax hike until some sort of normality has resumed, rather than risk hurting the recovery, though he may guide for a higher rate to come. For equity markets, housebuilders, mortgage lenders and pub and restaurant operators are some of the key sectors in focus today. Read our equities-based preview here.

German Chancellor Angela Merkel proposed a four-step lockdown easing strategy accompanied by widespread Covid-19 testing, amid political pressure to open up the euro area's largest economy. Restrictions on private meetings between households will be adjusted, while measures like shuttering non-essential stores, gyms and restaurants will be prolonged. The chancellor will meet state premiers later to discuss the moves. Meanwhile, Italy’s government has expanded restrictions as the country faces a surge in cases. The measures are the first approved by Prime Minister Mario Draghi’s new administration and include an extension to travel restrictions between regions as well as to a nighttime curfew.

Oil crept up after a three-day fall with the OPEC+ alliance said to be poised to agree on an output increase at its meeting this week. West Texas Intermediate gained 0.3% following the worst losing run since December as Brent also rose. The widespread view among the group is the market can absorb extra barrels, according to people familiar with the matter. That could put the group on track to implement the majority of the 1.5 million barrel-a-day output increase that’s up for debate on Thursday. Elsewhere, stock futures edge higher and Bitcoin rebounds from a bout of weakness sparked by fears of tougher regulatory oversight.

President Joe Biden suffered his first major setback in filling his cabinet Tuesday as Neera Tanden withdrew from consideration to lead the Office of Management and Budget after facing opposition. Tanden's selection in November touched off an angry backlash on the right and the left over sarcastic Twitter posts that were critical of her political opponents, including supporters of Senator Bernie Sanders of Vermont and as well as prominent Republicans.

U.S. ADP employment numbers set us up for Friday's nonfarm payrolls, while China data showed the services sector remains in expansion. Foreign exchange traders can look out for the Polish interest rate, which is expected to be unchanged. Insurance and investment services group Prudential reports earnings, as does online pharmacy Shop Apotheke. In the U.S., Intel shares slipped after the firm was told to pay more than $2 billion after losing a patent-infringement trial over technology related to chip-making. Finally, the quarterly review of the FTSE 100 index is due to be announced after the close of trading, with supermarket Morrison among the stocks facing potential relegation.

Don’t tell the vicar, but betting on bad is proving a much better investment strategy than voting with your conscience so far this year. A strong performance in February has catapulted a gauge of “vice” shares including casinos, distillers and cigarette makers into a commanding lead over a worldwide index of environmental-related stocks. The ISE SINdex Index is now up 17% year-to-date, compared to just a 1% rise in the FTSE Environmental Opportunities All-Share Index which itself is lagging the global stocks benchmark by over 2 percentage points. As my colleague Moxy Ying pointed out Wednesday, fears of higher interest rates have turned environmental shares from investor darlings into has-beens in recent weeks. Their outperformance last year and nosebleed valuations for many prominent ESG shares has left them vulnerable to the period of underperformance in growth shares that many strategists are calling for. Conversely, the alcohol, tobacco, and gaming brigade are getting a boost from reopening economies and the ongoing vaccine rollout. The sin stocks underperformed their environmental peers for much of last year, and socially-conscious investors will hope that trend can soon reassert itself. But while key sections of the ESG universe are primed to benefit from the stimulus-driven boost to green technologies, for the time being at least, the most successful investors are breaking bad. 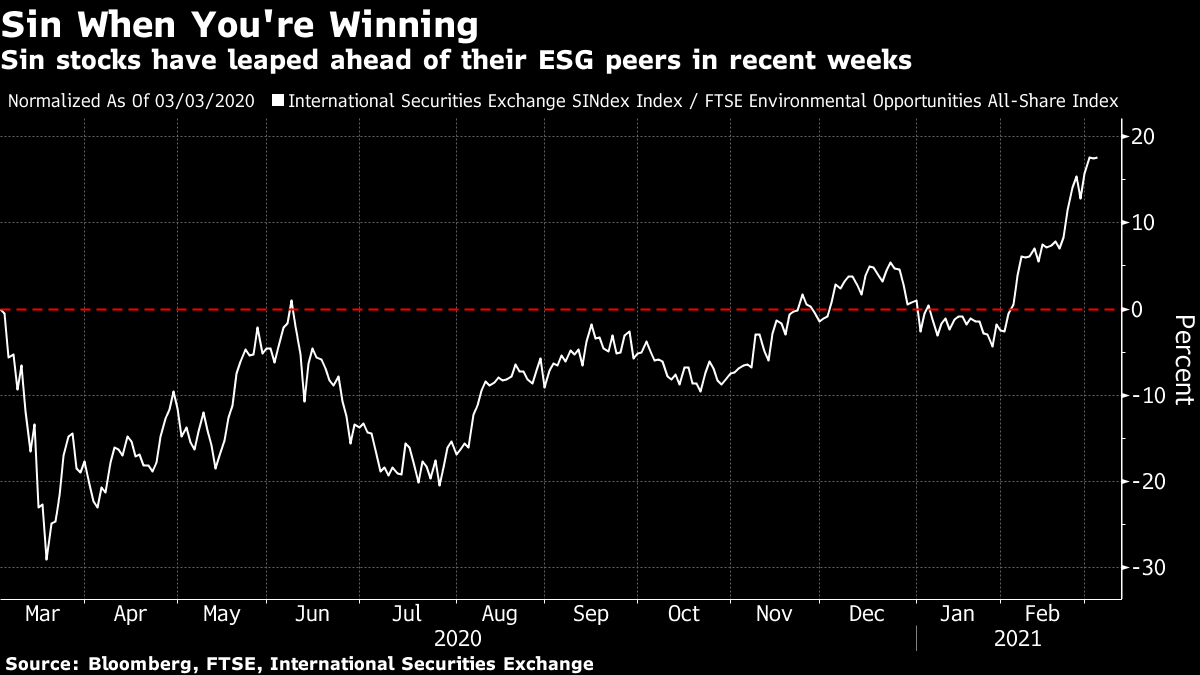 Where is the Stock Market Headed? S&P Target 4000? Here’s what JP Morgan Has to Say.

Where is the Stock Market Headed? S&P Target 4000? Here’s what JP Morgan Has to Say.