The U.K. angered the European Union by saying it would waive customs paperwork on food entering Northern Ireland until October, amid complaints from supermarkets about the looming requirements. The use of export documents under the Brexit deal was aimed at ensuring goods crossing into the EU respected its rules and avoiding creating a border on the island of Ireland. The European Commission said the bloc will take legal action, but Northern Ireland said the measure was needed to avoid "disruptive cliff edges." In other Brexit news, the U.K. budget included the announcement of eight English "freeports" – low-tariff zones aimed at encouraging investment.

Asian stocks fell as an overnight surge in sovereign bond yields once more dragged down equities. The MSCI AC Asia Pacific index lost as much as 2.4%, while European futures edged lower too. European Central Bank policy makers are downplaying concerns over yields ahead of next week's meeting. Oil, meanwhile, is moving higher ahead of a key OPEC+ meeting, with energy watchers left guessing about whether the market will get the April supply increase it’s been expecting. Elsewhere in commodities, hog futures rallied in Chicago as rising cases of the deadly African swine fever in China fueled supply concerns. Finally, Bitcoin rallied back above $50,000, a key psychological level.

Don't Call It a Comeback

Melvin Capital Management, the hedge fund known for having been slammed this year by retail investors that organized on social media to drive up stocks such as GameStop, is on the comeback trail. After adjusting its strategy, the firm pulled off an almost 22% gain in February, about eight times the return of the S&P 500. Melvin has stopped using certain derivatives that show up on quarterly filings, which previously allowed the firm to be singled out by the retail crowd. Still, the fund has some way to go before its investors break even, after the episode cost them more than $6 billion.

London’s virus infections are rising, even as the rate of decline of the disease nationally is slowing, a new study suggested. The Imperial College London survey showed 66 people per 10,000 people had the disease in London between Feb. 13 and Feb. 23. That was up from 53 people previously. U.K. Health Secretary Matt Hancock described the figures as “some cause for concern.” Elsewhere, Germany gave more details on its reopening plans, with book stores and gardening centers among business that can resume business from Monday, but the closure of hotels, restaurants and other non-essential retail outlets was extended until March 28.

Data comes in the form of Euro area unemployment and U.S. factory orders, while we'll get earnings from Ladbrokes bookmaker parent Entain and rival William Hill, along with updates from drugmaker Merck KGaA and aerospace and defense group Thales. Finally, Renishaw gained entry into the U.K.’s blue-chip FTSE 100 benchmark after news of an attempted sale by the engineer’s founders sent its shares surging earlier this week.

Bond bulls aghast at the debt selloff and holding out hope for some intervention from the Federal Reserve should probably not expect anything more than some jawboning for now. Speculation the Fed might look to revive Operation Twist — cutting back on Treasury bills and boosting holdings of long-term debt — may prove wide of the mark, if financial conditions are any guide. A look at the period leading up to the Twist program in 2011 shows the Bloomberg U.S. Financial Conditions Index in a significant downtrend ahead of that announcement, while today the gauge is largely stable. As Standard Chartered strategists John Davies and Steve Englander pointed out Wednesday, this suggests that economic and financial market conditions haven't deteriorated enough for Fed action. Traders should get a better idea of how the Fed views the recent bond moves on Thursday. Chair Jerome Powell is scheduled to discuss the economic outlook and can expect to be asked if the spike in yields warrants a response from the central bank. 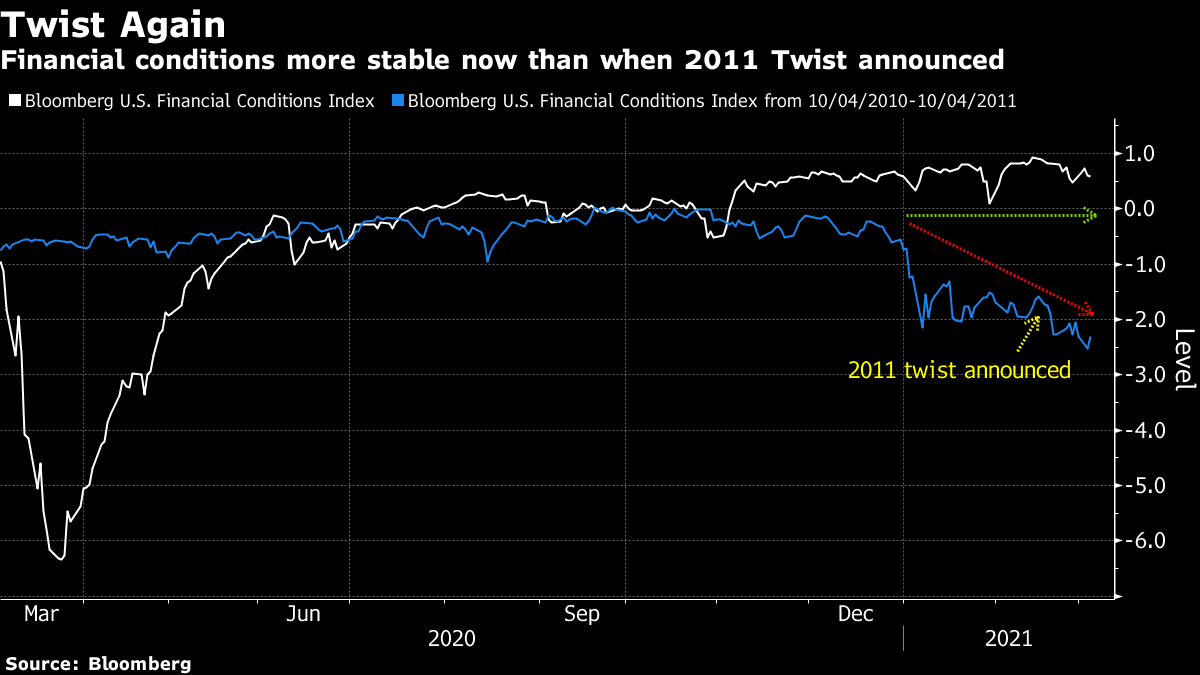 Need to Know: Here’s one asset in an ‘up crash’ — and the stocks tied to it are lagging behind the move

Need to Know: From tech to financials, here are dozens of inflation-sensitive stocks that crush it when prices are rising, from Credit Suisse.